Zoë Kravitz found herself trending on Twitter after she addressed the infamous Oscar slap of 2022. The Divergent alum made it clear that she was not in support of Will Smith slapping Chris Rock in defense of his wife, Jada Pinkett Smith. However, the conversation soon turned to Kravitz’s relationship with another member of the Smith family. Old interviews show that The Batman star made some remarks about a teenage Jaden Smith. Many people are condemning the comments as inappropriate given the age difference between the actors.

On Instagram, Zoë Kravitz reveals that she does not support Will Smith slapping Chis Rock at The Oscars 2022

“You don’t support him defending his wife?” an Instagram user asked in the comments? “Nope,” Kravitz replied plainly. It didn’t take long for people on Twitter to call out Kravitz for some of her past behavior involving the Smiths. Kravitz, Will, and Jaden were all cast in the film After Earth back in 2013. In an interview with V Magazine, per Daily Mail,Kravitz revealed that she found Jaden handsome and had to remind herself of the wide age gap between them.

‘The Batman’ star gushed over a 14-year-old Jaden Smith

“There were moments that I was hanging out with Jaden and thinking, I can’t believe you’re 14, I have to check myself, like what I say to you,” Kravitz revealed. “He has so much personality and so much swag, he is so much cooler than I am. And he’s so handsome, I was always like, when you’re older, you know, we’ll hang out … Nope, that’s inappropriate, you’re 14.”

What is the age difference between Jaden Smith and Zoë Kravitz?

But that wasn’t the last time that Kravitz got candid about her love for Jaden. At the premiere of Divergent in 2014, Kravitz interrupted an interview with Extra to call Jaden over to her. 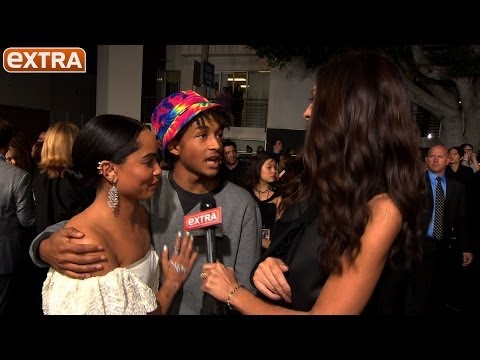 “I dragged him out tonight,” Kravitz said of Jaden. “This is my date.” The Kimi actor then begins rubbing Jaden’s chest and encouraging him not to leave the event. Eventually Jaden exits the interview and Kravitz apologizes for the interruption. “Sorry that’s like my love of my life,” she shared. “I dragged him out I texted him and I said ‘You have to come’ so he did. I love him.”