40 Guests, Plus a Covid-Safety Officer

Dr. Kyle Burton was a medical student at Harvard and just beginning at the Harvard Kennedy School’s master’s program in public policy when he first spotted Julie-Ann Hutchinson, also a new student in the program, in the fall of 2016.

“She definitely caught my eye,” he said, and after classes began, in a health policy elective that both took, she impressed him. “I knew I could learn a lot from her.”

“But we really didn’t start talking until midway through the semester, when I built up the courage to sit next to her,” said Dr. Burton, 29, who graduated from Howard University and studied biochemistry on a fellowship at Oxford University in England before starting at Harvard. He is now a second-year emergency medicine resident at Johns Hopkins Hospital in Baltimore.

Ms. Hutchinson, 26, said the two were soon doing schoolwork together and socializing in a group. She graduated from N.Y.U. and is now a health insurance specialist for rural hospitals in the innovation division of the federal government’s Centers for Medicare and Medicaid Services in Baltimore.

One evening in December, on the walk to her apartment and his shuttle-bus stop after class, the two ducked into a restaurant for coffee.

“She might even tell you she doesn’t remember it being a first date request,” he said. “But it happened to be on a Friday, and we were talking in a lot more depth, a lot more comfortably, than most people who are just going out to coffee. We talked about our lives, our childhood and our families, our interests and our passions.” 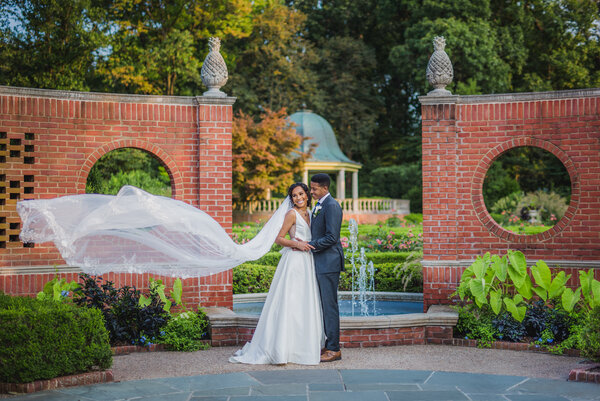 It didn’t take long, Dr. Burton said, for him to fall in love, which he realized toward the end of that month, at the school’s winter formal.

“I told her that she looked nice and she didn’t turn down my compliments,” he said. “She had always been stunning to me, but that’s when I knew I wanted this person to spend my life with.”

“We had really deep conversations about the purpose of life, and family,” he added. “It was nice to have that with someone.”

By the following summer, both said, they knew they were going to build a life together. They were by then working on a joint master’s thesis, and together planning the Kennedy School’s 15th annual Black Policy Conference. When his summer medical rotations took him to hospitals in Oakland, Calif., and Atlanta, she flew out each month to visit him.

“She felt like family, so I wanted her to be my family even more,” he said.

Ms. Hutchinson, who will add his surname to her own, said the decision to marry came naturally. “We both take our professions very seriously and family very seriously, and we’re both very committed people,” she said.

On Sept. 19, the two were married in St. Louis at the Missouri Botanical Garden. The Rev. Charles H.N. Bobo, a Baptist minister, officiated.

As health care professionals, the couple wanted to make sure that their wedding would be as pandemic-proof as possible. So in addition to instituting common coronavirus precautions, such as asking their 40 guests to be tested before the wedding and providing masks, gloves and hand sanitizer as party favors, the couple also hired help.

A covid-safety officer, to be precise. It was Ms. Hutchinson’s father’s suggestion, and while she initially balked at the notion that someone would be taking temperatures, shooing people apart who were violating social-distancing guidelines, and reminding guests to don a mask, she soon conceded the merit in the idea.

“I’ve had a ton of peace of mind ever since hiring this person,” she said. “At the end of the day, we are about safety more than anything else.”