Home » Fashion » All women deserve luxury, not only the slim

All women deserve luxury, not only the slim

Melbourne Fashion Week might be breaking the mould with the unique locations of its catwalk events at the MCG car park, the Aquarium, and across the city, but in one key area the event is a disappointment.

Look through the list of brands being represented in the luxury clothing category and you’ll discover they are missing almost anything that would fit an average size Australian woman. 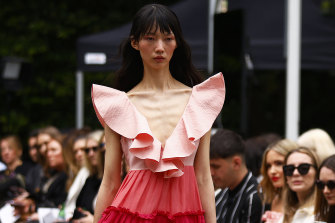 One company even has a separate section for sizes 18 to 22, not to be included with their core offering. I can only hope they don’t make segregation a habit in store.

So why do such a small percentage of brands go over this size? And why are we still talking about this in 2021?

We’ve heard time and again the enormous pressure on runway models to be rake thin – so what message is this sending to the next generation of women? 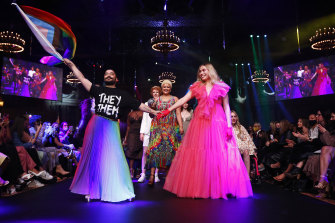 While there has been diversity reflected in Melbourne Fashion Week’s runway shows, most labels are failing to provide a full range of sizes. Credit:Getty Images

The number of girls with eating disorders in Victoria and New South Wales has almost doubled since the pandemic began.

A recent study by Swinburne University found an increase of more than 60 per cent in reported restrictive eating and a 30 per cent spike in binge eating in those with a history of eating disorders.

It also found a 30 per cent increase in these behaviours among people with no history of disordered eating, with lower self-esteem and negative body image to blame.

So with eating disorders at an all-time high, why are we continuing to see brands fail to go above size 14?

It shows how tone-deaf they are to what standard sizing is.

Does this mean that luxury for a woman over size 14 is limited only to accessories?

There was a lot of anger after Sydney’s Fashion Week earlier this year, where a number of models were invited – but only to sit in the audience.

Beautiful women, considered “bigger models” had been invited along as a PR exercise. It was a false show of diversity, as the shows that said they were being diverse were actually only using models that were a 12.

That’s not “plus size”, that’s a normal healthy woman.

Marilyn Monroe was famously a size 14, and a sex icon of her time.

There were newspaper articles at the time trying to tell you how to get a curvy body like hers.

We should be designing clothes that empower and elevate women. Clothes that make women feel good in their own skin – healthy, confident and strong.

We all want to feel amazing – irrespective of whether we are a size 8 or 24.

There is too much focus on a number, and a single digit one at that.

The industry needs to catch up with changing perceptions around body image and what is normal and beautiful.

It’s time to actually be diverse. Not just offer lip service about it.