Home » Fashion » Beyond Trend: An Honest Conversation About Fashion, Race, Elitism and Community

Beyond Trend: An Honest Conversation About Fashion, Race, Elitism and Community

It was just over a year ago, during the fall 2020 show season, that the fashion world gathered together in one place for the last time. Since then, the twin forces of the pandemic and the social justice movement have riven the industry, forcing it to take a new look at an old system and confront questions that had been papered over for years — especially its own history of racism.

So where are we now?

As the fall 2021 season drew to a close, The New York Times gathered four industry power players to address the question: Olivier Rousteing, the creative director of Balmain; Maria Raga, the chief executive of Depop, the social shopping platform; Pierpaolo Piccioli, the creative director of Valentino; and Zerina Akers, the stylist of “Black Is King” and founder of the digital marketplace Black-Owned Everything. The conversation has been edited and condensed.

Vanessa Friedman: Do you think fashion has made real progress in addressing social justice? Or is it mostly talk?

Olivier Rousteing: Black Lives Matter is a topic that is really important, but it’s not something new. I started my fight years and years and years ago. I started the Balmain Army hashtag, like, seven years ago to fight for my values and for what I believe in. At that time, no one was talking about diversity. It was only two or three years ago that people started to realize that I’m a Black designer and actually asked me things. I’ve always been the same, but now it’s the topic that people actually dare to talk about.

Zerina Akers: It is something you have to talk about, at least until we can get to the point where you don’t have to count numbers and quotas, and it’s not: “OK, I’ve met 33.3 percent of my quota for women in the company. We did it, we are here, we have done something for you.” Until it is second nature, it does have to be in the forefront. Because otherwise it will be, as it has been before, forgotten. 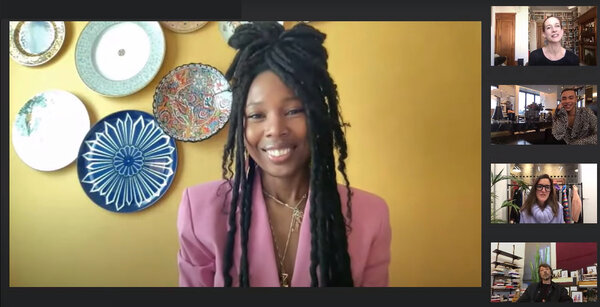 Maria Raga: When we started to look into diversity issues within our internal team, we realized that diversity is something you can improve by making sure you’ve got your target — we have quotas in terms of the representation — but inclusivity was different. We realized that just sponsoring Black-owned businesses was not enough. We needed to showcase more about their journey, how they got there, and create role models that will allow other people to feel included — not just showing off that there are multiple “types.”

Pierpaolo Piccioli: All of us were changed by this pandemic moment, and we all reflected about the system, about the industry, and I personally feel that it’s important to be radical, to be extreme in our actions. We have to really believe in something, and when you believe in something, you have to not to be proper and not be gentle but to be very, very focused. I am a father, so I feel it’s very important to talk about a world without any kind of boundaries.

Zerina: It’s also really important to remind ourselves where that movement started: with human bodies being harmed and injured. It then spawned, as a reaction, a move to celebrate the Black community, to put forward more Black designers as an answer, maybe, to not attacking a number of corporations.

Vanessa: Is the pressure to change coming from inside brands or from the people they serve: the ones who actually buy the clothes or at least follow the social media?

Maria: Ninety percent of our users are Gen Z. They are extremely activist, socially empowered individuals. They have a voice, and they want to use it, even though many of them only do it through social media. They are going to hold this industry to account, and if the industry wants to continue to be relevant with this audience, it needs to adapt their practice. An Australian seller told me that during the pandemic, she lost her job, and she’s super-passionate about thrifting. So she started her Depop shop, made money and used that to fund a documentary on mental health issues for the LGBTQ+ community.

Olivier: What happened with the pandemic made it clear that fashion was talking to the elite. But we realized that fashion needs more than just the people indoors for fashion shows. We need to be a community of the world — not separated, not divided.

Pierpaolo: Valentino was a brand very known for exclusivity, for a certain kind of lifestyle, and the real challenge was to move and to twist this brand into embracing a new world that is based on the idea of inclusivity. As a designer and as a person, I want to tell about myself, about my values, through the job I do. Two years ago, I did a couture show that was about Black beauty, to update that idea of couture as something relevant for a new world. When haute couture was born, magazines like Ebony or Jet were not allowed to even borrow the clothes to shoot them.

Olivier: When I arrived at Balmain, I saw a lot of criticism from the French because French don’t like to mention the word diversity. They kept saying, “It is there anyway, we don’t need to mention it.” There were some people in the French fashion crowd that didn’t believe at all in diversity. They thought, maybe, it was not associated with luxury. So I think the problem with those people is to try to explain to them that a color is not going to define the level of chic or not chic.

Zerina: Initially I made an Instagram page to share things that I love and that are beautiful. Then people wanted to have some sort of hub, so I decided to create Black Owned Everything, the website and the actual marketplace. That was really about: “OK, we’re able to give this visibility. Now how do we make it easier for the consumer to actually have a long-lasting, longstanding resource where they can come and (a) find really cool things and (b) support more independent creators?”

Vanessa: What hurdles have you encountered?

Olivier: I had two problems, in France, to be respected: my color and my youth. Because we all know that in France the older you are, the better you are. You know, it’s like wine. When the wine is too fresh, too young, it’s never the best one, you know?

Maria: It’s the same with women.

Pierpaolo: I think you have to give everyone the same opportunity. You have to stand up for everyone, not tick boxes. I feel that the idea of equality means you don’t think about progress when you have someone in front of you. You are just open with the human in front of you. But you can be an amplifier.

Vanessa: So what do you do now?

Olivier: In France there is also a lack of diversity in school. How many Black designers are there in France? It’s pretty obvious. So my role is to say, “If it happened to me, it can happen to you.” If you start from the school, you will start to create a new generation of people that will believe they can be part of a fashion world that has been really exclusive.

Pierpaolo: I don’t think you do manifestoes. I don’t deliver just clothes. I’m not interested in that. I’m interested in delivering values through fashion and through images. So if someone sees a picture and feels that the idea of equality is there, it’s not something you have to amplify with words. The image can be even stronger than words. My personal Instagram is a celebration of humanity. Every post has the name of the person I’m with in the picture.

You see the difference from different houses, how they get scared of having the finger pointed on them. You realize who believed in it during this year and who believed it for their entire career.

Zerina: Outwardly, many companies are trying. But what I’m seeing is that they’re offering a lot of Black creators a little bit of money to validate whatever they’re trying to do for the moment, and they’re not paying them enough in design fees or usage rights. So I’m hoping that people will be fairly compensated while they’re making these strides to diversify and be more inclusive. For a lot of companies it’s easier to get into these partnerships with Black creators for one to three years to buy some time until the next thing, but I’m hoping that it will be longer lasting this time.