Home » Fashion » Candidates With a History of Big Promises

Candidates With a History of Big Promises

Before their presidential aspirations became national news, six of the 23 declared candidates in the 2020 election were part of a different type of announcement published in The New York Times: their wedding announcement.

Two of Donald J. Trump’s weddings were reported in The Times. Pete Buttigieg, Eric Swalwell, Tulsi Gabbard, Michael Bennet and Bill Weld were in the weddings pages, too.

Mr. Buttigieg, the mayor of South Bend, Ind., and a former naval intelligence officer, entered the Democratic primary race in January 2019. He was 36 when he married Chasten Glezman, then 28, at the Episcopal Cathedral of St. James on June 16, 2018. He hopes to see Mr. Glezman, who took his husband’s name, become America’s First Gentleman. 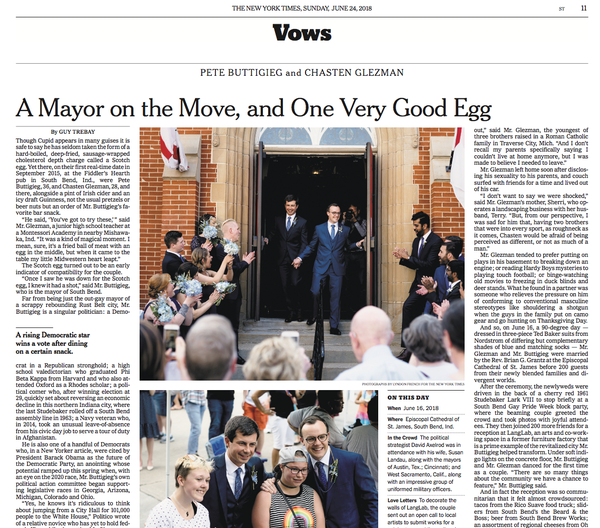 Mr. Swalwell, a Democratic congressman from California, was featured in The Times in October 2016. He was 35 when he married Brittany Ann Watts, then 32, at the Rene C. Davidson Courthouse in Oakland, Calif. His previous marriage ended in divorce.

Ms. Gabbard, a congresswoman from Hawaii, was 34 when her wedding to Abraham Williams, then 26, in Kahaluu, Hawaii, was reported in these pages in April 2015. Her announcement noted that she was a captain in the Hawaii National Guard 29th Brigade Combat Team who had served in Iraq.

Donald Trump, then 58, gave marriage a third try in January 2005 when he exchanged vows with the former model Melania Knauss, then 34, at Bethesda-by-the-Sea Episcopal Church in Palm Beach, Fla.

“When Ms. Knauss came down the aisle of the church to the strains of ‘Ave Maria,’ she looked magnificent,” The Times reported. “Her head was completely covered in a swath of white veil, which fell into a 16-foot train, and she carried a small diamond cross and rosary, with roses on either end.”

At the time, Mr. Trump was better known to younger audiences as a reality television star on “The Apprentice” than as a real estate developer. Certainly few at the time thought that Mr. Trump would become the nation’s 45th president.

But before that marriage, another one was featured in The Times, as Mr. Trump married Marla Ann Maples on Dec. 21, 1993, at the Plaza Hotel in New York.

“Dr. Arthur Caliandro of the Marble Collegiate Church performed the ceremony in the Grand Ballroom, on an altar decked with white orchids and white birches. Dripping from the birches were cut-glass teardrops,” according to The Times report.

“Covering the Trump-Maples nuptials, ‘an important personal moment in our lives,’ the couple said in a statement, were 17 television crews, a gush of gossip writers, and 90 paparazzi.”

The announcement mentioned that “the bridegroom’s previous marriage ended in divorce,” a reference to Mr. Trump and his first wife, Ivana Zelnickova, who was reportedly “keeping her cool on the ski slopes of Aspen.” Her marriage to Mr. Trump in 1977 was not reported in the weddings pages of The Times. Before divorcing in 1992, Mr. Trump and Ms. Zelnickova had three children, Donald Jr., Ivanka and Eric.

Mr. Bennet, a senator from Colorado was the most recent presidential hopeful to join the ever-growing Democratic field, making his announcement on May 2. A former counsel to the deputy attorney general of the United States, Mr. Bennet, then 32, married Susan Daggett, then 33, on Oct. 25, 1977, at Crystal Lake in Marianna, Ark.

Bill Weld, a former governor of Massachusetts and currently the only Republican willing to take on Mr. Trump in their party’s presidential primary, married Susan Roosevelt, a great‐granddaughter of President Theodore Roosevelt, in July 1975. Mr. Weld, whose name appeared in his wedding announcement as William Floyd Weld, met Ms. Roosevelt while both were studying for law degrees at Harvard. They married at Christ Episcopal Church in Oyster Bay, N.Y., and divorced in 2002.

Mr. Weld married his second wife, the writer and novelist Leslie Marshall, in 2005. (That announcement was not covered in our pages.)

Mr. Trump was also mentioned in The Times’s announcements of two of his children.

Donald Trump Jr. married Vanessa Haydon in November 2005 at Mar-a-Lago in Palm Beach, where the groom’s family has a home that has since become a more-than-winter White House. Judge Maryanne Trump Barry of the United States Court of Appeals for the Third Circuit, an aunt of the bridegroom, officiated. (In March 2018, Ms. Haydon Trump filed for divorce in a Manhattan court.)

Eric Trump’s wedding was not mentioned in The Times, but we read about it for sure. He married Lara Lea Yunaska on Nov. 8, 2014, also at Mar-a-Lago.

Should the Democratic hopeful Cory Booker become president — he is the only candidate in the field to have never married — he would be the first president since James Buchanan (1857-61) to turn the White House into a bachelor pad.

Mr. Booker, however, does have a significant other in the actress Rosario Dawson, and if they do decide to marry, and Mr. Booker would like to become the seventh presidential candidate to appear in these pages, he can always submit his announcement information.