WHEN YOU go to a salon for a treatment you expect to feel nothing but pampered and relaxed, however one woman was left horrified.

The woman, called Safia, posted the video to her TikTok account where it has been viewed over 600k times. 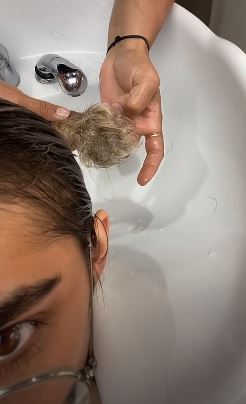 She filmed some of her hair salon experience and captioned the video: "My bleach hair went a little crazy."

As the hairdresser helps her from the sink station to the chair she holds up the ends of her hair which are completely matted together and looks like a hair ball.

As she holds up her ball of hair she says: "What in the world is this?"

Unfortunately for the young woman her hair is unsalvageable and the hairdresser had to cut it off.

After receiving a ton of questions on the video she later posted another one explaining what she originally went into the salon for and how her hair became so matted it had to be cut off.

She explains that she originally went to the salon to get her eyebrows done but then decided to get a treatment for her hair as well.

Safia claims she got the Olaplex treatment done on her hair, a popular brand often seen on TikTok for treating bleached hair, but alleges that the hairdresser did not comb her hair out properly beforehand or do a patch test.

"My hair matted together into a big knot and then they had to cut the hair off." She said.

To add insult to injury, the haircut she received was completely wonky and uneven.

She adds: "Now it is really uneven and it looks terrible, I don't know how they could have let me leave the salon like this.

"I managed to get a refund from them, but they didn't refund me for my eyebrows, I can't believe they still took money from that.

She goes on to say that she wasn't sure if it was the treatment itself which caused the damage or just the hairdresser.

People in the comments were shocked by two things in particular.

"She didn't even try to detangle it? I've gotten knots out of people's hair 10 times that size." Wrote one user

Another commented: "Honestly they probably could have tried detangling that… :/"

A third person said: "They didn't even trim it straight for you?"

"Did they leave your hair chopped like that!" Wrote another. 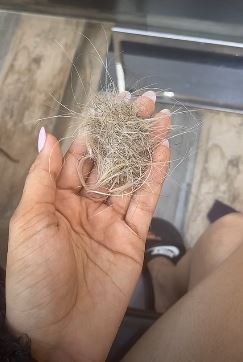 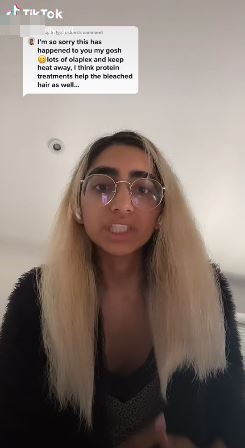 Plus a thrilled woman shows off her botox results but some say she looks ten years older.

And, meet the blokes who have spent £13k on botox and hair transplants as they are terrified of ageing.

Meanwhile, exerts reveal you've been showering all wrong and are not staying in there for long enough.