National Geographic’s third season of its “Genius” anthology series celebrates the legacy of Aretha Franklin, played by Academy Award-nominated actress Cynthia Erivo, in both the music world and the Civil Rights Movement. While the eight-part series, which debuts Sunday night, focuses on some of the pivotal moments in Franklin’s personal and professional life in the 1960s and 1970s, it also shows the important role that beauty played throughout her career.

The show enlisted makeup artist Terrell Mullin and hairstylist Coree Moreno to re-create some of Franklin’s iconic beauty looks for the series to show her beauty trajectory, from the early days of her career in the 1960s through her reign as the “Queen of Soul” in the ’70s.

“We sat down and really dove deep into each look and each era and made a strong decision on what represented Aretha best during those eras,” Moreno said. “We selected the looks that would fit best with the moments and we tried to create exact replicas of references.”

Moreno and Mullin pored over archival images and videos of Franklin to re-create the looks, referencing many of her actual performances, like on “The Steve Allen Show” in the 1960s and at Las Vegas’ The Aladdin Hotel in the late 1970s. The duo wanted to accurately portray Franklin’s beauty transformation between the 1960s and 1970s, from her early minimal beauty looks to what they consider her more “glam” years.

“She’s a fashion girl trying to fit a mold that was set by other Black entertainers at the time, like Diana Ross or The Supremes,” Moreno said. “[Her beauty] changed through the period of her life. She didn’t have one standard beauty look. It changed with whatever she was going through at the time.” 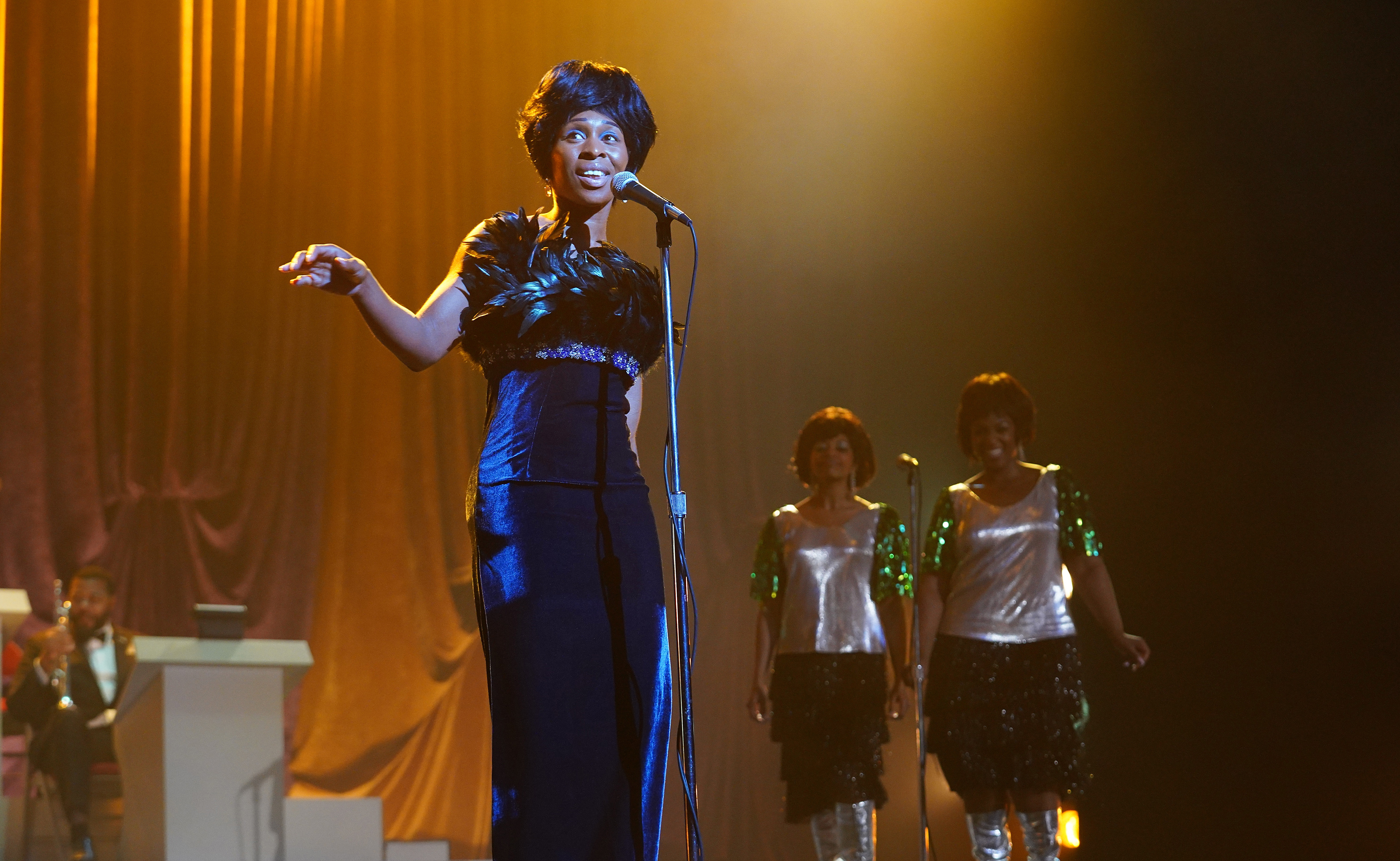 Mullin agreed with Moreno, adding: “I think we did a great job of storytelling throughout her life because at the beginning it was a bit more strict and raw and the makeup was more minimal and simplistic and the hair was more simple, so you see those ebbs and flows through her life.”

Mullin and Moreno re-created Franklin’s “simple” beauty look from the 1960s by giving Erivo the singer’s classic beehive hairstyle that became her go-to look at that period in her life. Erivo’s makeup focused on thin black eyebrows and winged eyeliner. Her makeup remained minimal for that time period aside from the bright blue eye shadow she would wear for her performances.

The most pivotal beauty moment in the show comes halfway through the series as Franklin becomes more involved in the Civil Rights Movement and begins working with leaders like Dr. Martin Luther King Jr. At this point, Franklin ditched her go-to beehive hairstyle and started wearing her hair in a natural afro.

“The standard [of her beauty] was definitely set at that time with her afro during the Civil Rights Movement,” Moreno said. “She was standing up for Black people and what they were going through at that time.”

For Mullin and Moreno, the different beauty looks were emblematic of what Franklin was going through at certain points in her life and showed the diversity of her beauty. Mullin stated the message he was trying to achieve through his makeup looks was “how diverse Black beauty is.”

“Just within the series alone she went through so many different aesthetics,” he continued. “People still know Aretha for all of that diversity, so I think the message behind it all is just showing that diversity among Black people and Black women specifically.”

The last few episodes of the series included another change in Franklin’s beauty look, where she leaned into the glamour of the 1970s disco era. Franklin now sported dyed red hair and changed up her makeup look to include colorful eyeshadow, voluminous eyelashes and pink lips. Franklin also developed an affinity for wigs at this stage in her career, especially for her performances.

The makeup and hair duo said that their work really helped Erivo get into character even before she put on Franklin’s costumes.

“Before she even got into wardrobe, we were making Aretha come to life with the wig and the makeup and the aesthetic,” Moreno said. “I think it aided Cynthia in looking in the mirror and seeing something different. You could tell by the way she delivered that it was a full circle moment.”

How 6 Female Entrepreneurs Found Success During the COVID-19 Pandemic

The Most Fashionable TV Shows of the 2021 Awards Season

How 11 Golden Globes Outfits Looked on the Runway