Duchess Meghan’s First Pregnancy Is Shaping Up to Be a Stylish One — See Her Best Maternity Fashion Moments Opens a New Window.

The Duchess of Sussex has become a fashion icon in her own right, just as sister-in-law Duchess Kate Opens a New Window. before her. Even during their pregnancies the two women dazzled in countless incredible looks. Choosing what was best for different occasions — ranging from formal wear to casual day outings — the two women shared certain commonalities and differed in a few (mostly subtle) ways.

For instance when it came to evening wear, they both typically chose loose-fitting gowns in materials with lots of movement. However, Duchess Meghan’s ensembles tended to be a bit bolder, in slightly brighter hues or decorated with sparkly embellishments.

This proved opposite for their London daywear. While Markle leaned toward more solid hues, Middleton was often seen in patterned A-line dresses, plaid coats and even animal prints every now and again.

One major difference we spotted was in their outwear. The Duchess of Cambridge has long been a fan of coatdresses, wearing them in all different shapes and shades. The former Suits star, on the other hand, would often wear her coats open, showing off the frock underneath.

However, we noticed a couple of styling tricks Opens a New Window. both women enlisted during their pregnancy that proved to be quite beneficial for their overall sophisticated look. What are they? Scroll through to find out — and to see how the Duchess’ each adopted maternity dressing Opens a New Window. for different occasions. 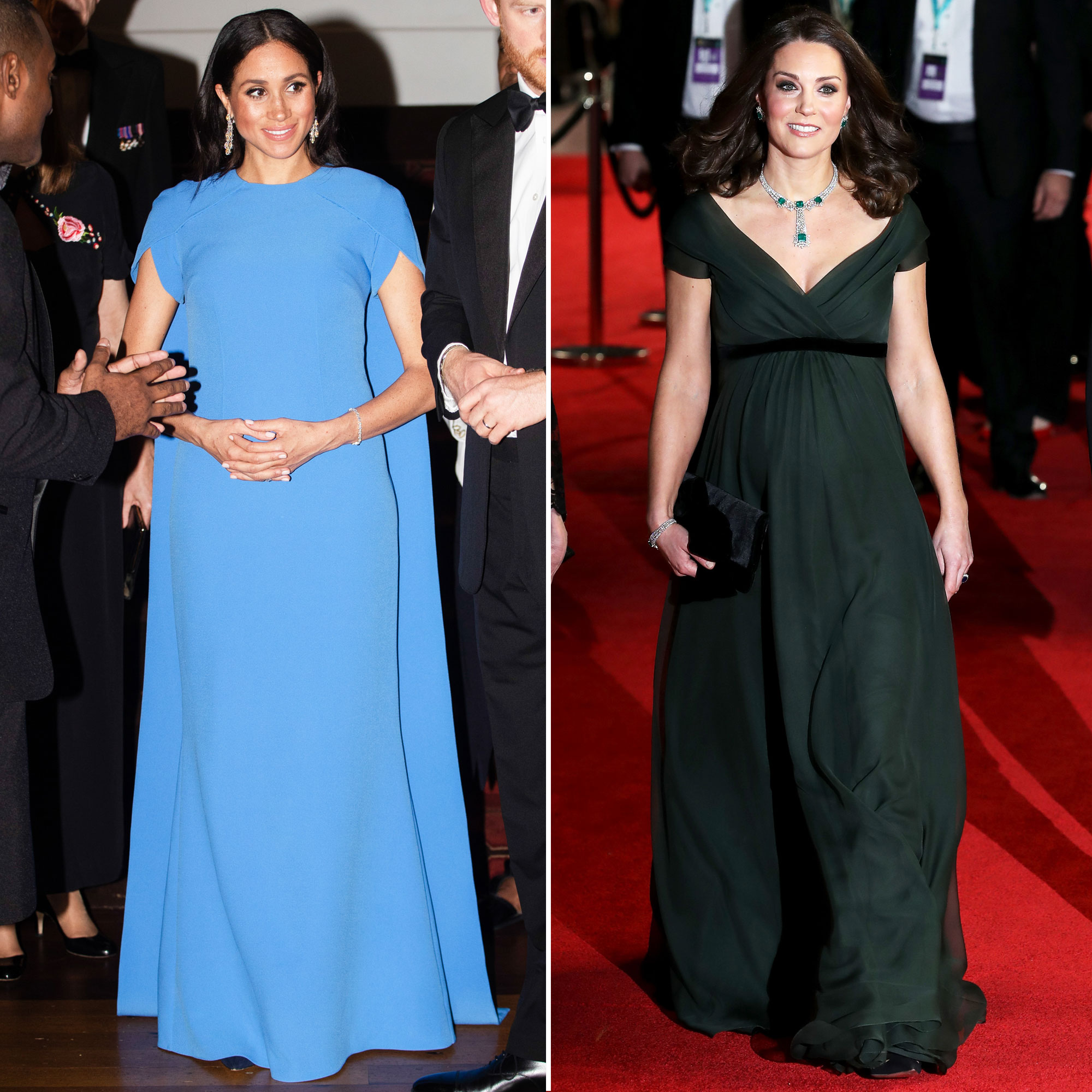 Both women liked their formal wear to be loose and full of movement. However, the Suits actress’ favored more glam styles that featured sparkly embellishments or bright colors, like this blue cape gown she wore to the Fiji state dinner on October 23, 2018. The mom-of-three, on the other hand. usually kept hers more paired down, wearing darker shades like her forrest green Jenny Packham BAFTA gown she sported on February 18, 2018. 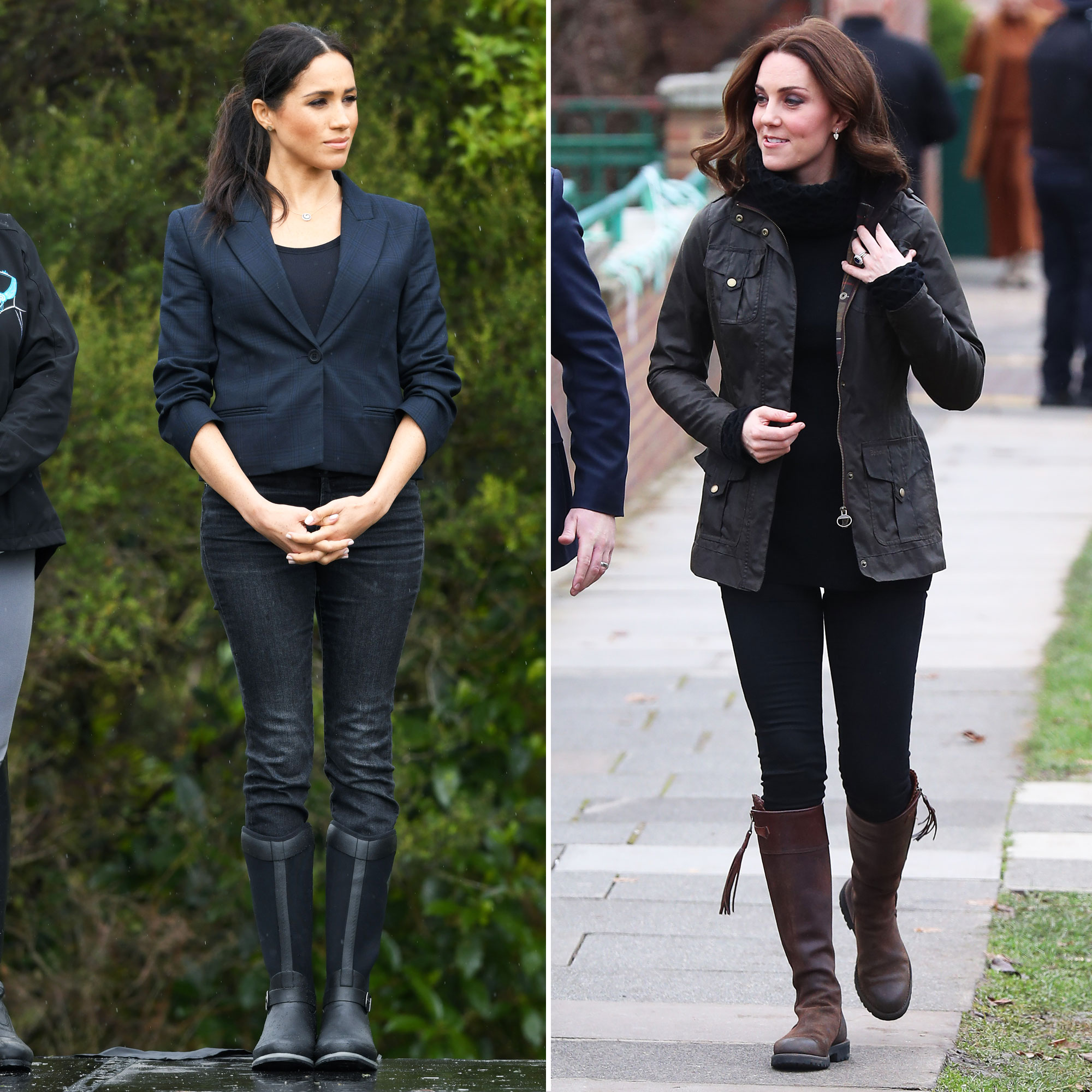 Not that they are spotted in jeans often, but every now and again the Duchesses would have to wear something functional and practical. To keep it chic and clean, this often meant riding boots and pants for the both of them. While Harry’s wife would often top off her look with a blazer (as seen when visiting New Zealand on October 20, 2018), William’s other half seemed to opt for field jackets like hers on November 29, 2017. 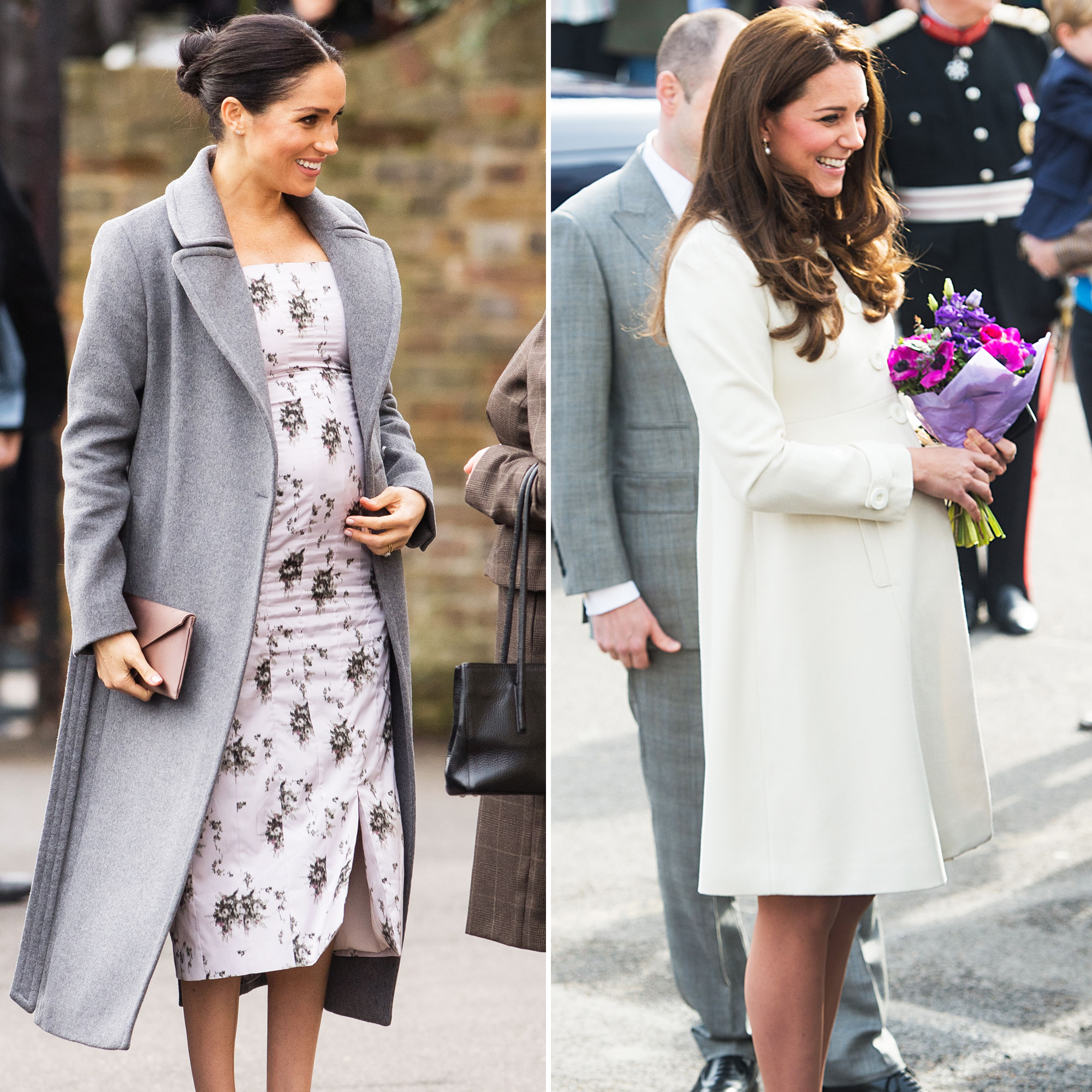 We noticed that the biggest way the two women’s pregnancy style differed was with their outwear choices. Kate often opted for a coatdress or an overcoat that was buttoned up to look like one, like this white pick she wore when visiting Downton Abbey at Ealing Studios on March 12, 2015. But Meghan’s go-to was typically to wear hers open , as she did with this grey one she tossed on for her  December 18, 2018, visit to the Royal Variety Charity’s House. 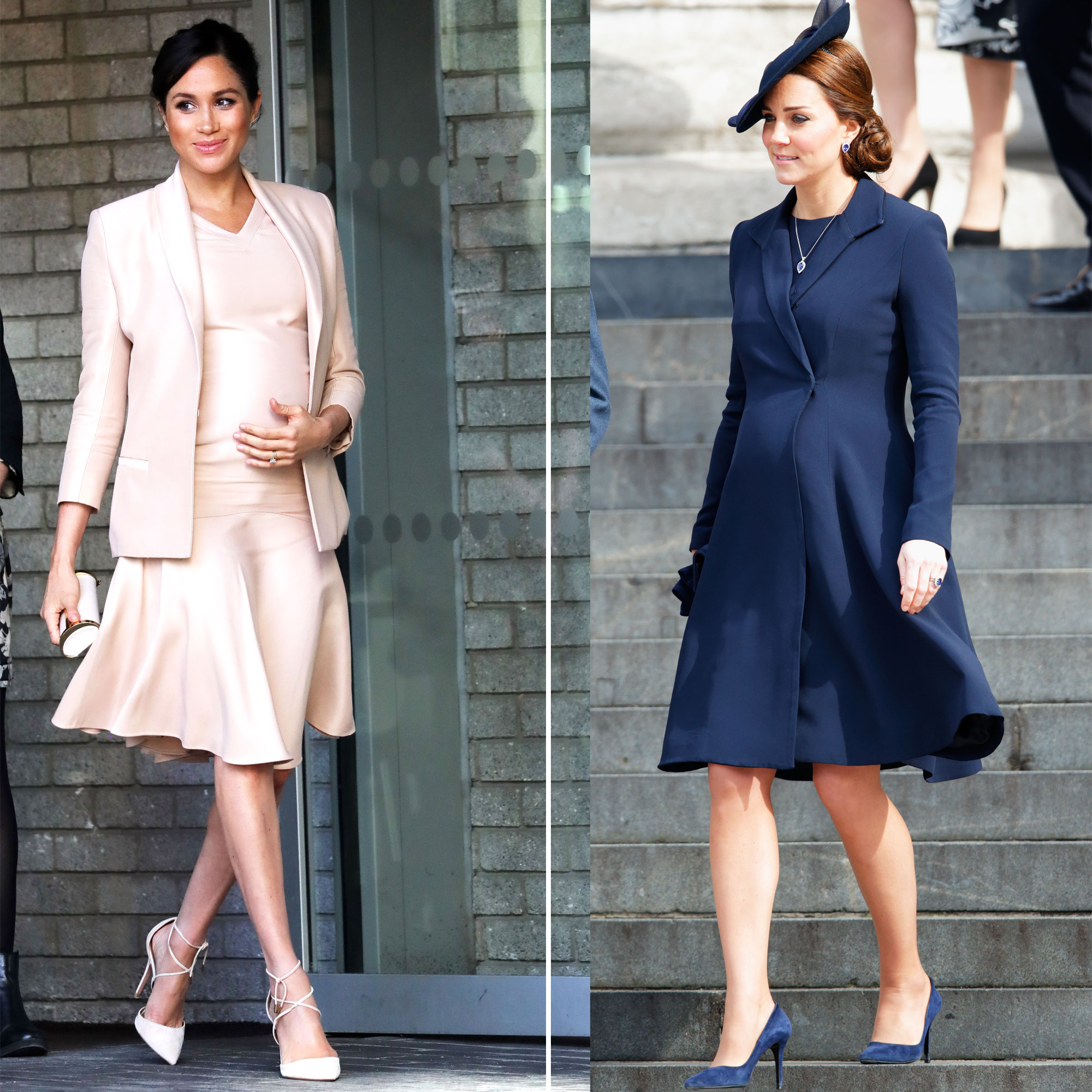 Neither of the women shied away from rocking a matchy-matchy look. This smart styling tip is an instant way to elevate any outfit. The Duchess of Sussex nailed it in a soft pink Brandon Maxwell fit-and-flare dress and matching blazer on January 30, 2019, and the Duchess of Cambridge also employed the tactic in all navy from her hat to her pumps at the Service of Commemoration on March 13, 2015. 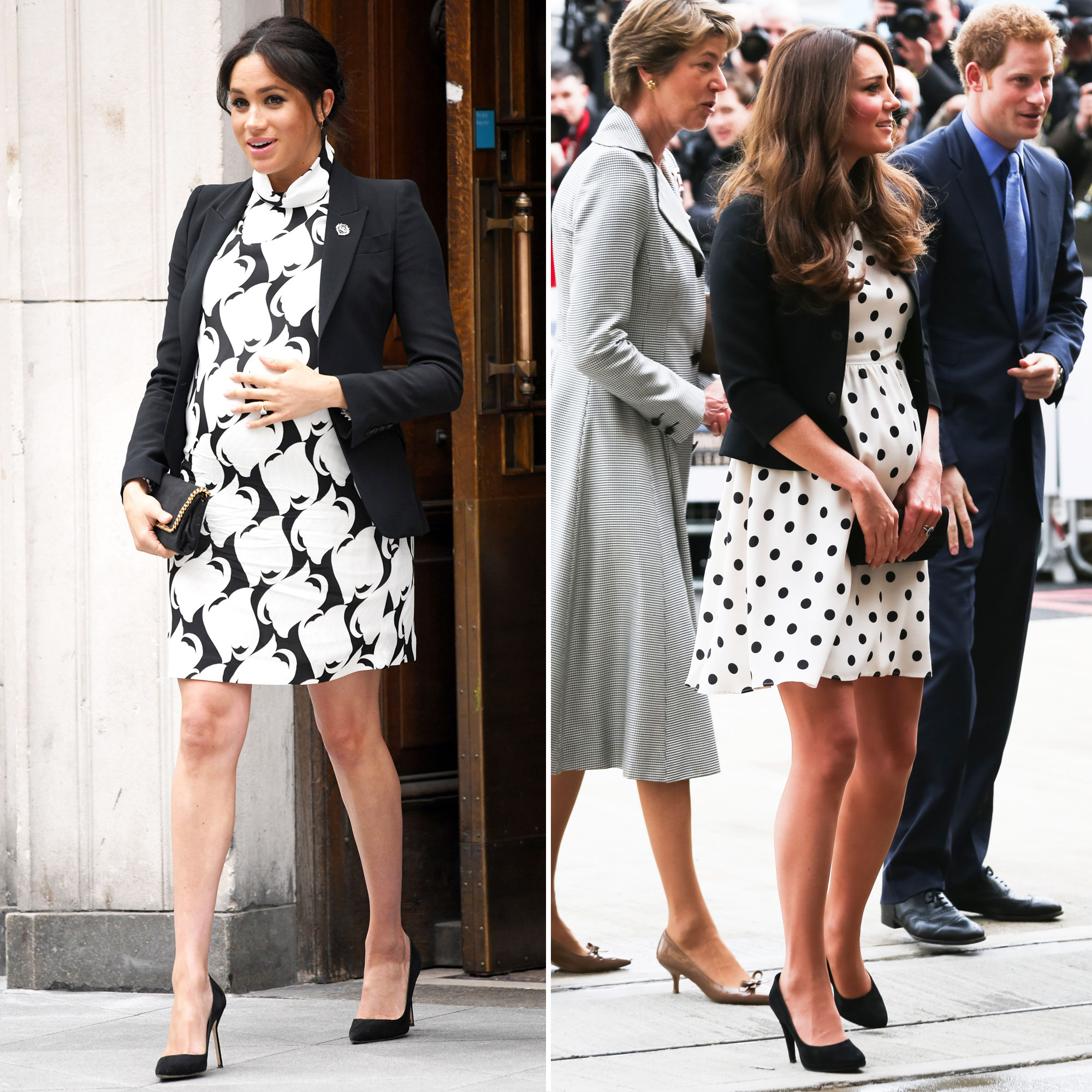 A little styling trick both women used to slim-out their figures was to opt for shorter hemlines. Pairing a mid-thigh cut with high heels showed off a little leg, making them appear leaner and longer. Matching in black and white, Markle wore this Reiss minidress when visiting the Queen’s Commonwealth Trust at King’s College on March 8, while Middleton visited Warner Bros. studios on April 26, 2013 in her Topshop polka dot dress — both mini and both adorable.