Home » Fashion » How the Harp Got Hip

How the Harp Got Hip

“I am not the quintessential image of a harpist,” said Brandee Younger, 37, a classically trained harpist, composer, and educator. Ms. Younger, who lives in Harlem, smiled audibly as she enumerated the common stereotypes of the stringed instrument. “You’re blond, your eyes are blue … little naked baby angels,” she said, joking. “It’s just so not down to earth.”

Bringing the harp to the masses has been a central goal of Ms. Younger’s career. Her jazz-infused compositions have been featured on works by pop and R&B’s most recognizable names including Beyoncé, Stevie Wonder, John Legend and Lauryn Hill.

For centuries the harp has been lodged in the domain of “serious” music — a niche instrument, perhaps dusted off for weddings and bottomless mimosa brunches. With such an entrenched reputation, could the harp ever be hip? 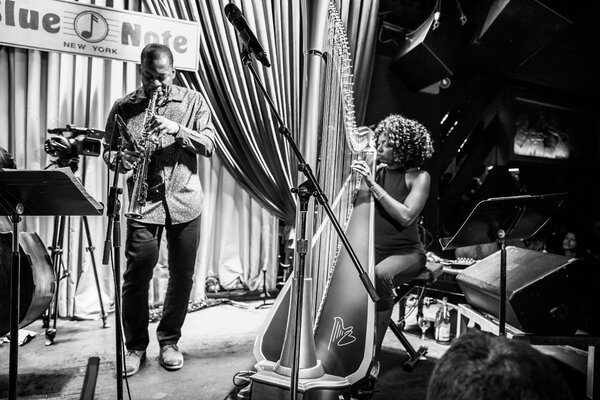 It’s not without precedent. Lizzo gave the flute a boost back in 2018 when she declared on Instagram “HO AND FLUTE ARE LIFE.” Videos of the singer twerking while flawlessly tooting rap melodies quickly went viral, challenging stereotypical connotations of the flute as an instrument of purity and innocence.

Ms. Younger’s love affair with the instrument began when she was a girl growing up in the suburban enclave of Hempstead, N.Y., and heard a father’s colleague play; she started lessons as a teenager. “The harp is one of the few instruments that creates sound with direct touch,” she said. “There’s no barrier between you and the sound.”

But as her musical career progressed, instead of solemnly plucking chamber music by Claude Debussy or Carlos Salzedo, Ms. Younger wanted to play the soulful music of her idols Alice Coltrane and Dorothy Ashby, two Black female jazz harpists she has called the “lodestars” of her career.

“Not only are they playing this music that is just killing, but I want to play this stuff because it’s so cool,” Ms. Younger said. “They were women. They were Black. I was just connected to them on so many different levels.”

If Ms. Coltrane’s liquid glissandos provided Ms. Younger ways to make harp music youthful and fresh, it was Ms. Ashby’s transcendence of genre that set the blueprint for her career. Fans of rap and hip-hop have been unwittingly listening to Ms. Ashby’s music for decades, with samples of her work used by Jay-Z, Mac Miller, Drake and other big names.

Ms. Younger’s most recent album, “Force Majeure,” is a collection of livestream performances recorded with her longtime collaborator bassist Dezron Douglas. The album features an original jazz- and gospel-tinged composition, as well as covers of hit songs from Kate Bush and “Sesame Street.”

“We’re making music for people,” Ms. Younger said. “Sometimes you have to branch out of what you are used to doing or what you’re trained to do.”

The harp is one of the oldest known instruments, and was widely played in ancient Egyptian and Mesopotamian cultures. Later it became popular among the royal and aristocratic classes of Europe — Marie Antoinette regularly entertained guests at the French Court with her ornate gilded harp — and became a fixture in Victorian-era salons. Exhibiting proficiency in musical instruments like the harp was one way for women to prove they were worthy marriage material.

The association of the harp with chastity and virtue has dogged modern players. Joanna Newsom, the indie singer-songwriter who catapulted the harp onto Billboard music charts with her acclaimed 2006 album, “Ys,” has fought the stereotype of its music being all fairy tales and unicorns.

“It’s an infantilizing thing that happens,” Ms. Newsom told the British press upon the release of her 2015 album, “Divers.” “The language is minimizing and narrowing of possible narrative depth.”

Marilu Donovan, 33, a harpist in New York, is also over the instrument’s prudish rep. “It just becomes exhausting,” she said. “It’s an instrument. It’s multifaceted. It can have so many different feels to it and still be beautiful.”

Ms. Donovan performs with Adam Markiewicz, a violinist and vocalist, under the name LEYA. The duo brings a punk mentality to their experimental work, which has been described by Pitchfork as “eerie, beckoning and tinged with horror.” Ms. Donovan achieves this effect through unorthodox tunings and amplifications. The result creates an unearthly dissonance: the auditory equivalent of awakening in the fog of a bad dream only to discover you’re still trapped in the nightmare.

LEYA collaborates with their peers in the experimental music scene, recording tracks with Eartheater, a musician in Queens, and the Brooklyn black metal band Liturgy. Mary Lattimore, another contemporary harpist, also collaborates with musicians from other genres, including prominent indie rockers like Sonic Youth’s Thurston Moore and the Violators’ Steve Gunn and Kurt Vile.

“When I started playing with LEYA we were playing these little noise shows in basements,” Ms. Donovan said of the band’s early touring appearances, giving a virtual tour of her apartment over Zoom.

She stopped next to two towering pedal harps — one ivory and one walnut — made by the famed Lyon and Healy music company in Chicago. A harp from the manufacturer can weigh more than 80 pounds and costs, on average, over $30,000; $50,000 if it’s gilded. It’s the older ivory harp that Ms. Donovan takes touring. “People would spill their beer on my harp,” she said. “People have fought during our shows.”

The harp’s delicate curves have also found a wider audience on social media. Hannah Stater, a music student at the University of Michigan who goes by @hannah_harpist on TikTok, has accumulated hundreds of thousands of followers and millions of likes on the platform. Kristan Toczko, a Canadian harpist, was praised by the gaming community after Reddit went wild for her rendition of the Halo video game’s theme song.

When Madison Calley, who is in her 20s, started posting videos of her own harp performances to her social media profiles, she didn’t expect to have even a fraction of that success.

Ms. Calley, who lives in Los Angeles, had completed a recording session for Ariana Grande’s “Positions” album. Then came the coronavirus and canceled concerts. Ms. Calley turned to Instagram to keep her skills sharp.

A typical video shows Ms. Calley playing pop and R&B on a towering champagne-hued pedal harp in her spacious living room, dotted with various greenery and flooded with natural light. One of her earliest clips, a cover of Alicia Keys’s song “Diary,” was noticed by Ms. Keys, who reposted Ms. Calley’s rendition to her millions of followers.

“I think once the pandemic hit everyone was on their phones looking for some escapism from all the craziness going on in the world,” Ms. Calley said. “I had no idea it would take off the way it has.”

Soon, producers from the Latin Grammys were calling with an offer to play in the 2020 awards show. Ms. Calley shimmers in a glittering gold evening gown as she initiates the orchestral opening for the Colombian singer-songwriter Karol G’s performance of “Tusa,” which was nominated for Song of the Year.

Ms. Calley also appeared onstage for the rapper Roddy Ricch’s musical performance of “Heartless” on Sunday’s 63rd annual Grammy Awards broadcast. “A lot of interesting and amazing opportunities have come from social media,” Ms. Calley said. She has taken on a small group of students — all women of color — hoping to instill enthusiasm for the harp.

If social media has made the harp more approachable to music fans, then advances in production that make the instrument more portable — and affordable — have also lowered the barriers to entry for beginning players.

One such purveyor of budget-friendly harps is Backyard Music in Willimantic, Conn., owned by David Magnuson. The Fireside Folk Harp, which costs $169 and can be shipped ready made or as a D.I.Y. kit, has become a popular choice among harp hobbyists and beginner musicians.

Mr. Magnuson said he began to notice a shift in harp sales within the last few years, a trend that accelerated with the onset of the pandemic. Last year alone, he said, his Etsy store sold some 300 harps. “It was shocking to me,” Mr. Magnuson said. “It has really picked up and hasn’t slowed down at all.”

Antonio Arosemena, 35, is one of Backyard Music’s customers. Mr. Arosemena, who teaches music at the East Ramapo School District in New York, needed an affordable practice instrument he could use with his 6-year-old son, Luca.

As a toddler, the young boy gravitated toward his father’s harpsichord — but he wasn’t interested in touching the keyboard. He wanted to get at the strings underneath the hood.

His search for a suitable starter harp initially led him to a manufacturer in Pakistan. But as his son’s playing progressed, Mr. Arosemena realized he needed something more portable that he could bring with him on road trips to keep up his practice routine.

So Mr. Arosemena ordered the Fireside harp kit. He documented the entire process on Instagram and said it took him only a few days to build the three-piece hardwood kit; the most difficult part was installing the 22 strings. “That went from being my instrument to help him with rhythm to being his practice instrument,” he said.

A recent Instagram post shows Luca, who started kindergarten last fall, dutifully reading sheet music as he practices arpeggios on the harp from the comfort of his living room couch. As he cleanly plucks the last note, he turns toward the camera and shyly reveals a smile, celebrating his musical triumph.