Home » Fashion » How to become a stylish duo? Look to Anna Wintour and Bill Nighy at 73

How to become a stylish duo? Look to Anna Wintour and Bill Nighy at 73

There is an art to appearing in public together, especially if you are likely to be photographed. The challenge is to complement each other without clashing, or looking offensively matchy-matchy. Many get it wrong. Think of Justin Timberlake and Britney Spears, head to toe in denim. Or Elon Musk and Grimes dressed as sci-fi chess pieces for the Met Gala in 2018. Not to mention the countless Beckham horrors. 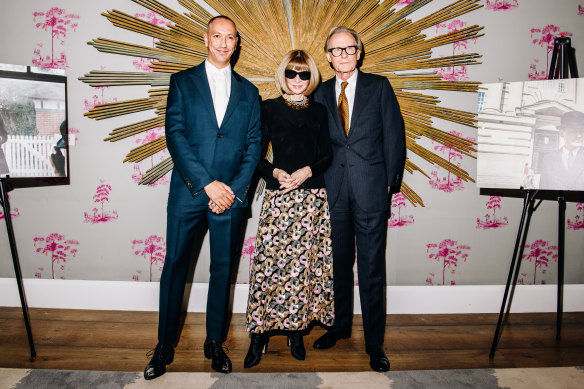 If you are headed for a red carpet, you have to think these things through. When you are standing next to each other, you want onlookers to think “That makes sense”, or even, “What an attractive couple”. You do not want people thinking “He must be rich” or “What a shame the airline lost her luggage”.

In this, as in so much else, we can take advice from those more experienced. In a world of ever-faster fashion, trust it to the over-70s to show the rest of us how it is done. Two septuagenarians in particular: Anna Wintour, 73, and Bill Nighy, who turned 73 on Monday. The coolest celebrity pairing of the year has a combined age of 146.

I say pairing, because we have no formal confirmation that they are a couple. They are far too classy a duo for that. There is only circumstantial evidence, a sequence of sightings that could be mere coincidence. If your wife were photographed eating with Bill Nighy in Rome several times, as perhaps she has been in her dreams, you would be entitled to ask a few questions. But neither he nor Wintour is married. Who they spend time with would be none of our business, were it not so… public.

They were spotted together in New York last week, at a screening of Nighy’s new film, Living. They looked immaculate. He was in a navy blue pinstripe suit with a gold-yellow tie, black Oxfords, with regulation thick-framed glasses. She wore a black jumper and embroidered skirt, with her regulation sunglasses. Neither dominated the other, both were smart but unflashy. Taken together, their look said: relax, we know what we’re doing. (Presumably she takes the shades off for the screening itself, or else finds herself watching a lot of moody noirs.) 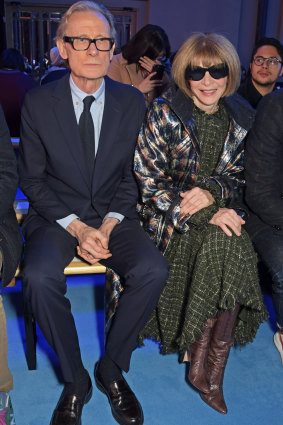 This is hardly the first time they have been spotted a deux. The past decade has thrown up Anna and Bill on Piccadilly. Anna and Bill eating together in Rome, several times. Anna and Bill at openings, receptions, in cafes and restaurants. At other times Wintour has been wearing something more striking, but next to Nighy’s uniform dark suit, even leopard-print looks poised.

The latest outing feels more couply than some of their previous. If you are an actor launching your awards-season campaign, there are few better statements than stepping out with the world’s most famous magazine editor.

It goes without saying that Wintour, who has been editor of Vogue since 1988, has exceptional personal style, but Nighy’s no slouch either. Aside from their comparable age and personal circumstances – both have grown-up children from previous marriages, and grandchildren – there are stylistic similarities, too. Both decided on their look early on, and stuck to it. Working in the worlds of fashion and film, where it’s more usual to be blown around by hype like a weathervane, this has long lended them gravitas.

Wintour is very specific about everything she wears: sleeves, a midi hemline, Manolo shoes or knee-high boots, patterned dresses. Her bob and sunglasses have become a shorthand not just for her own look, but for the general concept of a fashion editor, just as a mohican stands for punk.

Nighy, similarly, worked out how he wanted to look as a teen. Growing up in Caterham, Surrey, he idolised the mods, with their tight suits. When he was 16 he moved to Paris with dreams of becoming a writer, and there is something of the writer about his precise, elegant look. When I interviewed him earlier this year – an assignment for which I panicked about my own outfit as though it were prom night – he half-joked that he thought men’s fashion had been going downhill since 1947.

His are not the boxy, English-style Savile Row numbers, but lounge suits from John Pearse in Soho or Ritchie Charlton at Hayward in Mayfair. He is not unaware of more recent trends. He told me he admired the Swedish menswear brand Our Legacy. He just chooses to wear suits. Sometimes he’ll go without a tie, for a treat. But mostly, he knows what he likes, and what he likes is a suit.

True, he and Wintour have other advantages. Both of them have access to the finer things, and the money to pay for them. One imagines Wintour gets the odd store discount. Nighy has said his luxury is dry-cleaning. They are both thin, which helps, especially as you get older. In his series Searching for Italy on BBC Two, Stanley Tucci, 62, has been demonstrating that low body-fat and simple, relaxed tailoring can do wonders for a man approaching pension age.

Ultimately, what is appealing about them as a duo is not so much their personal style as the enigma that surrounds them. Both of them pull off the trick of being highly visible but somewhat mysterious. Nighy, in particular, is one of the most commonly sighted celebrities in London, a friendly presence, always ready for a chat or a photograph. Wintour attends dozens, if not hundreds, of events per year. There remains something inscrutable about both of them. In such a photographed age, it is a nearly miraculous achievement. It is not a coincidence that neither of them does social media.

Anna Wintour and Bill Nighy both know there is a difference between being a public figure and letting it all hang out. In other words: what you wear is not nearly as important as how.