Inside the strong bond between Australia’s top fashion prize winners

The close-knit nature of the country’s leading designers can be seen in the interwoven work of the winners of the 2021 Australian Fashion Laureate. At the top of the chosen family tree sits the prismatic matriarch Linda Jackson, who was presented with the Lifetime Achievement Award at today’s ceremony in Coogee, Sydney.

Follow the branches, most certainly blooming with the waratahs that inspired some of Jackson’s most striking dresses, housed in the Powerhouse Museum, to Designers of the Year Anna Plunkett and Luke Sales from Romance Was Born. Jackson’s work with Jenny Kee from the seminal Sydney store of the late seventies and eighties Flamingo Park, was the launching point for the Paris debut of Romance Was Born in 2018. 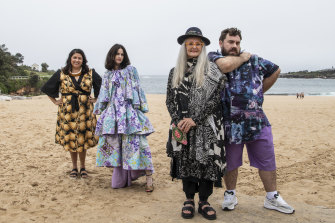 The final bloom is Grace Lillian Lee, the inaugural recipient of the Carla Zampatti Award for Excellence in Leadership. The Cairns-based indigenous artist, designer and founder of First Nations Fashion + Design, which made its runway debut at Afterpay Australian Fashion Week in June. “I know Grace’s work. Her collaborator Teagan’s mother Sarina Jan invited me to NAIDOC Fashion Week back in 1989. In the early days,” Jackson said. “It’s about coming full circle. To see the young ones coming up is overwhelming.”

While the Melbourne-born Jackson has blazed a singular trail for decades, working in Paris, Papua New Guinea and Arnhem Land, this is a rare moment of acknowledgement without Kee beside her on the podium. This time Kee, who was made Fashion Laureate in 2013, stood proudly to the side having presented the award.

“It’s amazing that some things happen all together like this. Look at the future here today. It means something to see Luke, Anna and Grace win,” Jackson said. 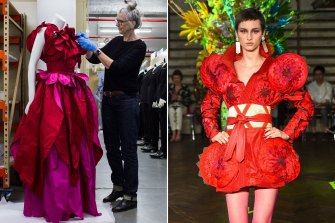 Seeds of creativity: A Linda Jackson Waratah dress from 1984 at the Powerhouse Museum with curator Glynis Johns and Romance Was Born’s Waratah trench on the Paris runway in 2018.Credit:Dominic Lorrimer, supplied

Founded in 2005 Romance Was Born’s unbridled creativity has attracted fans in Cate Blanchett and pieces from a collaboration with Jackson found their way into the 2019 Met Gala exhibition Camp: Notes on Fashion. Sales and Plunkett found their “fashion fairy godmothers” Jackson and Kee on the dance floor at Vogue Australia’s 50th anniversary celebrations at Fox Studios as Akira Isogawa whirled like a dervish nearby.

“Knowing that Jenny had one and seeing Linda finally win was so moving,” Sales said.
“She has always been the quiet one who does her thing and Jenny is more out there,” Plunkett added. “So to see her present the award to Linda was incredibly powerful. It’s the legacy. Linda should have got it a long time ago.”

Lee agrees that Jackson’s win, along with the introduction of an Indigenous Designer Award is overdue. 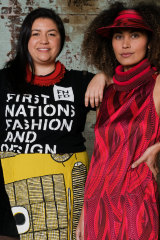 “She’s been a supporter of ours for a long, long time,” Lee said. “Again, it’s about time. More of the industry needs to be working with First Nations people because what I’m fearful of is that it’s just a trend. Fashion could be the leader within all of this for us to grow and change the nation.”

This year awards were also received by Commas for Best Emerging Designer, Bassike for Sustainable Innovation of the Year and Julie Shaw from MAARA Collective for the inaugural Indigenous Designer of the Year prize. Byron Bay label Spell was voted as the People’s Choice Award winner.