Home » Fashion » Is this what power dressing looks like now? Tracee Ellis Ross in a pink taffeta two-piece? Rihanna in a tangerine stretch-velvet wiggle dress? Lizzo in lime-green feathers? Or maybe Michelle Obama in a custom iridescent cyan trouser suit? Christopher John Rogers refuses to play favourites – despite the fact that with clients as glamorous as these, none of his answers could be wrong. 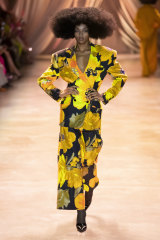 "I'm excited about all these women because they truly want to wear the clothes," the designer said last week, speaking on the phone a few days before his autumn/winter '20 collection – his third show – at New York Fashion Week. "And thank goodness for the power of social media. If it wasn't for that DM button, I don't know that all these things would have happened."

Thank goodness, for that matter, for the power of a show-stopping dress. They've become a calling card for Rogers and earned him a following among celebrities with a flair for dramatic dressing. And now, the designer is about to find a new audience for his strawberry-hipped taffeta skirts and feather-trimmed bustiers, thanks to a major order through Net-a-Porter.com's Vanguard initiative.

"I love that he is a new designer tackling statement evening wear," says Elizabeth von der Goltz, Net-a-Porter's global buying director. "It's really brave and refreshing when so many emerging designers are entering the market via minimalism and streetwear. I love the volume, the exuberance, the colour."

The signatures of a Christopher John Rogers look include old-school couture shapes injected with some totally 2020 oomph via sensational colour and attitude. The designer insists that all it takes to wear his designs in the real world is self-awareness – and a certain willingness to take up space.

"She needs to know who she is. I want her to be the most complete version of herself in that dress. And her most empowered, and her most self-assured. I want the clothes to feel like a hug."

Born and raised in Baton Rouge, Louisiana, Rogers credits an upbringing centred around community gatherings – Mardi Gras balls, church socials and high-school football games – with shaping his design sensibility. "Minimalism wasn't something I was obsessed with," he deadpans.

You couldn't really walk or take public transport to get around town, needing to drive instead, so "a certain level of pragmatism went out the window. If my friends wanted to wear vintage prom gowns and sneakers to the mall, we could do it. We could live out our fantasies through our clothes."

After studying fashion design at the Savannah College of Art and Design (SCAD) in Georgia, he moved to New York. Jonathan Saunders, another designer with a colourist's eye, hired Rogers to join his team at Diane von Furstenberg (Saunders was then the brand's chief creative officer). "I really learnt with him how to make clothes that are exciting and emotional, but also serve a customer's reality at the same time. Those things don't have to be mutually exclusive."

Developing his own brand meant that Rogers followed days at DVF with nights sewing one-off pieces in his bedroom. Everyone he worked with knew about his "project" through Instagram, but he never discussed his work in the studio. Once he left DVF, Saunders couldn't have been more supportive. "He said, 'You need to do this, I love what you're doing, we really need your voice in fashion.'"

The American fashion establishment ratified Saunders's sentiment in November last year when Rogers won the flagship prize at the Council of Fashion Designers of America/Vogue Fashion Fund.  He collected the award wearing a red silk robe originally created as a dress for someone else to wear to the event ("I was like, 'You know what? I'll just wear it myself. We spent a lot of money on making this thing, so it needs to be seen'"), along with coordinating feather boa, boiler suit and sunglasses.

During the judging process, Anna Wintour visited Rogers's Bushwick, Brooklyn apartment for a collection preview. "She hopped out of her car in her Manolo Blahnik shoes and Valentino dress, and came up my steps right past the trash can. She was completely normal, and incredibly sweet."

So far, the most exciting part of winning the award hasn't been any starry endorsement, but a quieter milestone: moving the brand out of that apartment and into its first proper studio.

His team – and Rogers constantly praises "my team" – has worked effectively for free for the past two years; now they're all full-time employees of CJR LLC. Rogers, as well as being the brand's namesake and driving creative force, is also its de facto head of human resources, "which is scary". He's sorting out insurance, making sure the factory has the correct shade of hot pink, and someone else is cutting the patterns.

"We're actually running a business now. It's not just a side hustle. It's never been just a fun thing; the intention was always for it to be what it is now, but we didn't have the resources."

They've been in the SoHo space for three days. "We just got real work tables, we've got rails, we've got a couch," he says. "Now we can actually do the work and then I can go home and sleep."

Although, judging by the rapturous response to his show, he shouldn't expect the fashion world to permit him a lie-in any time soon.

Related posts:
‘Dressing, is, lo, Power, This, What
World News