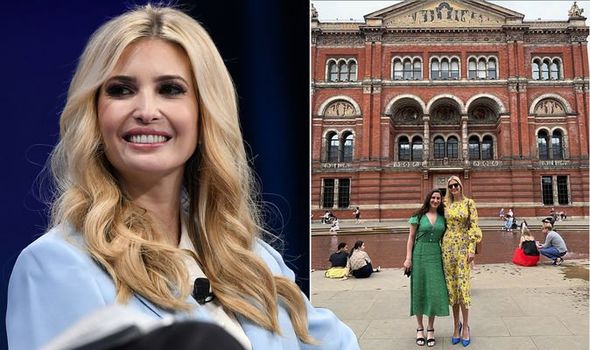 Ivanka Trump, 37, made her excitement at being in the UK clear in the image, as she beamed for the camera. The First Daughter captioned the image with the British flag, and tagged that she was standing outside the V&A museum, in South Kensington. Posing with a friend in green, Ivanka wore a vibrant yellow dress from Les Reveries, £590. She teamed this with a pair of bright blue court shoes.

The dress was fitted at the waist and came down past Ivanka’s knees.

Ivanka kept her eyes covered with a pair of dark sunglasses, and brown leather handbag could be seen swung over her shoulder.

Keeping things simple, Ivanka wore her hair straight down in a middle parting.

The mum-of-three clearly enjoyed her visit to the museum, posting various clips from inside to her Instastories. 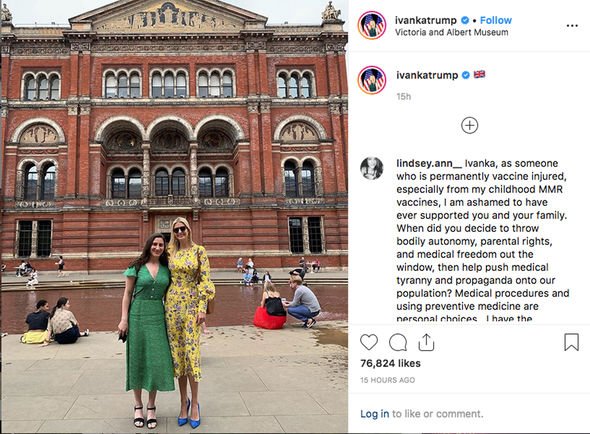 Ivanka will join Donald and Melania today to the meet senior members of the Royal Family, including the Queen.

The Trumps will be officially hosted at Buckingham Palace with a ceremonial welcome in the garden, inspecting the Guard of Honour, which is formed of Nijmegen Company Grenadier Guards.

It’s arranged for Royal Gun salutes to be fired in Green Park and at the Tower of London.

The Queen will also host a private lunch at Buckingham Palace, after which the Trumps will view a special exhibition in the Picture Gallery, showcasing items of historical significance to the United States from the Royal Collection.

Donald the the rest of the Trump contingent are in the UK until Wednesday evening, and they have a busy schedule ahead of them.

Melania and Donald were seen stepping on to their plane last night to make their way to the capital.

Making a signal at their impending trip, the First Lady opted for a London-themed dress. The garment is cream, and adorned with a green and orange pattern.

But, take a closer look and it’s clear that this dress makes a nod at the capital, having been emblazoned with prints of the Tower of London, the Houses of Parliament, Tower Bridge, and double-decker buses.

The dress itself had a blouse collar and quarter-length sleeves.

Ivanka is not, in fact, her real name. She actually shares her mother’s name Ivana.

Explaining why she is known as Ivanka in a 2010 tweet, she said: “In Czech, Ivanka is the baby name for Ivana, like Bobby is to Robert.”

Ivanka was well known to the American public before her father became President thanks to appearances on TV.

She made short cameos on Project Runway and Gossip Girl, as well as becoming a primary boardroom member on The Apprentice with Donald.

Ivanka was raised as a Presbyterian Christian, but converted to Judaism to allow her to marry Jared Kushner.

Ivanka studied with Elie Weinstock from the Modern Orthodox Ramaz School, on the Upper East Side of Manhattan in New York City.

She now keeps kosher and observes the Jewish Sabbath. Ivanka said in the February 2015 edition of Vogue: “We’re pretty observant… It’s been such a great life decision for me… I really find that with Judaism, it creates an amazing blueprint for family connectivity.

“From Friday to Saturday we don’t do anything but hang out with one another. We don’t make phone calls.”

Ivanka ran a fashion line for 11 years, only recently closing it down. She also had a fine jewellery store which closed in March 2017.

Ivanka now focuses on her role as an advisor to the President, Donald Trump.