Jameel Mohammed’s Cinderella moment arrived in the nick of time.

In 2018 the designer had achieved a modicum of success with his distinctive jewelry, which pays homage to the African diaspora. The fledgling line, called Khiry, had been picked up by Barneys New York, but Mr. Mohammed was not making enough to survive in New York City, or in the industry.

“I felt like I was pushing a boulder up a hill,” Mr. Mohammed, 26, said in a recent interview from his studio in Brooklyn.

So he was on a Greyhound bus — with a ticket supplied by his parents, and “knowing I had to get a job as a waiter when I got back to Chicago” — when he got an email. Michelle Obama’s stylist was interested in Khiry pieces for the former first lady to wear during her “Becoming” book tour.

“The pieces had a great balance of chic edge and femininity,” Meredith Koop, the stylist, wrote to explain why she bought the Isha Rose Quartz Hoops with a matching ring for Mrs. Obama. Ms. Koop said she had been struck by Mr. Mohammed’s “immense creativity and character.” 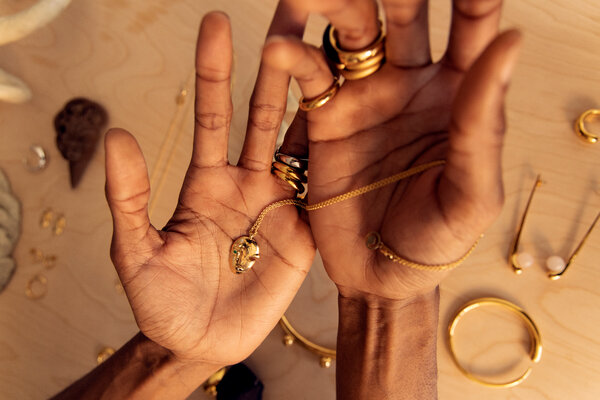 She was not alone. The poet Amanda Gorman wore Khiry when she appeared on the February cover of Time magazine, as did Serena Williams for the December 2018 cover of Teen Vogue. Issa Rae, Alicia Keys, Megan Thee Stallion and Cardi B have worn pieces from Mr. Mohammed’s two demi-fine collections, and he designed Garcelle Beauvais’s royal jewels in the recent Eddie Murphy film “Coming 2 America,” too.

The success “feels pretty incredible, incredibly positive,” Mr. Mohammed said. “A lot of things that I dreamt of and envisioned for a long time are taking place. Now I have a studio space I can go to and sing and dance and make art, and I’m interfacing with amazing people giving great advice.”

“I have never seen or heard the jewelry story Jameel is trying to tell and show the world,” Mr. Harris said. “A story of the African diaspora in this super luxe, refined, artistic and modern way. So I know there is a place for him in this industry. A blank space to fill, I like to say.”

Mr. Mohammed said he knew from the start of his jewelry label in 2016 “that, without a ton of resources and deep pockets, I would need something specific to say.” He added: “In the process of developing the collection I tried to reflect on different themes. I watched documentaries on American, African and Caribbean history.”

What the world needed, he said he concluded, was “a luxury brand based on inspiration of what the future can and should look like.”

Mr. Mohammed’s trajectory has been all about getting ready for a future in fashion. “When I was in the eighth grade, I started a custom sneakers business, painting sneakers,” he said. Then connections he made with fellow students and alumni at Phillips Exeter Academy and during his political science studies at the University of Pennsylvania led to internships at Nicole Miller and Narciso Rodriguez, where he said he gained “an understanding of the workings of the business of fashion: how trends are marketed, how product is developed.”

Khiry pieces immediately reveal their African inspiration. The motif of his Mask Pendant, worn as an earring in Ms. Gorman’s cover photograph, reflects “Brancusi’s recognized modernity within the context of West African design principles that preceded it,” Mr. Mohammed wrote in an email.

And his Khartoum pieces, he wrote, were “inspired by the shapes of big horned cattle kept as a store of wealth in Sudan. Both designs insist subtly that Black creativity and ultimately life be regarded on their own terms, and understood more broadly as central to what we regard as beautiful and worthwhile today, as much as in the future.”

“The next collection is called Fights, Flights and Fantasies,” Mr. Mohammed said. “I’m thinking about the different responses that we have to trauma, especially the ones that I see happening in day-to-day life and in history.” He said he hopes to unveil the collection in the fall or sooner, “maybe in August in commemoration of Nat Turner,” who led a slave rebellion in Virginia in August 1831.

Along with the new collection, another Cinderella moment has been unfolding for Mr. Mohammed. He is one of 10 finalists for the 2021 CFDA/Vogue Fashion Fund Award; this year, all the finalists will receive funding and mentoring from industry leaders.

“I’ve been planning to apply for this program since I was a junior in high school, with the knowledge that it has shaped the careers of some of American fashion’s most highly regarded designers and fashion businesses,” Mr. Mohammed wrote in an email on April 27, the day the finalists were announced. “I think both the mentoring and funding in concert will be major to unlock and reach some of our goals, establishing key partnerships and scaling our audience to reach more people.”

The award sounds tailor-made for Mr. Mohammed and his ambitions. After all, Khiry, his middle name, means “wealth and fortune” in Swahili.