Katy Perry put her post-baby body on display in behind-the-scenes pics from the set of the April 5 episode of ‘American Idol.’

Who else could make a bathroom look this good!? Katy Perry turned the bathroom stall into her very own photo shoot set in new behind-the-scenes pics from the set of American Idol. She took to Instagram to show a full length look at her ensemble from the show’s April 5 episode, and posed in the set’s bathroom in the photos. Katy looked amazing in her plunging leather dress, which featured a belt across her midsection.

The April 5 episode of Idol was pre-taped, so it’s unclear exactly when these photos were taken. However, season 19 of the show didn’t start taping until after Katy gave birth in Aug. 2020, so the pics are definitely of her post-baby. Katy wasted no time getting back to work after she had her little girl, Daisy Dove, and was first photographed on the Idol set just six weeks after she welcomed her daughter.

This is Katy’s fourth season as a judge on Idol alongside Luke Bryan and Lionel Richie. The April 5 show featured contestants from the top 24 performing duets with celebrity guests, including Tori Kelly, Jason Aldean and more. Viewers will have a chance to vote their favorites into the top 16. 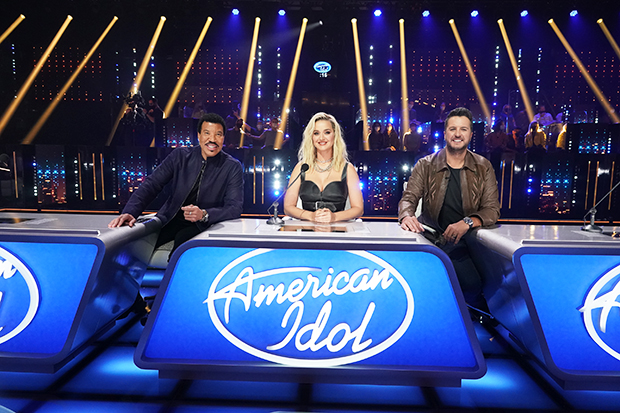 Later this month, American Idol will turn from pre-taped episodes to live shows, so Katy will be back on-set with her fellow judges. Until then, though, she’ll be embracing time with her fiance, Orlando Bloom, and their baby. In March, the trio took a family trip to Hawaii, and looked relaxed as they hit the beach, went for walks and more. On Easter Sunday, the couple also took Daisy to the beach in Santa Barbara for another fun outing.

Katy and Orlando have been engaged since Valentine’s Day 2019, but had to push back their wedding amidst the coronavirus pandemic in 2020. Their new plans to tie the knot have not been revealed. This will be the second marriage for both stars, as Katy was previously married to Russell Brand and Orlando was with Miranda Kerr, who he shares a son with.