Home » Moore From L.A.: The Fashion Vibe Was Old Hollywood, But the 2021 Oscars Were Anything But

Moore From L.A.: The Fashion Vibe Was Old Hollywood, But the 2021 Oscars Were Anything But

They turned a train station into a runway for the 2021 Oscars, with “One Night in Miami” director Regina King leading the return-to-glamour charge at the top of the show wearing a Cinderella blue Louis Vuitton gown.

This year’s Oscars fashion vibe was Old Hollywood with couture and millions of dollars worth of diamonds, even as the evening was anything but business as usual. It was about the new face of Hollywood, with the most diverse group of nominees in history and a slate of socially activist films tackling racism, the immigrant experience, representation of the deaf community and more.

“If things had gone differently in Minneapolis this week, I may have traded in my heels for my marching boots,” King said in her opening, nodding to former Minneapolis officer Derek Chauvin being found guilty for the murder of George Floyd last May and the heavy moment in history.

Her custom look was pure fairy-tale fantasy, however, designed to lift the spirits in the grand Hollywood tradition. Created by stylists Wayman Bannerman and Micah McDonald with Vuitton designer Nicolas Ghesquière, the pale blue duchess satin gown with scalloped hem had a dramatic shoulder detail and sparkled with 62,000 sequins and more than 8,000 stones.

It was the first time I can remember seeing stylists interviewed on E’s red carpet show, including Bannerman and McDonald, who talked about all the blue fabric swatches they went through for the look.

The 2021 Oscars: See All the Red Carpet Fashion Looks

No wonder, because in the absence of physical red carpets for most of this awards season, stylists have filled the fashion void with behind-the-scenes photo shoots for social media that have had editorial-level polish and substantial influence. A photo shoot by Wayman and Micah of King’s electric blue Schiaparelli look for the Emmys in August was the impetus for Forevermark contacting her for the Golden Globes. And indeed, she wore Forevermark jewelry again Sunday night.

In addition to fairy tale, the golden goddess was another of the evening’s Hollywood fashion archetypes, seen on Carey Mulligan’s modern marvel of a midriff Valentino Couture gown in copper allover embroidered with iridescent sequins and a mega volume skirt, Leslie Odom Jr.’s stage-ready gold Brioni tuxedo, and Andra Day’s metal mesh cutaway Vera Wang gown with side train, another midriff-barer that made her resemble an Oscars statuette.

(Midriffs and turtlenecks, bare and covered-up, were the two biggest trends of the night, which makes sense for the topsy-turvy times, I guess.) 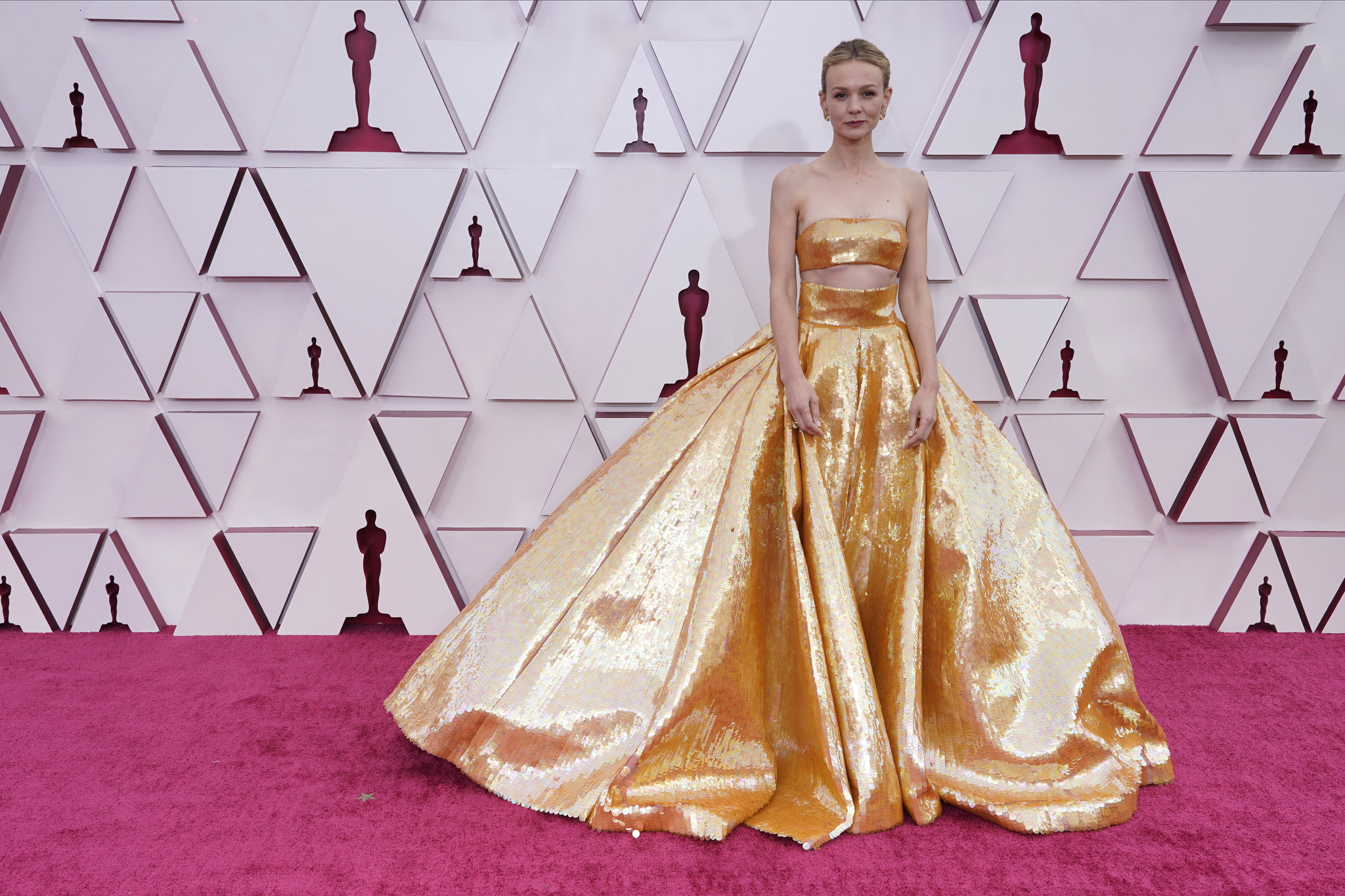 When it came to bright white, nobody did it better than Viola Davis, wearing a custom, intricately embroidered thistle motif bodice gown by Alexander McQueen’s Sarah Burton. At Davis’ side, husband Julius Tennon wore a matching white McQueen tuxedo, in a cute coordinating couple moment.

But it was the men who really brought the fashion heat when it came to more edgy looks, as they have been all of this mostly virtual awards season.

Lakeith Stanfield wasn’t even in Los Angeles to walk the red carpet on Sunday night, but he won the men’s Oscars fashion race with a custom jumpsuit with wide white spread collar by Anthony Vaccarello for Saint Laurent that was as suave as his character in “Judas and the Black Messiah.”

“I felt like it was the perfect way to be representative of the event and his playfulness but respectful of this difficult time,” said his stylist Julie Ragolia, noting that the suit was made of sustainable materials.

Because Stanfield was filming in London, Ragolia organized a behind-the-scenes shoot for him with photographer Campbell Addy, and the images were circulated on social media, where users swooned. 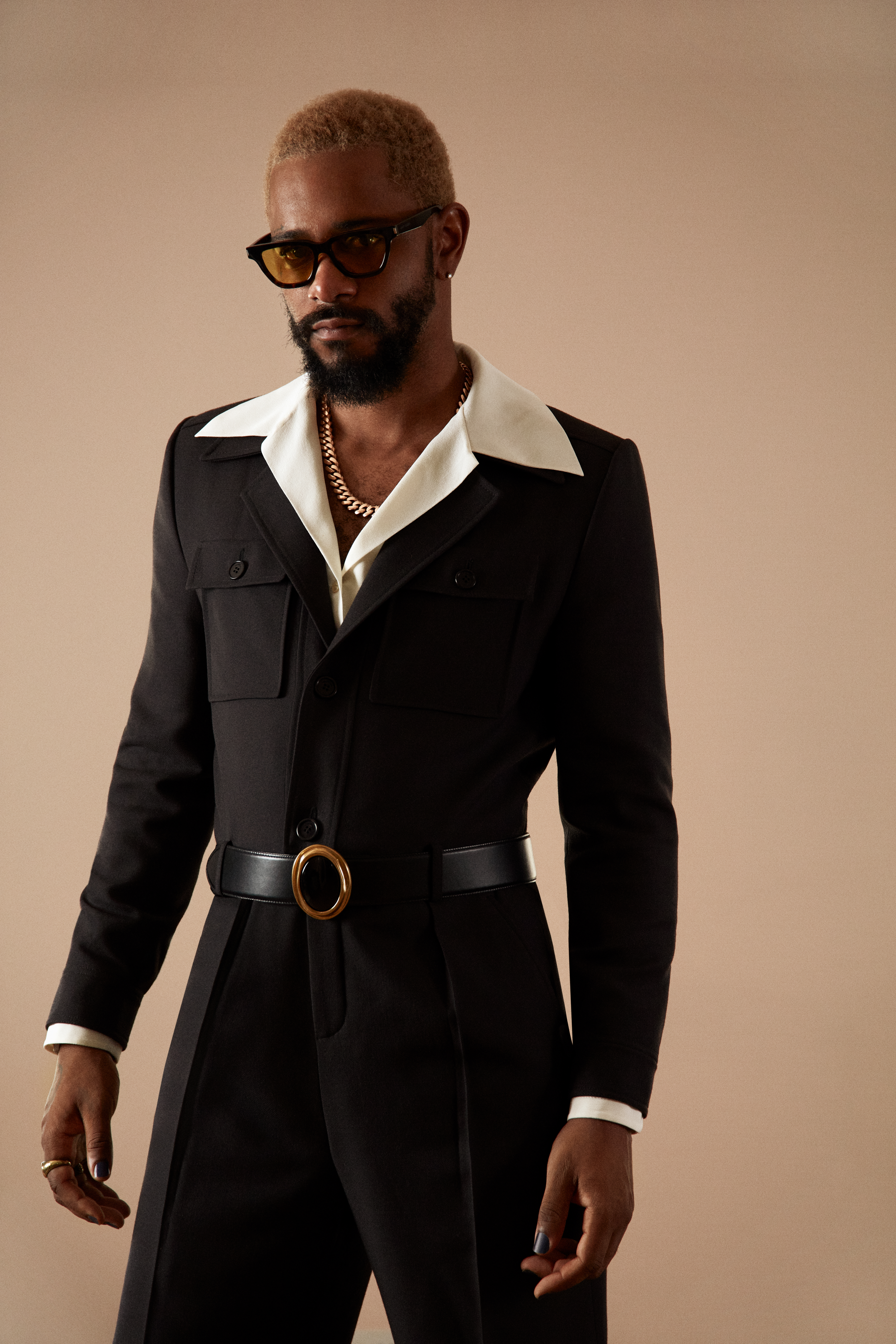 Ragolia also styled “Sound of Metal” star Riz Ahmed, who wore a mock turtleneck and wide cummerbund look from Raf Simons’ Prada that was the perfect quarantine casual easing into a tux.

“We have been so colorful all awards season with Riz and wanted to take a different approach, respecting the formality of the occasion, and also being a little subversive and irreverent,” Ragolia said. Mission accomplished. I also loved that “Nomadland” winning director Chloé Zhao stayed true to herself, wearing sneakers and braids with her Hermès dress, natch.

During his speech to accept the best supporting actor award for “Judas and the Black Messiah,” Kaluuya, like so many others, struggled to make sense of the moment and an evening full of so many contradicting emotions.

He told the audience “there’s so much work to do,” when it comes to racial justice, but “I’m so happy to be alive and I’m going to celebrate that tonight.” That’s all anyone could do. 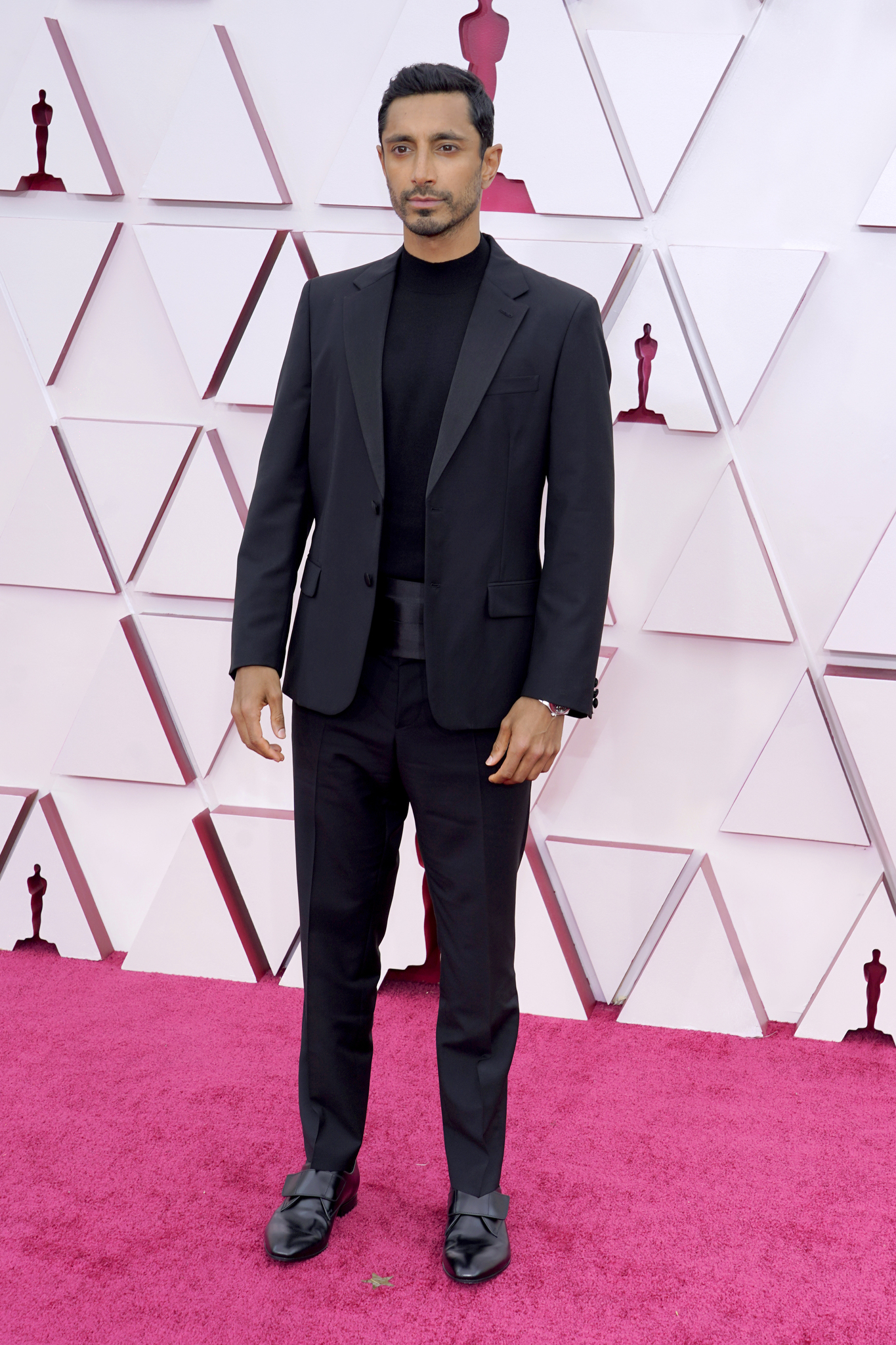