STACEY Adams was delighted when she rekindled her relationship with her teen boyfriend – who treated her like the perfect gent.

But the 29-year-old, from Workington, Cumbria, was horrified when Krys Ritson savagely beat her – leaving her with a broken eye socket and six broken ribs. 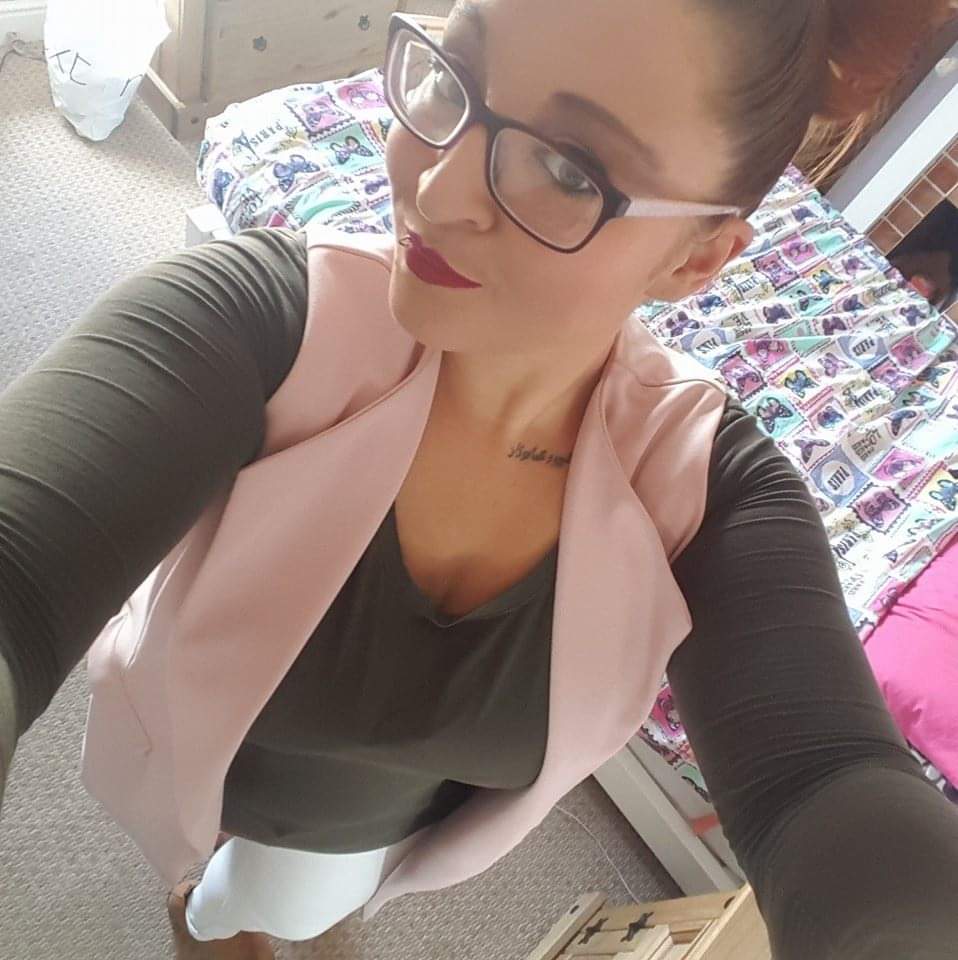 After being arrested, Krys was adamant he had attacked his ex-girlfriend, not Stacey, and could not believe the truth until he was presented with pictures of her injuries.

Krys Ritson and I were childhood sweethearts, we first started dating when I was 14 and he 17.

He was gorgeous, had a great sense of humour and, though we were young, there was an undeniable spark between us. 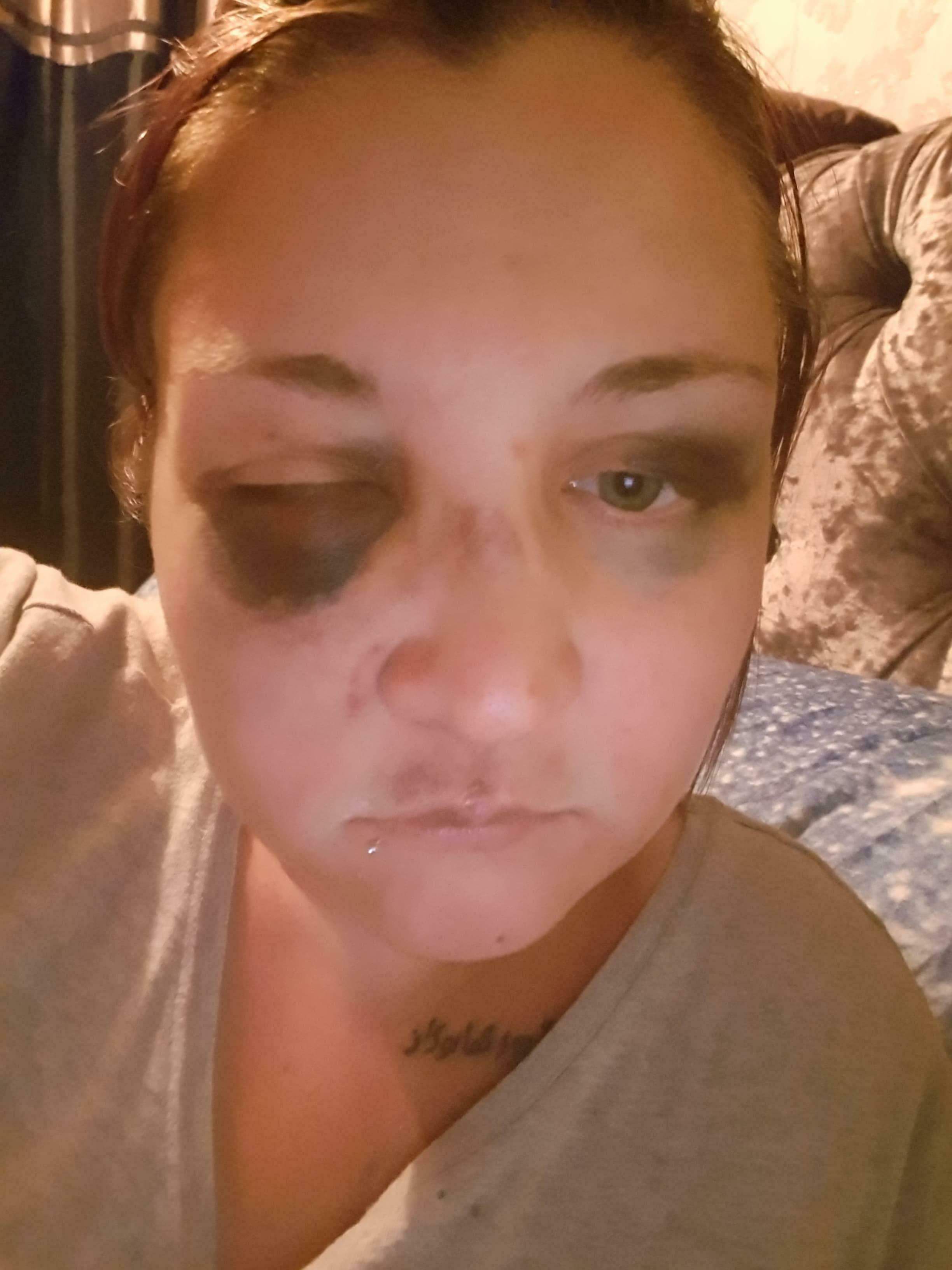 We quickly became an item and spent four amazing months together, before Krys had moved away from the village where we grew up.

I was heartbroken when he left. Then, 12 years later, he reached out on Facebook in January 2018. I'd moved too, so we were living nearby again.

"Hello beautiful, how you keeping?" he asked. It was as though no time had passed, the conversation flowed between us.

Now he was older, he was even more of a charmer and made me feel comfortable enough to talk to him about anything.

I opened my eyes to see Krys looming over me, his fist clenched. He’d punched me in the nose and I was pretty sure it was broken

Three months later, I was on a night out with the girls and decided to message Krys after a few drinks. "Want to come and meet me?"

When he arrived, I went outside to see him. "It’s been so long," I said, hugging him.

"You look great," he said. I noticed he was shaking. "Are you nervous?" I asked.

"Yes, I’ve wanted you all my life Stacey," he said. "I can’t believe you wanted to meet me." 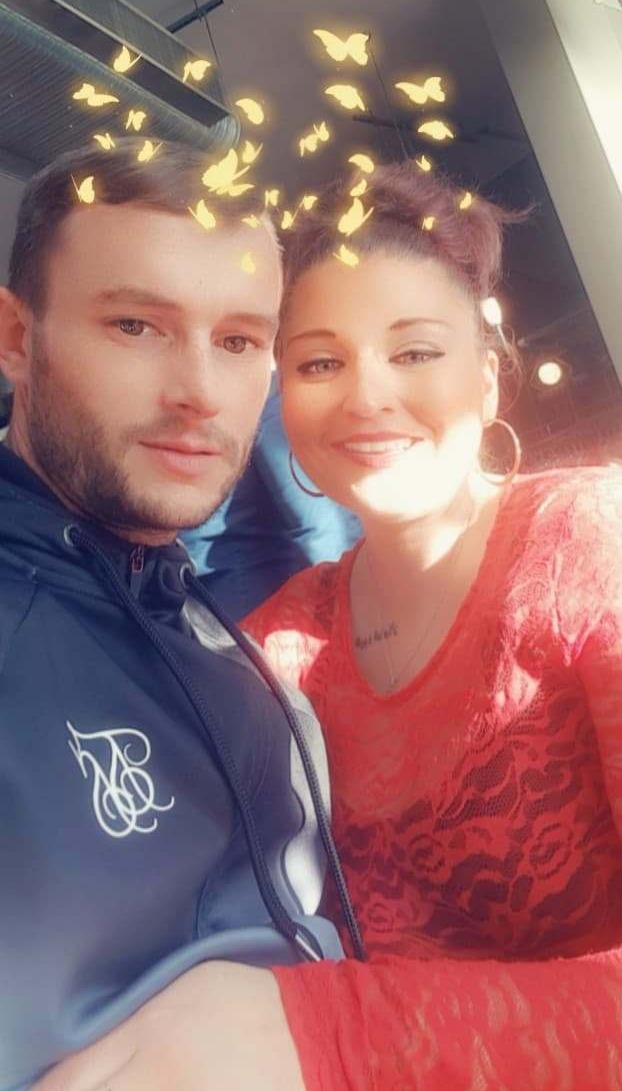 We chatted for a bit, then he came into the pub to meet my friends. He began to relax and soon his banter had all the girls laughing.

After that, we picked up exactly where we’d left off all those years ago. We started spending all our spare time together, going on long walks, bowling and enjoying evenings at the pub.

We made it official and Krys was the perfect boyfriend. We never argued or disagreed about anything.

One day, he sat on the end of my bed, took my hands in his and looked me in the eyes.

"I love you more than you will ever know, baby," he said.

It was such early days and though I didn’t say it out loud, I was falling for him too. Already I could picture us having a future together.

"I’m so glad we found each other after all these years," he'd tell me. "I feel like the luckiest man alive."

At hospital, I was examined and told I had a broken nose, fractured cheekbone and eye socket, and six broken ribs

Then Krys got some terrible news. Two of his friends had been killed in a car crash. I did my best to comfort him, but he wasn’t coping very well and started taking Valium to help him sleep.

My cheery, loving Krys disappeared and he became gloomy and low. I felt sorry for him and hoped he would get through this rough patch.

Two weeks later, on May 31 2018, Krys went on a rare night out with the lads. I left the door unlocked for him and climbed into bed.

But I woke with a searing pain rippling through my face. I opened my eyes to see Krys looming over me, his fist clenched. He’d punched me in the nose and I was pretty sure it was broken.

"What are you doing?" I screamed.

"What are you talking about?" I asked. "I am Stacey, Lisa is your ex." 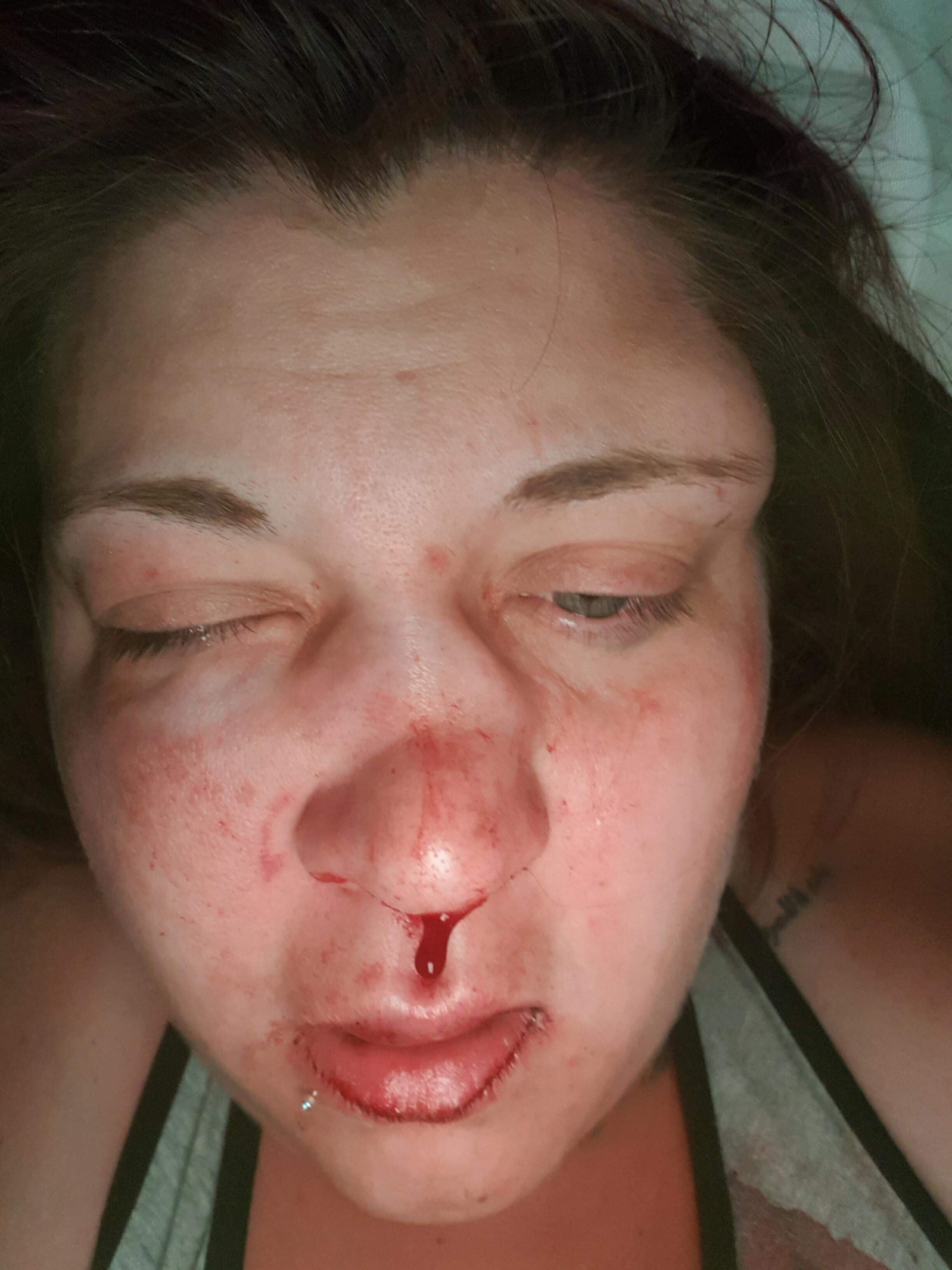 How can I find out if my partner has a history of violence?

Also known as Domestic Violence Closure Scheme, Clare's Law exists to provide information which could protect someone from being a victim of an attack.

The scheme allows the police to disclose information, on request, about a partner's previous history of domestic violence or other violent acts.

If you have concerns about your partner's background, you can apply for disclosure by going to the police.

You can visit your local station in person, call 101 or speak to an officer on the street.

Once you've made contact, the police may invite you in for a chat to put in the application.

Dazed and very confused, I put a hand to my nose and felt warm blood trickle over my hand. As I tried to get up, Krys clambered on top of me. But I managed to knee him in the groin and push him off.

Stumbling out of the bedroom, I gaped at my boyfriend and wondered where my perfect man had gone. In his place was a monster. His eyes looked black, as though he were possessed.

Before I could escape, he grabbed me and thrust me hard against the upstairs bannister. As he did, I hit my head and felt a crack in my chest.

He was still yelling and calling me Lisa as I collapsed to the floor in a heap and curled up in a ball to try and protect myself. 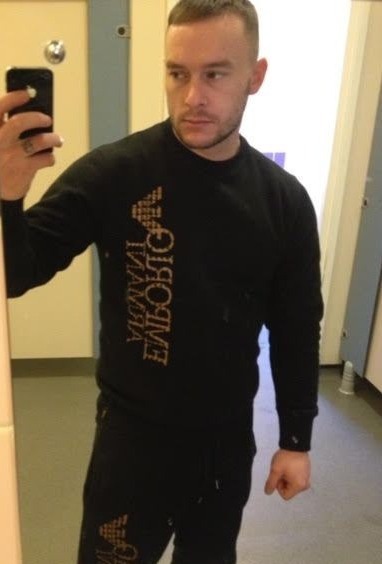 Then Krys went to lie on the bed, so I took my chance to crawl into another bedroom and escape. What felt like a lifetime later, I heard a thudding on the front door.

"Open up, it’s the police," a voice called. Relief flooded through me but I daren’t move.

I heard the police kick the door down before rushing inside. I was saved.

The police said he was adamant it was his ex he'd attacked, not me. It was only when they showed him photos of me and my injuries that he accepted the truth

The police took one look at me and called for an ambulance. They explained a neighbour had heard our shouting and called 999.

I saw Krys being handcuffed and taken away by police. As I was taken to hospital, I couldn't get my head around how and why he had flipped. He'd never so much as raised his voice before.

At hospital, I was examined and told I had a broken nose, fractured cheekbone and eye socket, and six broken ribs.

I was booked in for surgery to fix my face and sent home to rest. 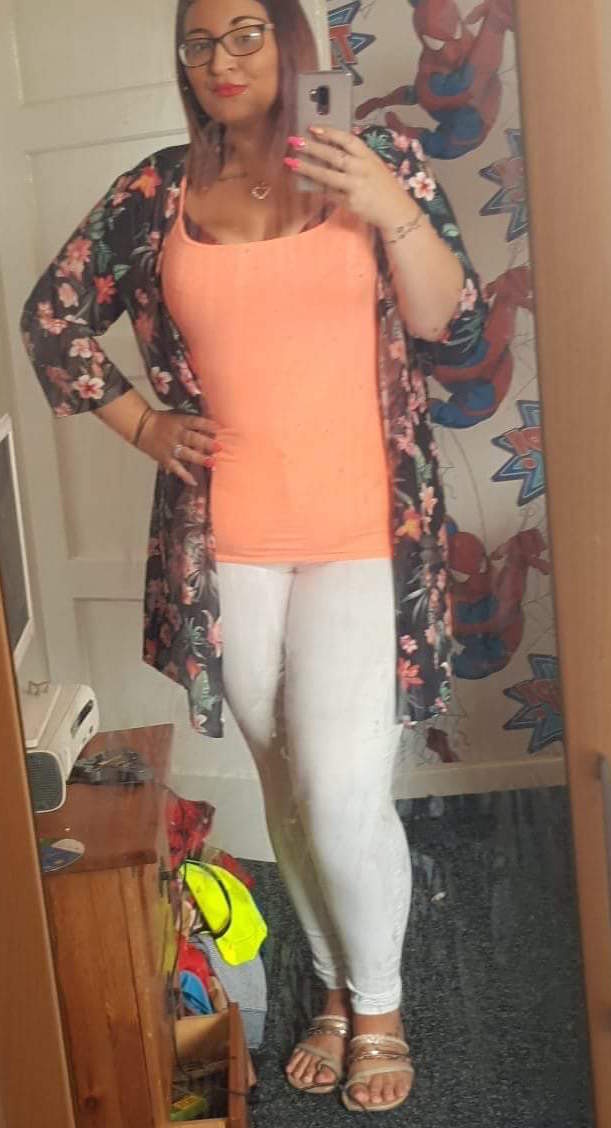 Later, the police came to speak to me again and dropped a bombshell. Krys had a record for domestic violence on previous partners.

I was stunned. I’d never thought of him as anything other than a complete softie.

The police also said he was adamant it was his ex Lisa he'd attacked, not me. It was only when they showed him photos of me and my injuries that he accepted the truth.

None of it made sense. I just wanted my old boyfriend back, the one who made me feel like a million dollars.

In July 2018, Krys Ritson, then 30, of Fell Vue Avenue, Whitehaven, appeared at Carlisle Crown Court and admitted causing me grievous bodily harm, as well as damaging another former partner's phone and fraudulently using her bank card.

The court heard his offending was fuelled by drug abuse and he had an “appalling” criminal record, particularly for violence, and that a number of these offences were committed in a domestic context.

WHERE CAN I GET HELP?

You don't have to suffer in silence.

If you are experiencing domestic violence or someone you know is there are groups that can help.

He was sentenced to 15 months in prison. I knew he was where he belonged, but I couldn’t help feeling heartbroken.

Even now, I can't believe what he did. He has left me a shell of my former self and I find it hard to trust anyone.

I wish I'd known about Clare's Law at the time – if I’d known he had a history of violence, I would never have accepted his friend request on Facebook.

I have since used it on my new partner who thankfully has nothing to hide. I don’t believe Krys will ever change so I want to warn other women to avoid him.

Believe me when I say he won’t be your dream man, but your worst nightmare.

*Lisa's name has been changed.