There are two main schools of thought about sneakers. They're either the peak fashion statement of the 21st century, epitomising more casual, democratic streetwear, or they're yet another example of a breathless fashion industry relentlessly releasing one overpriced, over-hyped product after another. 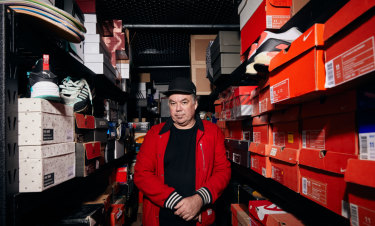 Simon Wood, the 48-year-old founder of the world's first international sneaker magazine, Sneaker Freaker, belongs firmly in the first group. "Sneakers are the exclamation point on your outfit; that's why they say so much about you," says Wood, a father of three who runs his online and print operation from Melbourne. Wood has loved sneakers since he was a teenager, but was hooked while working in advertising in London in the late 1990s and window shopping through Soho's sneaker stores. Back in Australia, the retail equivalent was pretty much limited to Foot Locker and the like.

When Wood published the first print edition of Sneaker Freaker in 2002, he didn't imagine it would spawn a business employing 30 people, have him trotting across the globe visiting suppliers and attending international launches, and end up with more than 2 million likes on Facebook and 880,000 Instagram followers.

"My motivation was simple," he writes in the preface to The Ultimate Sneaker Book, his near-700-page encyclopaedia of sneakers, published last year. "I wanted Nike and Adidas to send me free shoes. Loads of free shoes, enough to fill a FedEx truck. And I wanted that truck to come back every month with more boxes to add to my stash."

Wood insists there's enough "honest grit" in Sneaker Freaker not to be swallowed alive by "brand-influenced hyperbole", but the success of the business is undoubtedly due to its unbridled love of modern sports shoes, and a booming worldwide market. Nike alone has more than 1000 brand stores worldwide.

Not everyone can get away with wearing flashy sport shoes, however. Instagram account PreachersNSneakers (147,000 followers) calls out priests and clergy who don look-at-me expensive runners at the pulpit or on stage. "The Lord works in mysterious colourways," quips the account.

To read more from Good Weekend magazine, visit our page at The Sydney Morning Herald, The Age and Brisbane Times.