Home » Fashion » Seminal Moment: Vuitton’s 1996 Monogram Project Was the Mother of All Collaborations

Seminal Moment: Vuitton’s 1996 Monogram Project Was the Mother of All Collaborations

Leather goods were not at the center of the luxury universe back in 1996. In fact, fashion purists often would complain loudly if designers deigned to put handbags on the runway.

Collaborations of that ilk and that scale were practically unheard of, and the project laid the groundwork for Vuitton’s ultimate foray into fashion, and for leather goods to become the focal point for Europe’s heritage brands.

“It’s really this designer collaboration that put Vuitton on the map, and contributed to putting handbags on the map, too,” said Michael Burke, now chairman and chief executive officer at Louis Vuitton, the powerhouse flagship brand of LVMH Moët Hennessy Louis Vuitton.

Burke sported a “Magnum P.I.”-worthy mustache back in 1996, and was head of Vuitton’s U.S. operations when the vast project unfurled at the top of the year with glitzy parties in Paris, New York, London, Munich, Madrid, Rome, Hong Kong and Tokyo — all Instagram-worthy 14 years before the photo sharing app.

While collaborations are a dime a dozen today, Vuitton’s was unexpected and unorthodox — designed to propel its global profile.

While Vuitton is an undisputed luxury giant today, it was a much smaller business in the 1990s, with revenues slightly south of a billion euros, according to market sources. It was known mostly for small leather goods, especially wallets, and reliant on a traveling Japanese clientele.

To be sure, its renown in elite fashion circles was faint.

“There was no editorial on Vuitton. We didn’t even have a place to invite editors to come to see the collections,” Burke recalled in an interview. “If somebody wanted to see a product, I would take them back to the stockroom at our offices on 59th Street opposite Bloomingdale’s.

“I never met one journalist speaking highly about Louis Vuitton,” echoed Jean-Marc Loubier, who was executive vice president at Vuitton in the ’90s and helped spearhead the monogram centenary with then-CEO Yves Carcelle. 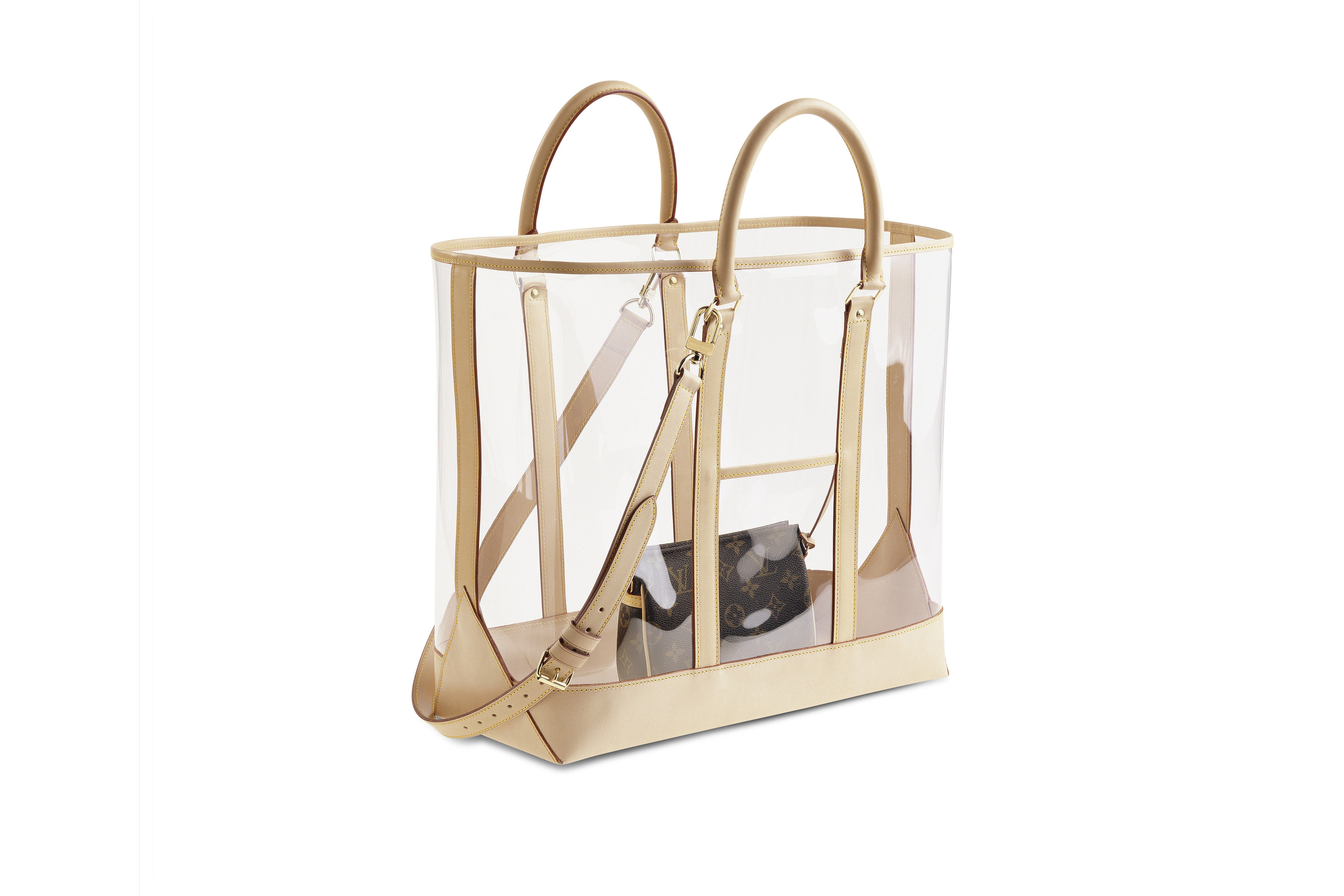 In Loubier’s view, “the monogram is the founding act of modern luxury” and Vuitton’s 1996 collaborations were a unique rejuvenation scheme hinged on handbags, whereas Gucci’s turnaround act was thanks to Tom Ford’s sassy and sexy ready-to-wear.

Burke said the seven designers Vuitton chose, from German, English, French, Italian and Spanish speaking parts of the world, were given “truly free rein” — and no marketing imperative. “The brief was very, very simple: You can do anything you want, as long as you use the monogram,” he said, “and we gave them all the means to do it.”

“The other thing that was striking is that there were so many at the same time,” he continued. “It was also unusual that in a way we were competitors. These were other luxury brand designers. It was very inclusive of competitors, which was daring. It showed a certain generosity and grounded-ness.”

Loubier said none of the guest designers asked for money. “They were all happy to do it because it was never done before, and they had a lot of esteem for Vuitton,” he recalled.

Not that all the interpretations of the monogram came easily, or quickly. Mizrahi conceived a see-through beach tote, compelling Vuitton to develop an acrylic that resisted sand, stains and wouldn’t yellow in the sun. (The brand also insisted he added some monogram – hence the attached wallet.)

Loubier described more than two years of legwork, and as many as 15 meetings with Alaïa, notorious for making collections erratically on his own timetable, without yielding a single sketch or concept.

Nearing the deadline to have prototypes put into production — Vuitton made between 50 and 2,000 of the limited-edition designs — Loubier toted a new Vuitton bag called the Alma and plopped it on Alaïa’s fabric-strewn design table, hoping it might inspire him. Spontaneously, the couturier grabbed a swath of leopard-print fabric and knotted it around the bag, like a headscarf to a chin. Voilà — one of the most successful designs of the project.

Delphine Arnault, now second-in-command at Louis Vuitton, scored one of the Alaïa bags, and said she always gets asked about the collector’s item whenever she carries it.

In its coverage in 1996, WWD was a bit circumspect: “The pairing of the established 142-year-old Vuitton with these particular designers might seem odd, but the items the designers came up with combine their wit and style with Vuitton’s penchant for quality and history for creating clever carrying cases or travel pieces,” it said. 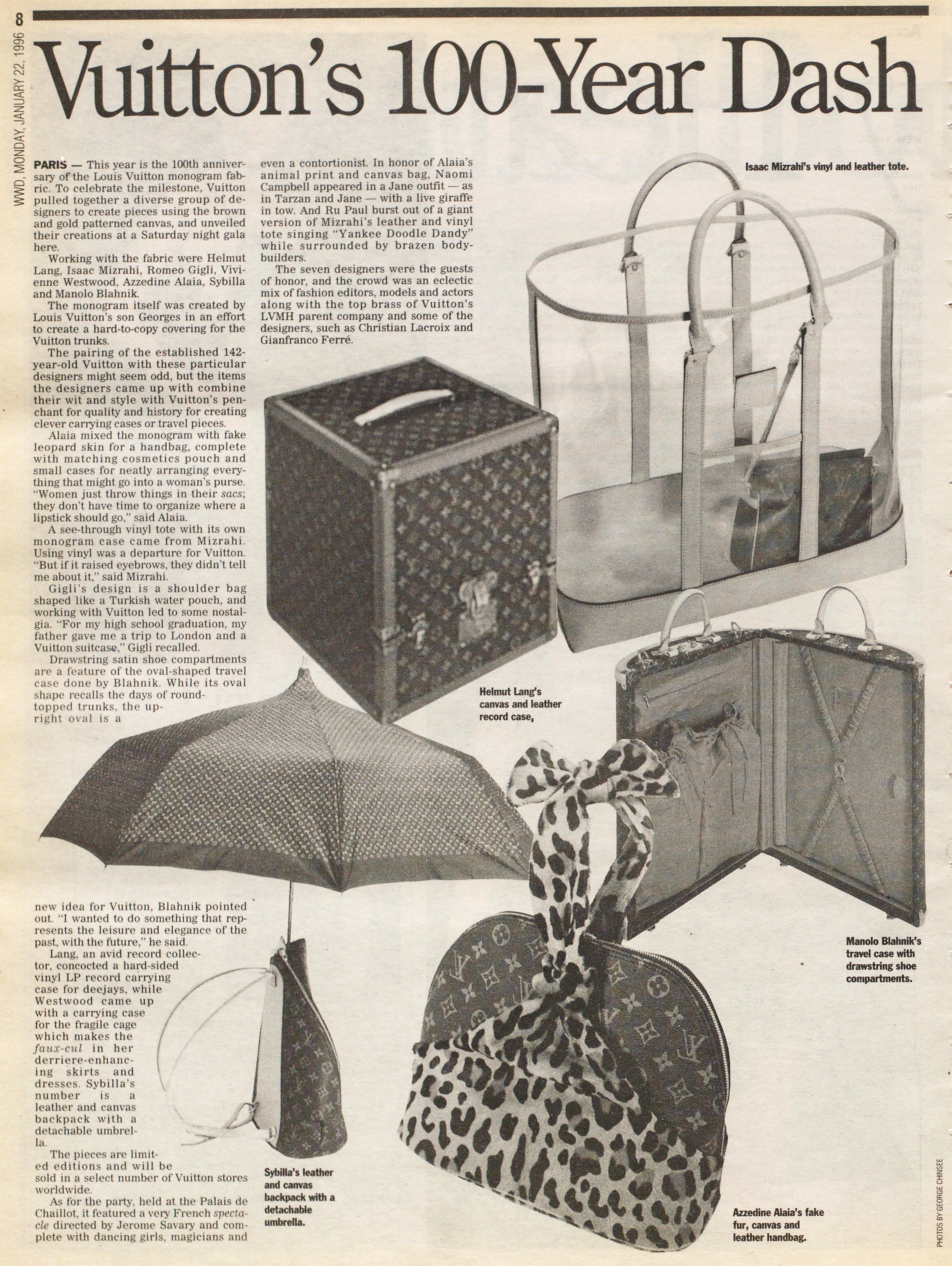 WWD’s coverage of the Vuitton collaborations in 1996.

Lang, an avid record collector, concocted a hard-sided record case for DJs, while Westwood came up with a fanny pack style which could be worn on the small of the back to evoke her derriere-enhancing skirts and dresses.

It was a point of pride for Vuitton that Vogue editor in chief Anna Wintour attended the monogram centenary event during couture week in Paris — her first attention paid to the French brand.

Another editorial breakthrough was getting six pages in high-brow French fashion magazine Égoïste, given that the title had never deigned to ever talk about handbags. Égoïste even commissioned Vuitton to create a coffin-shaped trunk for the shoot — a wry comment on a person’s last travel case, and a visual joke which almost got Loubier and others fired.

Yet it was proof that Vuitton suddenly landed on the radar of fashion’s most powerful arbiters and gatekeepers. It also foreshadowed the brand’s head-first dive into fashion by ultimately hiring Marc Jacobs as its first creative director and charging him with creating rtw.

“We had been cogitating about engaging with fashion one way or the other. And at that time, we weren’t sure yet that it was going to be with a designer,” Burke recalled. “This was a year before we brought in Marc.”

Its eight massive parties for the monogram collaboration, documented in a hardcover book, depict a headier time, and were an early example of event marketing that included elements of entertainment alongside displays of brand heritage. Among the most arresting images from the parties are Naomi Campbell walking a live giraffe across the stage at Palais de Chaillot, and Ru Paul, flanked by bodybuilders, belting out “Yankee Doodle Dandy.”

Most of parties were held in what Burke describe as “hoity-toity places” — except for New York City, for which Vuitton invited uptown ladies in their furs to stroll through the main floor and basement of a decrepit, graffiti-stained building in SoHo that would one day become The Mercer hotel. Performers included tap dancer extraordinaire Savion Glover and comedian Sandra Bernhardt with more topless strongmen trying to tear a Vuitton handbag apart. Did they succeed?

“Of course not,” Burke replied.

Vuitton winked to the centenary collaborations in 2014 by inviting six “Iconoclasts” — including Karl Lagerfeld, Rei Kawakubo, Frank Gehry and Cindy Sherman — to interpret the monogram as the brand marked its 160th anniversary.

“It’s part of the history of the house,” Delphine Arnault said about the 1996 effort. “A lot of people remember that project, it was really strong.”

Vuitton followed up the limited-edition collaborations in the second half of 1996 with a broader release of products with its other heritage canvas pattern, Damier, which did gangbusters at retail, according to Loubier.

In fact, he credits the landmark monogram project for a major coup two years later: Designing a Vuitton football for the 1998 World Cup, in which France prevailed. Vuitton compiled another book, photographing a staggering number of celebrities — from Shaquille O’Neal and Sylvester Stallone to Gywneth Paltrow and Maggie Cheung — holding the ball. The book was titled “Rebonds,” the French word for rebound.

Seminal Moments: When Fendi Conquered the Great Wall of China