A SIZE 20 care worker who gave up on relationships after ex-boyfriends told her to diet or be dumped has finally found love with a man half her size.

Brittany Jacques, 23, struggled with her self confidence after previous partners put pressure on her to lose weight from her 18st physique which had initially attracted them to her. 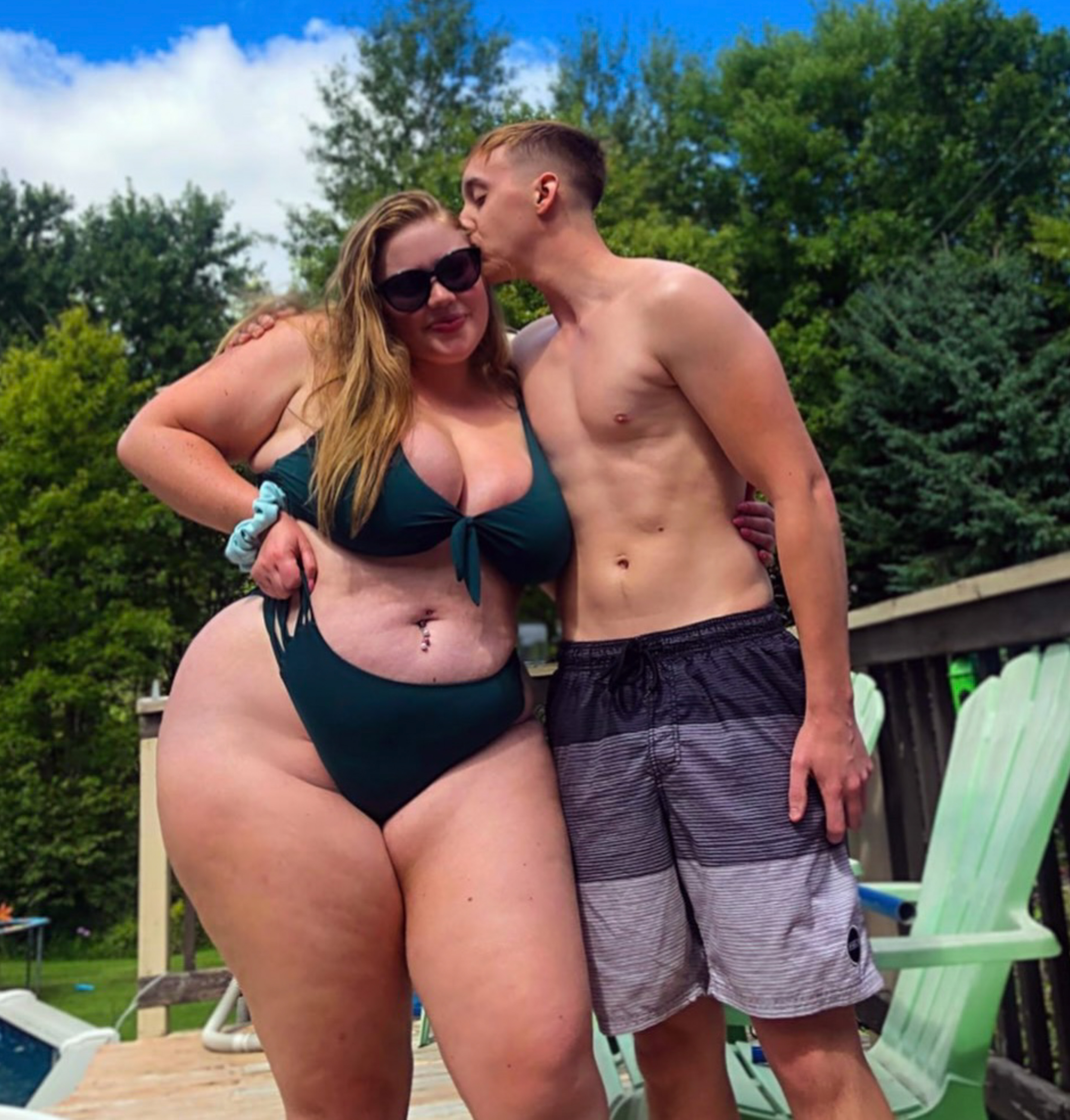 But after almost giving up, the singleton from Ontario, Canada, met personal trainer, Matt Montgomery, 23, on Facebook in August and hit it off straight away.

Brit said: “We had both almost given up on dating when we started talking.

“We hit it off right away from the moment we met. 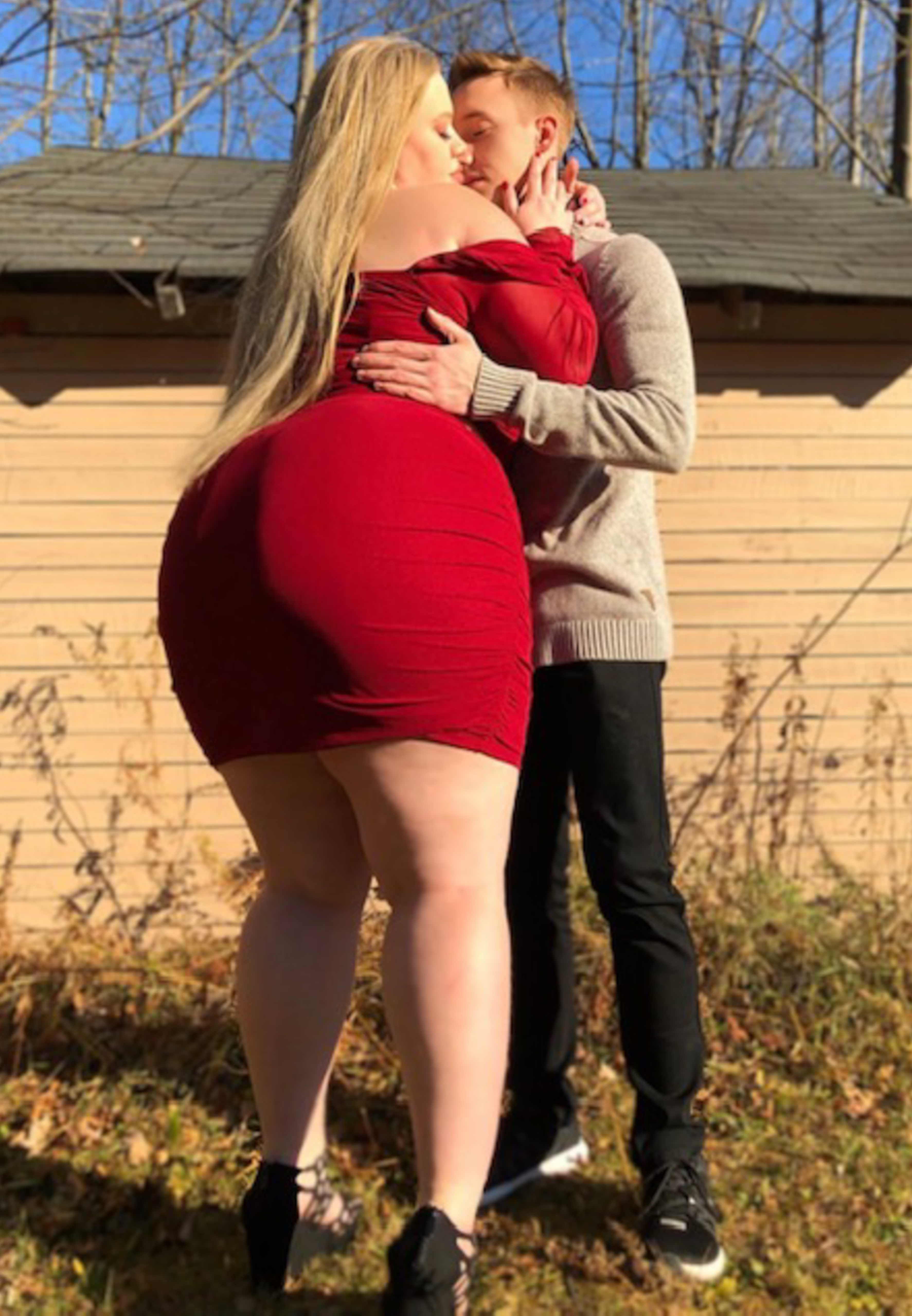 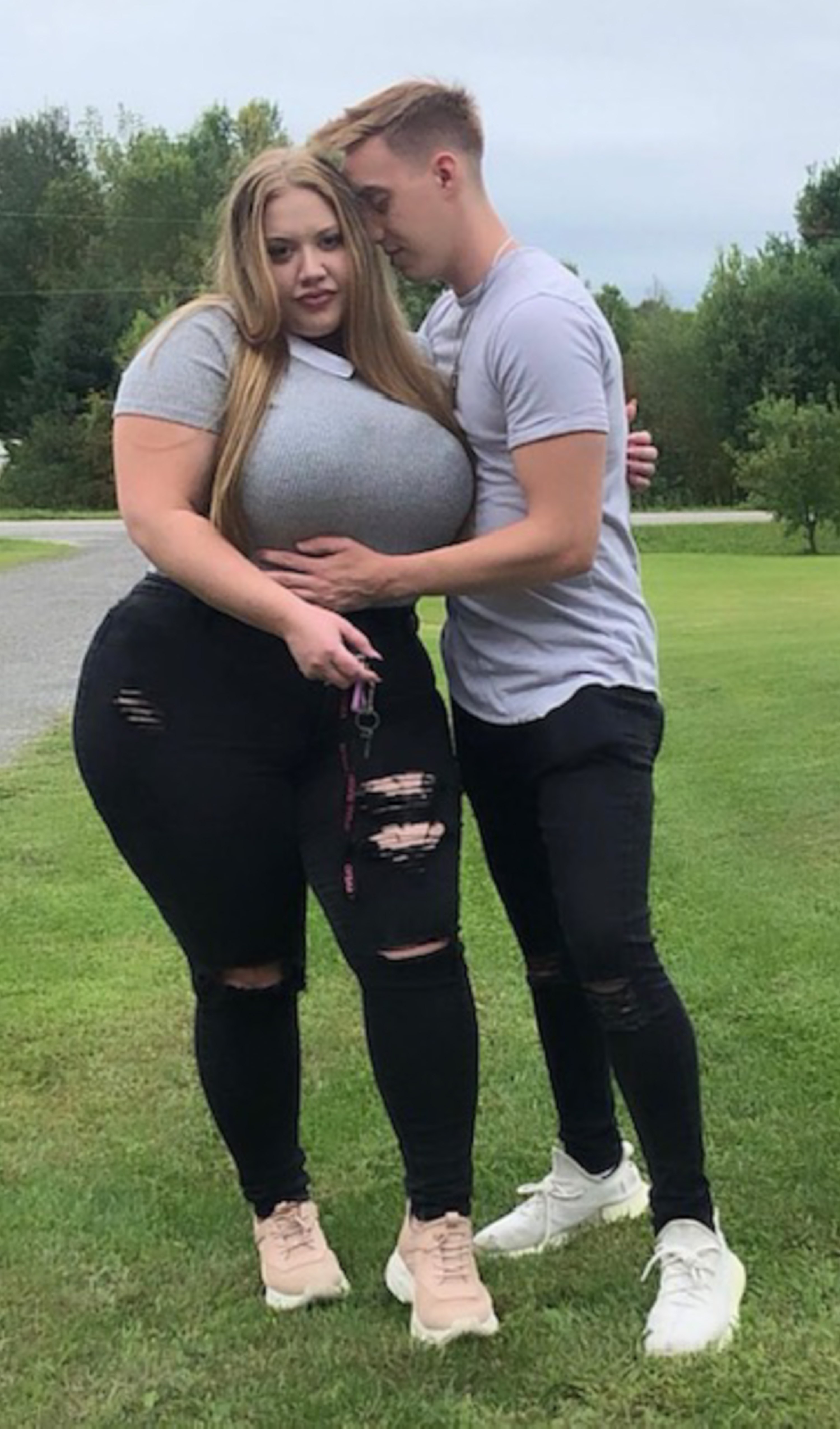 “I was a bit hesitant at first.

“I’ve been in relationships where guys have told me that they will dump me if I don’t start dieting or trying to lose weight.

“It did affect my self confidence and at one point I did start working out and trying to change my size.

“But then I realised that if I did that I wouldn’t love myself anymore and I would be changing myself for someone else’s perception of beauty.

“I wasn’t sure if I was ever going to find someone who really loved me for who I am but after meeting Matt I couldn’t be happier.” 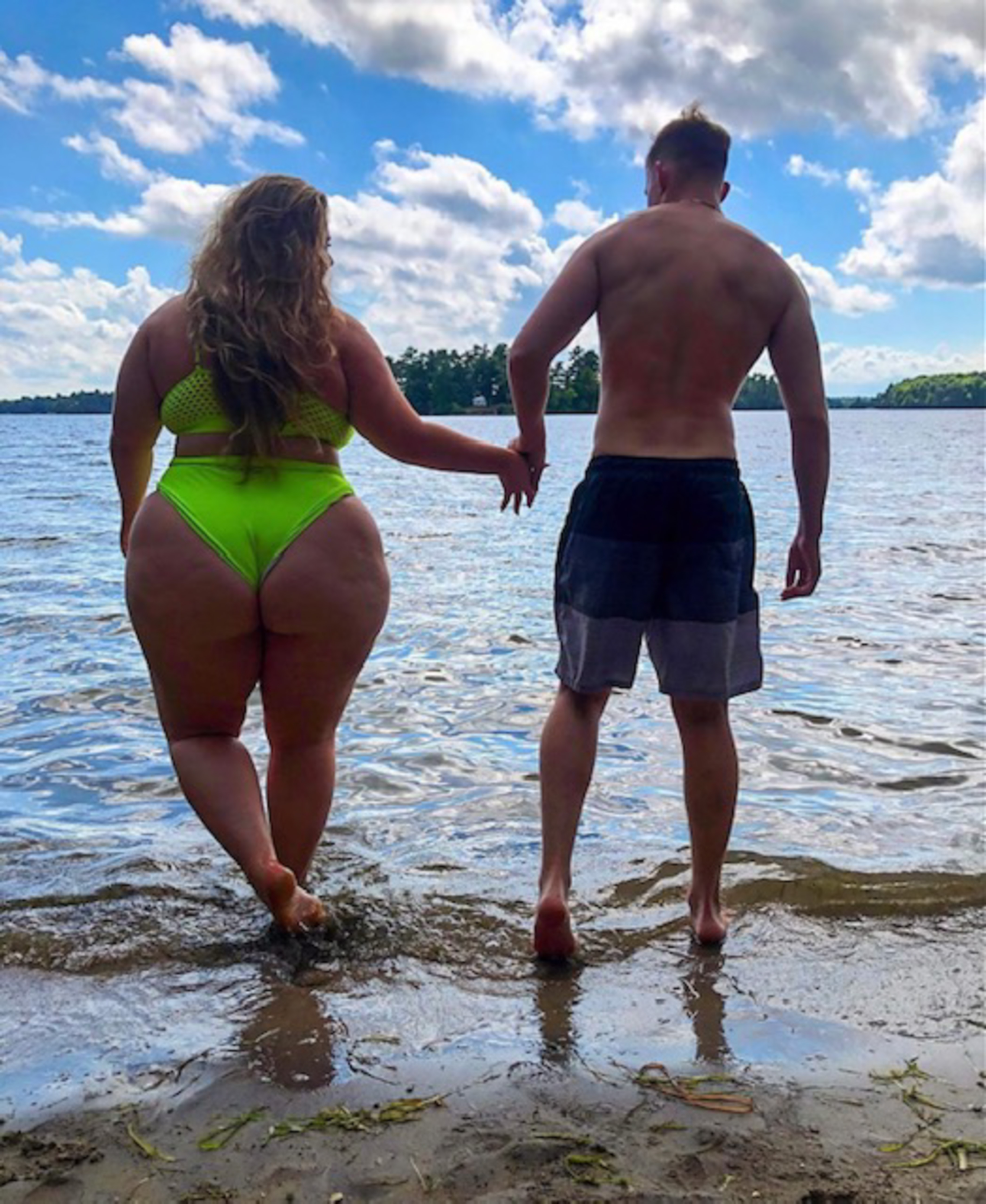 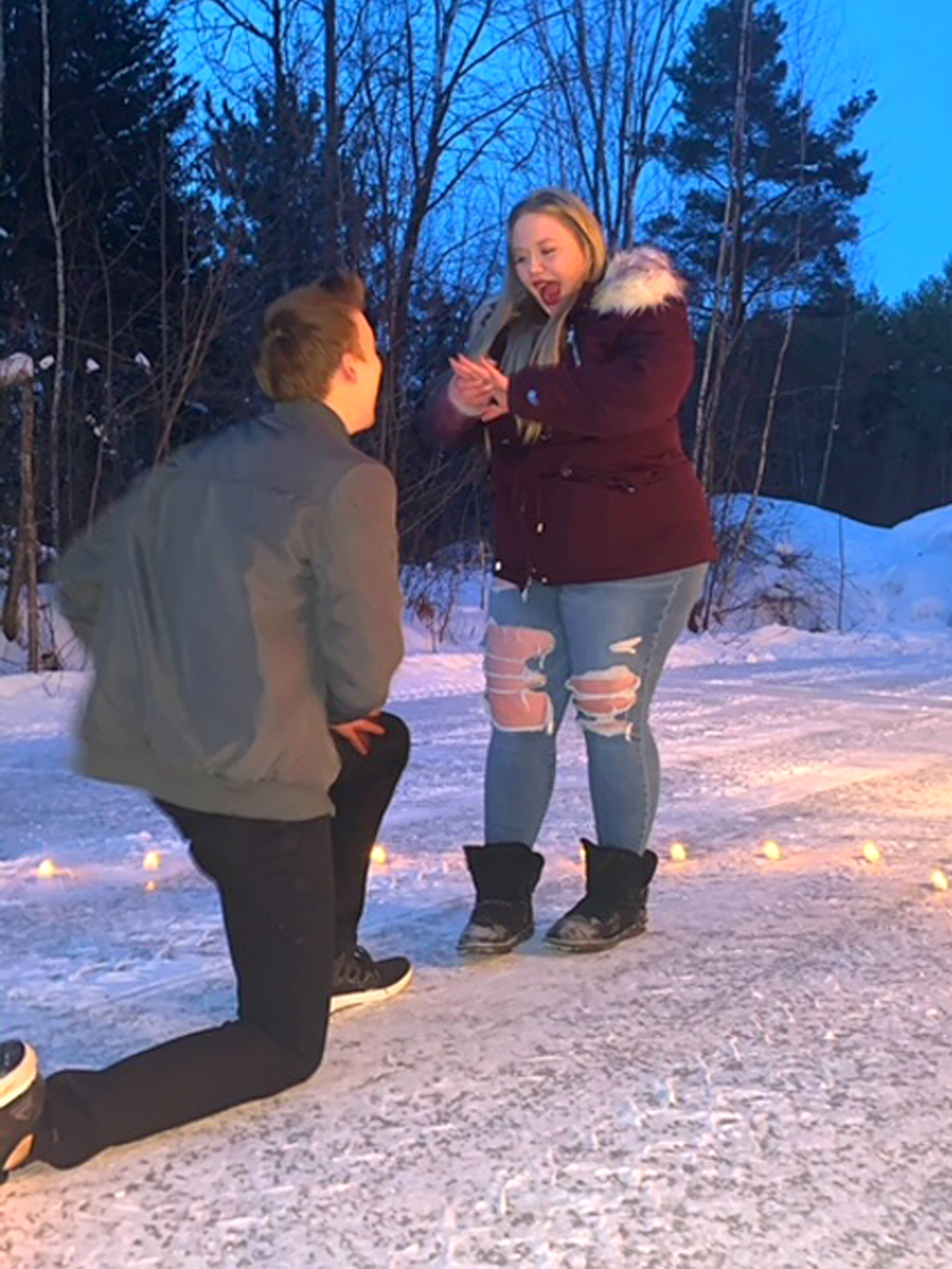 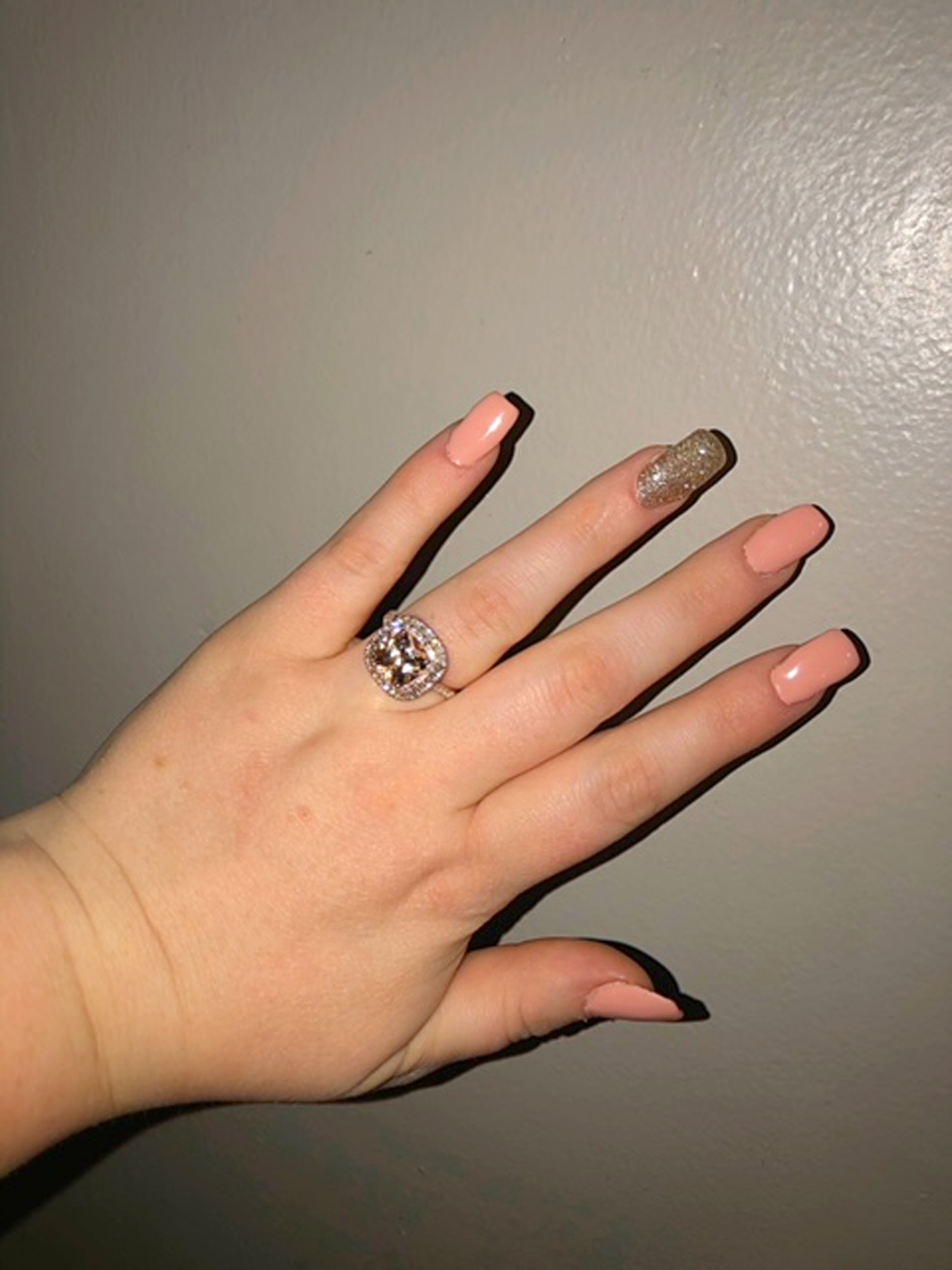 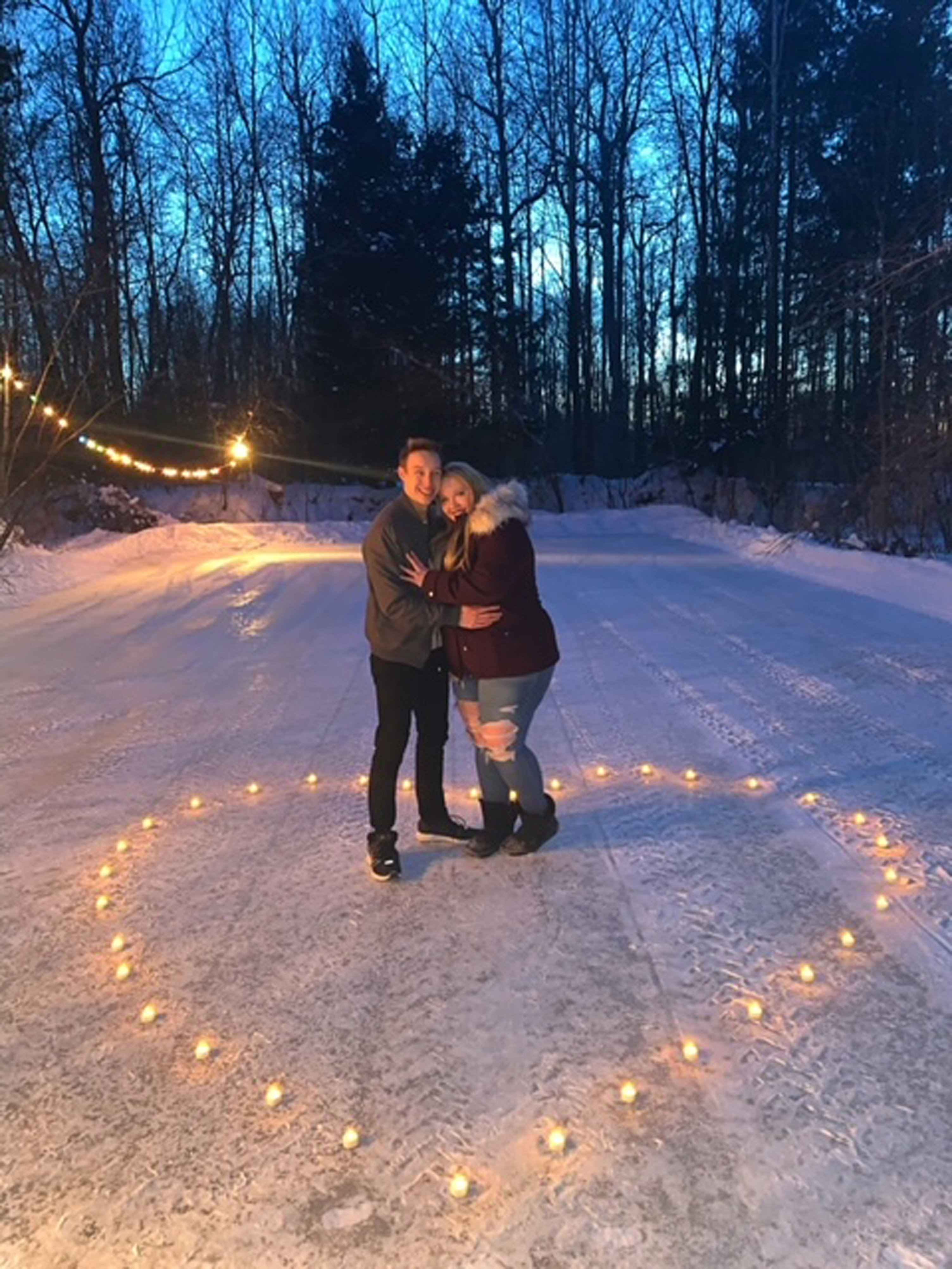 Instantly attracted to Brit’s self-confidence and body positive message, Matt revealed that his previous relationships with skinnier women had been littered with problems because of their body insecurities.

At a candlelit snow covered scene in the countryside near their home, 10st Matt popped the question to Brit on January 30.

He said: “I’ve been in previous relationships with skinny girls and they’ve not been happy in themselves at all.

“They weren’t positive people or they constantly felt like they needed to change things about themselves and it got me down too.

“When I met Britt she was so confident in her own body, I loved that about her, she doesn’t want to change anything and I would never ask her to.

“I love food as well so that’s a plus I’m not worried about tracking her calories or dieting, I just want her to eat what she wants and be happy.” 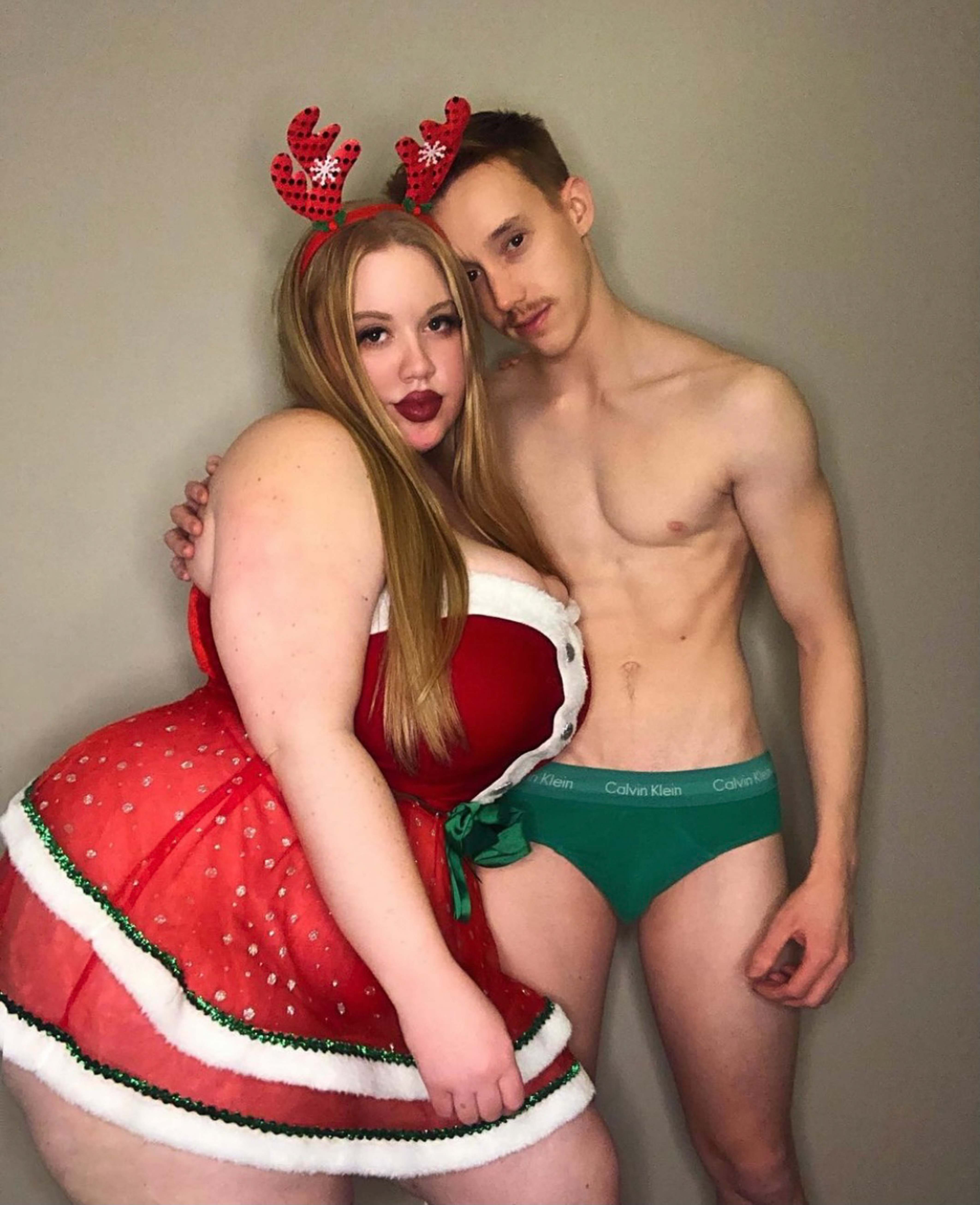 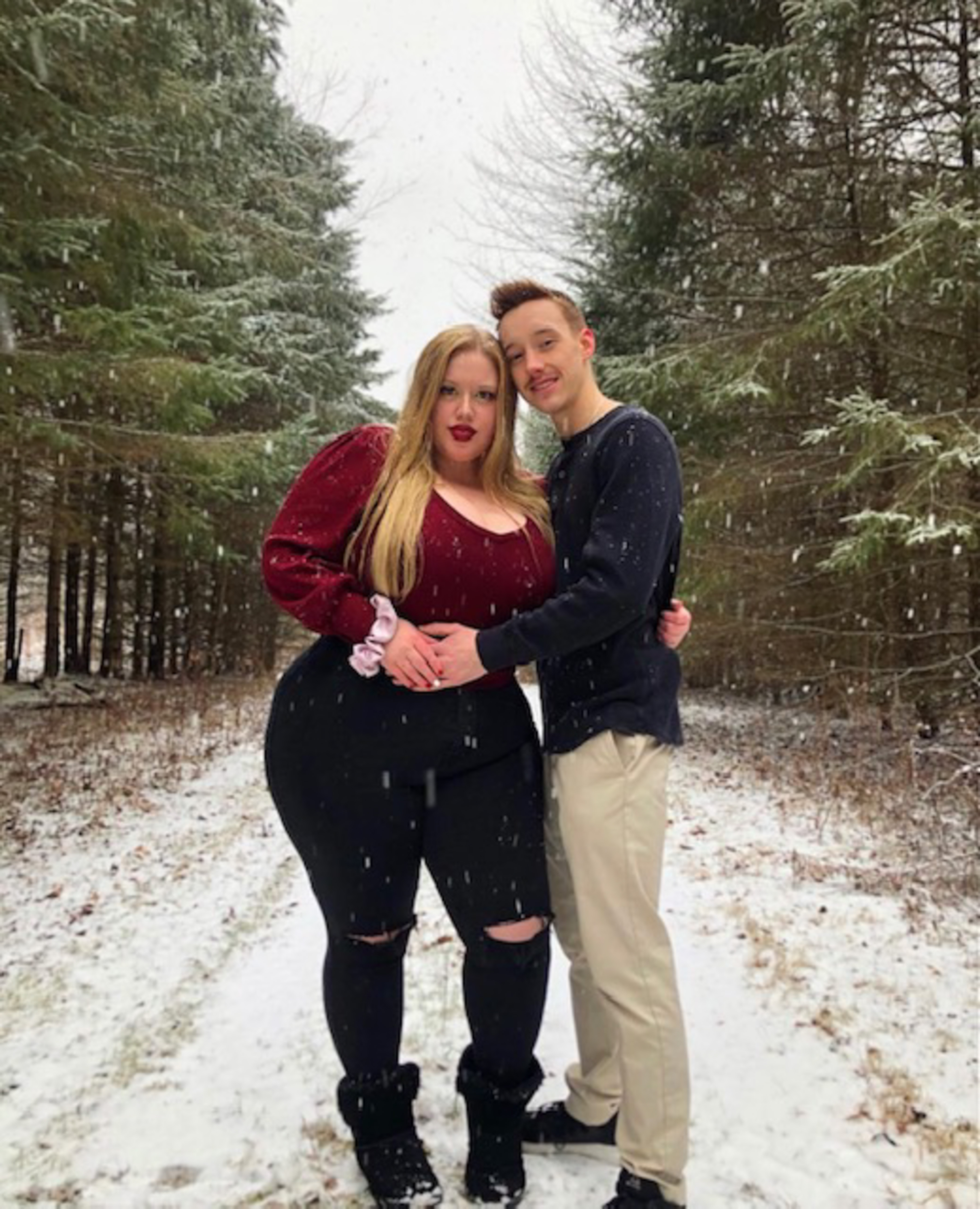 But despite their perfect relationship, the couple do face negativity from online trolls who suggest that they shouldn’t be together.

Matt said: “I do notice people staring when we walk down the street but most of the comments we have had have been online.

But the couple have dismissed suggestions that they can’t love each other because of their size difference and insist they want to see more mixed weight relationships normalised.

Vote for your Fabulous Mum of the Year and WIN

Do you know a mum who deserves some extra recognition? We want to pay homage to the best mums in Britain.

During the pandemic they’ve been busy juggling childcare, homeschooling and work, with the added stress of worrying about the health of elderly relatives and vulnerable friends.

It’s never been a harder time to be a mum, so this year it’s even more important to honour the amazing women in our lives.

Nominate her for our Fabulous Mum Of The Year Award and she could win an overnight stay for two at a Champneys spa of her choice complete with a Gold package, which includes four relaxing treatments for the ultimate pampering experience.

Two runners-up will Champneys goodie bag worth £50 plus a £100 M&S voucher and £200 Nutmeg at Morrisons voucher, and all three mums will enjoy a makeover with our glam squad before taking part in a photo shoot for the magazine.

If you want to nominate a mum then fill in the form here.

To enter, upload a photograph of the mum you are nominating and explain why they deserve to win.

The deadline for entries is Sunday February 14 and one winner and two runners-up will be announced on Sunday March 14. Good luck – we can’t wait to hear from you! 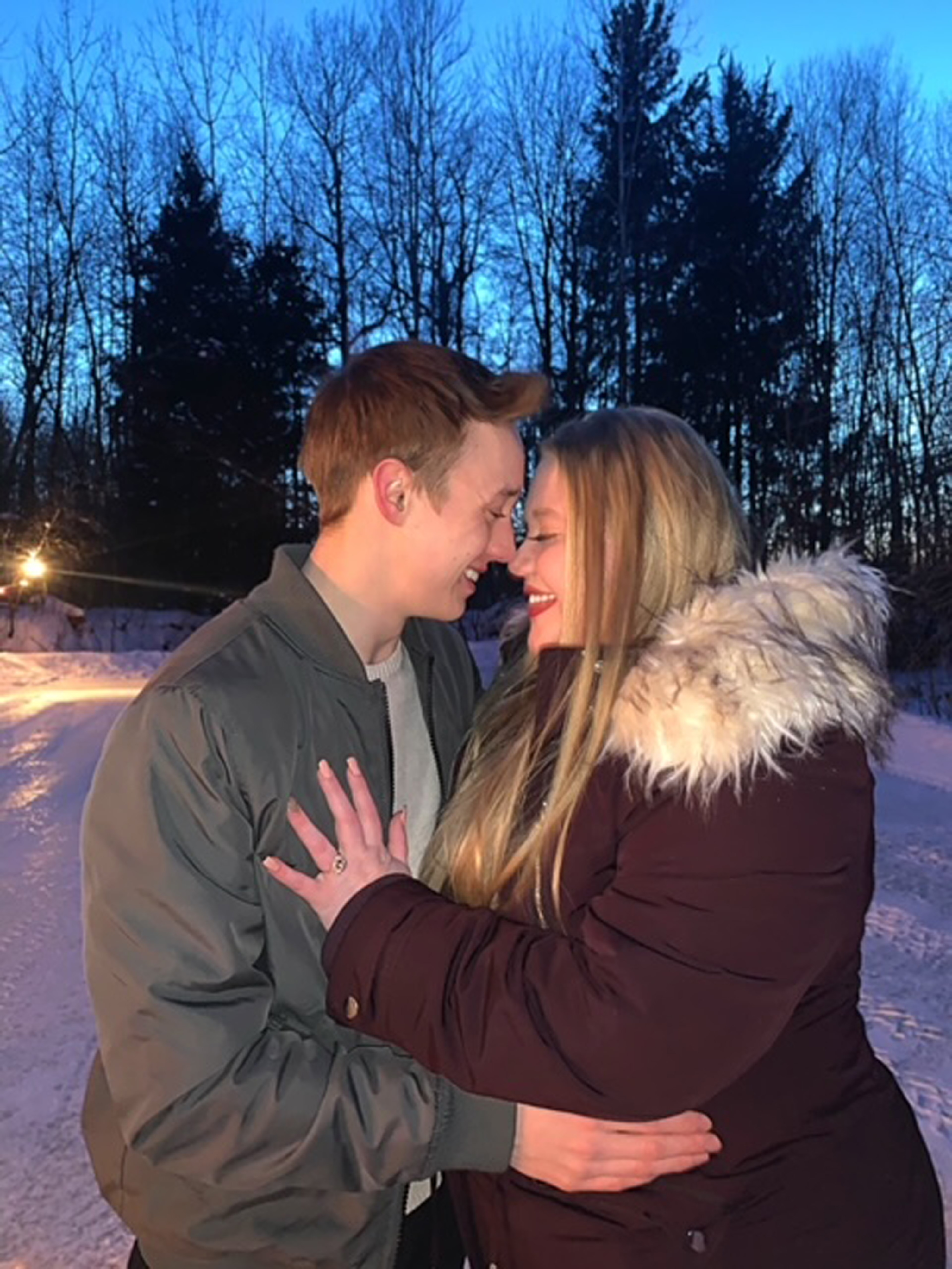 Brit said: “I wish mixed weight relationships were more common and more in the norm.

“There’s definitely this misconception that a fat person and a skinny person can’t be properly intimate or do things like start a family but we’ve never had any issues.

“We feel so lucky to have met each other and it’s the happiest we’ve ever been.”

Meanwhile, a mum who weighs 16 STONE more than her husband has revealed how their ‘mixed weight’ relationship is perfect.

We also gave you all the info on the man proposed to his girlfriend in the middle of his sister’s WEDDING.

And we told you about the married mum-of-three who rakes in £45,000-a-year cuddling total strangers.