Home » Fashion » ‘Some poise required’: Glamour in the gallery as the NGV celebrates McQueen

‘Some poise required’: Glamour in the gallery as the NGV celebrates McQueen

“There’s some poise that’s required,” Harlow, who delivered a modelling masterclass being sprayed with paint by robots in one of McQueen’s most memorable shows, says. “I want to do everyone proud.” 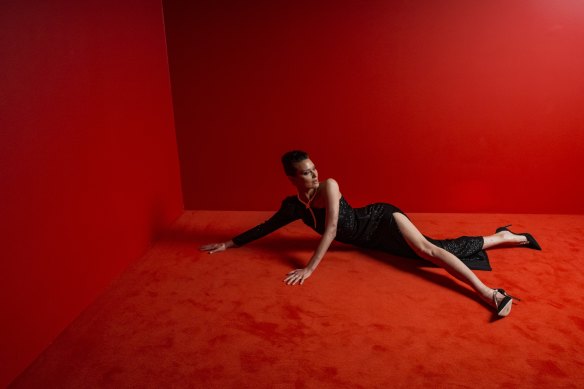 Supermodel Shalom Harlow worked with Alexander McQueen and is guest of honour for the NGV Gala opening an exhibition dedicated to his work.Credit:Chris Hopkins

In the first A-plus-list round of attendees, Elsa Pataky arrived on Saturday night at the gallery’s familiar water wall entrance on a cloud of feathers in a white Rebecca Vallance gown. Former politician Julie Bishop took to the familiar red carpet terrain in an embellished black dress with voluminous sleeves from Brazilian designer Patricia Bonaldi’s label PatBo, while model Victoria Lee got the memo on the theme of the evening in an abstract print Alexander McQueen dress with Valentino boots.

NGV director Tony Ellwood is quick to manage expectations by highlighting the differences between the two fundraising events in Melbourne and New York.

“The only thing we share is the word gala,” Ellwood says. “They were conceived differently and this has a local context, where a high percentage of people can attend with a more accessible ticket price.”

For The Met Gala, overseen by US Vogue editor Anna Wintour from beneath her fringe, tickets cost $35,000 for the more than 600 guests. The NGV Gala is divided into two tiers, with 400 invited guests paying $2000 for dinner. The more accessible party-only tickets cost 1000 revellers $375. Both tiers for the NGV event sold out on the day of release. 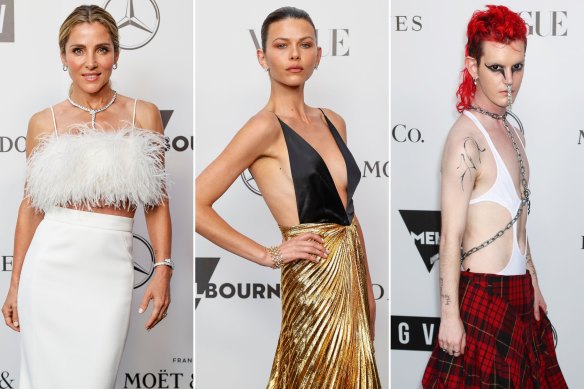 Elsa Pataky in Rebecca Vallance, Georgia Fowler in Gucci and performer Rufus Elliot at the NGV Gala celebrating the opening of the Alexander McQueen exhibition.Credit:Getty

“The idea for the event came from the community who were looking for a way to engage with the gallery in a glamorous manner,” Ellwood says. “We can do this because we have broad engagement through so many other programs with free and varied weekend programs. It’s not about exclusion. It’s another way of connecting with our fashion and design community.

“It’s about safe places for people who wear beautiful jewellery and high-end clothing.”

The focus on community avoids comparisons with an infamous fundraising fashion ball held at Sydney’s Powerhouse Museum in 2018, which cost $388,000 to stage and raised only $78,000. The heavy losses and accusations of excessive partying by attendees led to the resignation of director Dolla Merrillees.

Ellwood, who has remained the gallery’s director through previous successful galas, did not reveal the NGV’s fundraising expectations.

“The value of the level of exposure can be in the millions of dollars because of social media and a lot of that is because of the cut through of fashion and design and the calibre of celebrities and models attending,” he says. “Even when I am in London travelling for work, people talk about the Gala when they discover who I am.”

On the guest list alongside the early red carpet arrivals for an immersive party experience and performance by Yolngu rapper Baker Boy were Jess Hart, singer Troye Sivan and model Charlee Fraser in a gown by Maara Collective designer Julie Shaw, commissioned by the NGV.

Unlike Ellwood, Edwina McCann, editor-in-chief of Vogue Australia and another Met Gala attendee, sees more comparisons between the two events than just a four-letter word.

“Both require a huge vision and huge passion,” McCann says, “The reality is that there is only one Met Gala in the world, but both celebrate fashion as an art form and encourage fundraising for the collection.” 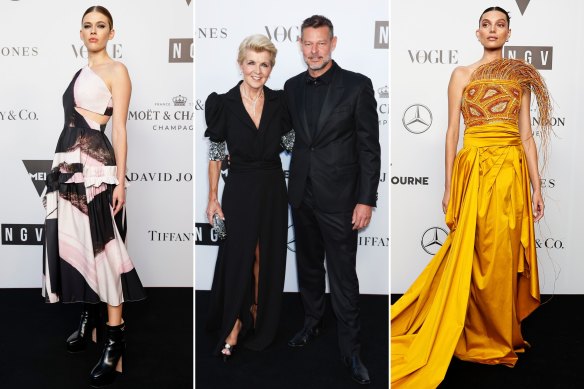 “It’s worth noting that when Anna Wintour came to Melbourne for the Australian Open in 2019 we took her and Baz Luhrmann through the NGV. Anna was so impressed by the work the NGV does, that she donated one of her Chanel Met Gala looks to their collection.”

These haute couture dresses traditionally go to Costume Institute at The Met in New York.

“Hopefully, that means they will be borrowing from the NGV for future retrospectives, strengthening their relationship” McCann says.

Joining McCann’s commitment to the event is a roll call of sponsors including David Jones, Moet & Chandon, Visit Victoria, Tiffany & Co. and Mercedes-Benz, eager to ride on the perfectly stitched coattails of McQueen for a share of edgy glamour.

For Mercedes-Benz the sponsorship, which extends beyond the Gala, throughout the exhibition’s run until April, is about more than being able to park a tartan-wrapped EQS vehicle directly outside the NGV’s main entrance without fear of a parking ticket.

“We have customers calling as soon as they hear about the event, asking about attending the event and getting special access,” says Jerry Stamoulis, Mercedes-Benz Australia’s head of media relations. “They are already asking about next year.”

At The Met Gala companies that buy tables such as Instagram, Gucci, Apple, Versace, Louis Vuitton and H&M, use the opportunity to rub exfoliated shoulders with the A-list, but Stamoulis is staying outside while the champagne corks pop.

“Our role for the Gala is to host a number of VIPs for transfers before they go onto the carpet,” Stamoulis says. “We sell cars. We have cars. It makes sense.”

While the supermodel, designer and celebrity wattage of guests exiting vehicles at the NGV will be is less than the Met Gala’s roster, where Rihanna, Kim Kardashian and Lady Gaga frequently appear, McCann says it still connects with fashion.

“This not only an event that students and designers wouldn’t normally be able to attend but an exhibition of an incredible designer that they wouldn’t be able to see,” McCann says. “It might not be the Met Gala, but I really can’t think of anything else to compare it to.”