What We're Thinking is a weekly take on the fashion issues and questions on our minds – from what we adore to what we abhor. 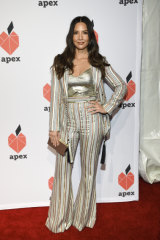 Actress Olivia Munn in the suit that was slammed by fashion blog Go Fug Yourself.Credit:AP

In the past 10 days, two celebrities were criticised over things they wore. In one corner, actress Olivia Munn, of Newsroom and X-Men fame, hit back after a well-known fashion blog critiqued some of her outfits, while in the other corner, Helena Christensen was chastised for wearing a black bustier.

Let's start with Munn, and why the episode made headlines around the world. On April 18, the blog, Go Fug Yourself, which is a little like Fashion Critical, posted an article with the headline: "If Only I Had a Dollar For Every Time I’ve Said, 'Oh My God Olivia Munn'."

In the piece, the author, Jessica Morgan, said Munn's striped suit looked as though "she got roped into making a sequel to American Hustle that ended up going straight to on-demand".

The comment was kinda funny but prompted Munn to launch an Instagram tirade against Morgan and her co-editor, Heather Cocks, for perpetuating the "suppression of women".

"For years, fashion-policing celebrity has been an accepted mainstream media critique, even though it mainly focuses on females and not men, which ultimately contributes to the perpetual minimisation of women and propogates the idea that our worth is predominantly (or singularly) tied to our looks," Munn wrote.

Now, let's pause to consider the example involving Christensen, the one-time supermodel who at 50 is every bit as stunning as she was in her 20s.

Christensen was photographed last week attending a party wearing a strapless black lace bustier, which prompted former British Vogue editor Alexandra Shulman to say she was "too old" to wear the "tacky" garment.

“Something you wore at 30 will never look the same on you 20 years later. Clothes don’t lie,” Shulman wrote in a column for the Daily Mail. “When women’s bodies no longer serve any child-bearing purpose, we find flaunting them disturbing and slightly tragic. I don’t claim that this is fair. But it’s true.”

Hold up. Let's just ignore the fact that Christensen looks good in anything she wears, and is also a warm, funny and charming person who shares many aspects of her life on social media (including some of the "ugly" ones). Where does Shulman, or anyone, get off telling a woman of any age what she can and can't wear?

Sure, there is a huge social issue around the sexualisation of teenagers, some of which can be linked to the clothing choices available to parents and tweens these days. But criticising a woman at the other end of the spectrum, who made her living from wearing beautiful clothes, for being "too old" to wear a bustier? Come on.

And here lies the core difference between playing the outfit, or suit in the case of Munn, and playing the woman. Had Shulman, or any fashion writer, critiqued Christensen's bustier for its aesthetic, or design, then fair play.

But criticising the woman making the choices, unless she is being accused of tone-deafness (for example, Melania Trump's “I don’t care” jacket) or some other fashion-led transgression such as cultural appropriation, is never OK.

When it comes to covering red carpets, most fashion writers, myself included, work hard to play the outfit, not the woman. In the case of Munn, Go Fug Yourself was entirely above board with its critique of the suit. Nowhere did they focus on Munn's looks, age, weight or any other factor that so often creeps into legitimate fashion critique.

Which is why in response to Shulman's diatribe, Christensen didn't get mad, she got even, posting a photo of herself in the bustier, with the caption: "Let’s continue to elevate and support each other, all you beautiful, smart, fun, sexy, hard working, talented, nurturing women out there."

Essentially, she told Shulman to go fug herself. And good on her for doing it.

between, difference, playing, the
World News