The Last Five Glamour Shots Locations in the United States

EL PASO — Glamour Shots was once the coolest store in every mall. Boomer mothers and Gen-X teens and 20-somethings paid $29.95 for makeovers and photography sessions defined by big hair, white satin gloves, heavy eye shadow and contemplative poses, in an era when pictures were taken for special occasions and not just to commemorate every brunch.

At its mid-90s peak, Glamour Shots had more than 350 stores, with licensees in Venezuela, Japan, the United Arab Emirates, Kuwait and Saudi Arabia.

Now, in 2019, just five stores remain — although there were seven stores last month. Most of these scant survivors have adapted with the times. What they have in common is that each is steered by devoted, longtime owners who have embraced a more natural look and whose business and photography skills were enough to persuade families, professionals and high school kids that a glamour shot could be taken for work, special occasions and graduations — not merely for entertainment.

Louisville, Ky., still has a store. And Staten Island has one, owned by Cara Lovello, who uses her popular Instagram account where she showcases her makeup artist skills, to direct followers to the Staten Island Glamour Shots handle. 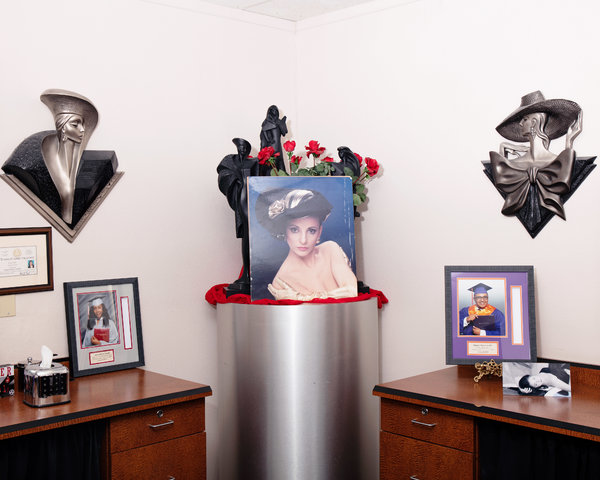 Two stores remain at malls in Bridgewater and Freehold, N.J. The secret to their endurance? “We’re in New Jersey,” said Cliff Eng, the owner of both. “We got malls everywhere.” Another Glamour Shots store owned by Mr. Eng in Rockaway, N.J., closed just last week. Mr. Eng said the mall ownership was not being flexible on rent. But he's still optimistic about Glamour Shots — Mr. Eng is already evaluating options for a new Glamour Shots at malls in Paramus and Cherry Hill.

But at nearly the same time, a Glamour Shots in Ellicott City, Md. also closed and was disappeared from the Glamour Shots website.

And the fifth remaining Glamour Shots is in El Paso — the last location west of the Mississippi.

El Paso is the only city in the world where it’s likely that a majority of millennials have a glamour shot.

A glamour shot was not subtle. The makeovers were about big hair, doused in spray, and heavy amounts of foundation, powder and blush intended to make the customers, almost always women, feel like they were preparing for the runway. Staff at a Cincinnati Glamour Shots once boasted they could turn any customer into Cindy Crawford. They’d even paint on a mole.

For the photos, women picked four outfits from an assortment of jackets, wraps, furs, bustiers and dresses. Sequins were practically mandatory.

The photographers shot only from the waist up. They used camera filters that smoothed out wrinkles and blemishes. After the photo session, customers viewed their pictures on a video screen — immediately, thanks to proprietary technology — and selected their favorite looks. Jack Counts Jr., the Oklahoma City entrepreneur who started the company, described the filtering and makeover method that allowed customers to see a touched-up version of themselves as a precursor to Instagram but “in a real way.”

Mr. Counts was already owner of a photo finishing business called Candid Color Systems in 1988 when he learned of a store in Hawaii that offered a makeover with a photo session. His original location in Oklahoma City had the name Fantasy Faces. The company didn’t take off until he opened a store in Dallas that went by Glamour Shots.

Ads with before-and-after photos landed in almost every local newspaper. Olympic figure skater and ’90s icon Tonya Harding visited a studio in her Oregon hometown multiple times, according to The Vancouver Columbian.

In 1996, Glamour Shots was seeing $100 million in sales and had 6,000 employees, according to estimates from The Wall Street Journal and The Oklahoman at the time.

But the brand was based on a fashion trend that had already crested. By the late ’90s, said Jimmy Paul, a well-known hair stylist, grunge had gone mainstream, and looks shaped by Helmut Lange and Prada ushered in the minimalist era. “Makeup and hair got very stripped down,” he said. “It became about flat irons and straightening.”

While the portrait studio business overall remained stable — census figures showed modest growth in the industry from the late ’90s until the 2008 recession — many of the 350 Glamour Shots stores folded by the end of the 20th century, unable to escape their association with the outdated style.

“It just became passé,” said Bob Eveleth, the first Glamour Shots licensee and owner of nearly 50 stores at the company’s peak. “We did one focus group in North Carolina. One of the guys was talking about giving Glamour Shots gift certificates as a joke. And I thought we kind of crossed that threshold.” (Mr. Eveleth is doing fine.)

The remaining stores wilted in failing malls that charged steep rents. Then Apple and Samsung equipped every cellphone with a quality camera. About five years ago, with 30 to 40 stores left, a popular Groupon promotion provided a fleeting burst of new customers before technology almost completely wiped out Glamour Shots altogether.

Mr. Eng, the owner of the two remaining New Jersey locations, was the go-to guy for Glamour Shots modernization in the early 2000s. He traveled all over the country, advising stores to ditch the old wardrobes, offer boudoir sessions and business headshots, take full-body photos and emphasize a more luxurious, more expensive spa experience. The average sale at his stores is around $500, compared to $100 for typical stores in the ’90s. The high prices are the only way for Mr. Eng to cover his $12,000-and-up monthly rents, which he said he was currently trying to negotiate down.

Ms. Lovello, 32, started working at Mr. Eng’s Bridgewater store when she was 16. She doesn’t remember the big hair days of Glamour Shots and mostly keeps a no-90s policy at her store in Staten Island. “You’re not going to bring a boa in here,” Ms. Lovello said. “Let’s be real.”

People walking by the New Jersey stores now see giant photo collages of customers who have gone the natural route. Mr. Eng needs them to know Glamour Shots has changed.

But in El Paso, Leonora Campbell pivoted faster and more furiously than everyone else. She has defied major shifts in technology and fashion to sustain her business for nearly three full decades. Now 65, she opened her Glamour Shots in 1991.

Ms. Campbell moved to the U.S. from Antigua, Guatemala, on a student visa at age 16, and spent her first night on a restroom bench at the Houston airport after missing a flight connection. She received a business administration degree, had a daughter, and once worked at a grand department store in El Paso called The White House. That’s where Ms. Campbell met a man she said was a former Calvin Klein model. They would marry but he also introduced her to Glamour Shots, a more enduring relationship.

She studied photography for a year before opening the store. When she did, she set up video screens that were visible from the outside, and mall visitors gathered on benches to see which portraits customers would choose.

In 1997, ahead of the curve, Ms. Campbell moved her store out of the mall to a strip center about eight miles east of downtown. Other Glamour Shots owners told her she would fail.

But the strip center location better accommodated her mostly Spanish-speaking clientele. The larger store has room for the extended families she previously needed to turn away. Teams of young women in escaramuza charra uniforms can bring their horses to the studio’s back parking lot for team portraits. Without needing to keep mall hours, Ms. Campbell can also venture out to shoot quinceañeras.

And, when the Americas High School opened at around the same time, it offered her a contract to be the exclusive student photographer. With an endless stream of customers, Ms. Campbell wasn’t that interested — but she accepted, figuring she could cancel if it didn’t work out.

Now she and her staff have contracts with 20 area high schools.

In Ms. Campbell’s Honda Odyssey (with nearly 200,000 miles on it), she and the team travel to photograph the underclassmen for yearbook photos. Seniors, accustomed to seeing the Glamour Shots logo on the staff’s black polo shirts, also come down to the studio for their senior portraits.

The consistent churn of high schoolers from the last two decades means that, while Ms. Campbell revenue isn’t quite what it was in the mid-90s, now she knows or has shot almost everyone in El Paso, including superintendents, firefighters, workers in Beto O’Rourke’s congressional office and the singer Khalid, of “American Teen” fame.

“We kind of call her our mother,” said Ashley Diaz, 31, a high school teacher who works frequently with Ms. Campbell. “She has our back.”

She and her ex-husband divorced amicably not long before she moved her store to the strip mall. “I knew your baby was Glamour Shots,” Ms. Campbell remembers him telling her. It is: A trip home to Antigua this year for Holy Week marked Ms. Campbell’s first vacation in nine years.

“There’s still like some kind of security,” she said, “about having the large, branded name Glamour Shots.”

The name does have a currency. When Mary Swope, 53, first went in 1994, she chose a look — curled hair, bangs, hoop earrings and a black jacket — that was “completely out of my comfort zone,” she said.

And, 23 years later, Ms. Swope, while taking care of her ailing mother, realized she wanted a quality photo of herself to later pass down to her children and grandchildren. Her memory from Glamour Shots inspired her to drive two and a half hours from Lancaster, Pa., to the nearest store, in Bridgewater.

Sonia Frontera, an attorney and author in Lambertville, N.J., also recently went to the Bridgewater Glamour Shots, but for a LinkedIn profile picture. She remembered a friend who spoke highly of the chain during their law school days in the 1990s. After she saw how good she looked in the recent photos, Ms. Frontera signed up for boudoir shots.

“I find my glamour shots to be very empowering,” she said.

The experience still had friendly reminders of the Glamour Shots of Gen X yore. The makeup artist didn’t assume Ms. Frontera would prefer a natural, modern look, for example. About to apply foundation, she asked: “Do you want it dramatic?” Ms. Frontera did not.

In the back of Ms. Campbell’s El Paso store, next to a set of graduation gowns, she keeps pink and white feather boas for the rare customer who desires some retro style. 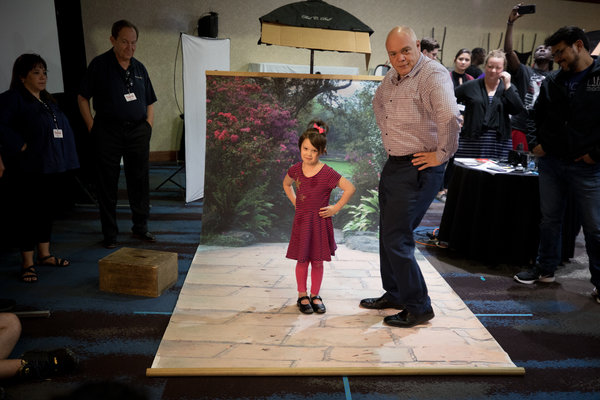