This summer, when cameras at the Tokyo Olympics zeroed in on the British diver Tom Daley, he was nearly always knitting: by the pool, in the stands, on the bus.

The needles and yarn became Mr. Daley’s signatures, second only to his newly minted gold medal. BuzzFeed deemed his crafting worthy of its own Olympic honors. On social media, knitters, crocheters and would-be crafters swooned over his calm demeanor and steady stitches.

Mr. Daley, 27, was among the many of us who turned to craft in the early days of the pandemic as a tactile balm for anxious times and a replacement for disrupted rituals. He had been training for the 2020 Games for four years, and all of a sudden they were off the calendar. Mr. Daley and his teammates were used to going to the pool every day and following a regimented training schedule; Britain’s stringent lockdown upended that.

His sofa cushions became a crash mat for practicing somersaults and the gymnastics that make diving mesmerizing to watch. Spin classes, runs and team workouts on Zoom became the norm. The time at home meant he could bond with his young son, Robbie, and his husband, Dustin Lance Black. But he also yearned for a new challenge — something he could take on in his downtime. 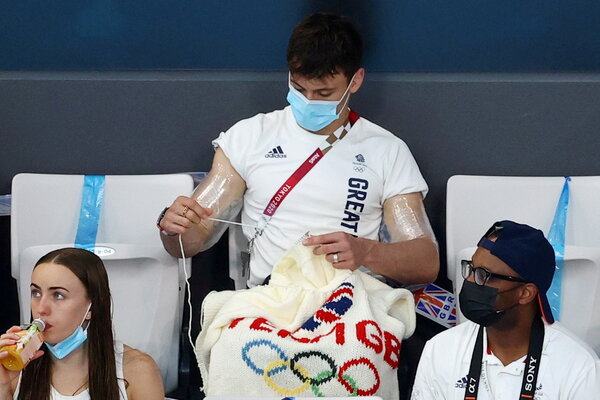 At his husband’s suggestion, Mr. Daley started watching intro knitting videos on YouTube while traveling for a competition in Canada.

“At first, I was actually terrible at it,” he said.

Beginning knitters and crocheters know just how difficult it is to pick up foundational techniques for the crafts from videos alone. But after lots of practice and consultations with other divers and coaches about their own dabbling in fiber arts, Mr. Daley found his footing.

“Each new project I started, I wanted to learn a new stitch or a new skill,” Mr. Daley said. “I was completely obsessed with it.”

After mastering the basic knit and purl stitches, Mr. Daley conquered the more complicated colorwork knitting techniques and last August added crochet to his craft repertoire. His crafting Instagram, @madewithlovebytomdaley, features his own creations as well as those made following popular patterns and kits from companies like Wool and the Gang and We Are Knitters.

Once in Tokyo, Mr. Daley’s new hobby became even more essential. Pandemic safety measures kept the Olympians isolated, which gave them ample time to overthink every little movement. Knitting became not just a downtime diversion for Mr. Daley but a way to manage his anxiety.

“I was very grateful to have my little cardigan project to give me that little bit of a healthy distraction and at the same time find calm and peace,” he said.

The 2021 Olympics were a watershed moment for athletes speaking out about mental health and choosing, in some cases, to prioritize their well-being over competition. Because their jobs push their bodies to limit, many Olympians have sought out restorative practices, like spending time with loved ones, writing and going to therapy.

Some studies suggest that knitting, crochet and other crafts can alleviate symptoms of anxiety, depression and loneliness. The repeated motions involved in crafts are meditative and require focus on the task, which can help crafters find a healthy distraction from stress. In a 2013 paper published in the British Journal of Occupational Health, crafters reported feeling happier and more calm. And craft communities can serve as a needed social connection in our lives, especially in difficult times.

Mr. Daley’s Olympic knitting certainly has brought even more attention to the crafts. But he is using his platform and his knitwear for much more.

Rather than letting the cardigans, sweaters and hats gather dust in a closet, Mr. Daley regularly raffles off pieces he makes and donates proceeds to the Brain Tumour Charity in memory of his father, Rob Daley, who died of brain cancer in 2011.

Mr. Daley made his Olympic debut when he was 14 at the 2008 Games in Beijing. He brought home a bronze medal in the 2012 London Games and the 2016 Rio Games. In those early years of his career, he faced bullying at school and a flurry of unwanted attention from the British tabloids, including suggestions that he wasn’t taking his diving career seriously.

At the same time, he was grieving the loss of his father and learning more about himself. After falling in love, he announced in a 2013 YouTube video that he was gay.

“I met someone,” he said in the video. “They make me feel so happy, so safe. Everything just feels great. And well, that someone is a guy.” (Now they’re married.)

Outside of the pool, Mr. Daley is dedicating time to L.G.B.T.Q. activism. He said that when he was growing up he felt like an outsider. “I never thought I would be able to do anything, because you don’t see yourself represented in that way,” he said.

But much has changed in terms of representation in sports since he came out to the world. At least 185 athletes at the Tokyo games publicly identified as gay, lesbian, bisexual, transgender, queer or nonbinary, which is more than at any of the previous summer Olympics combined, according to Outsports.

“The fact that more people are out, I think is going to really help inspire young queer kids that don’t necessarily know if they’re ever going to make anything of themselves,” he said. “I want to try and help continue to spread that message to try and make it as equal a playing field for all as possible.”

Where does he go after bringing home a gold medal, becoming a meme and taking the crafting world by storm? For starters, he has written a memoir, “Coming Up for Air,” which is due out this fall. He also said he is serious about becoming a knitwear designer.

“I would love to make it more accessible for people to learn that they can see something in the shop and then make it themselves.”