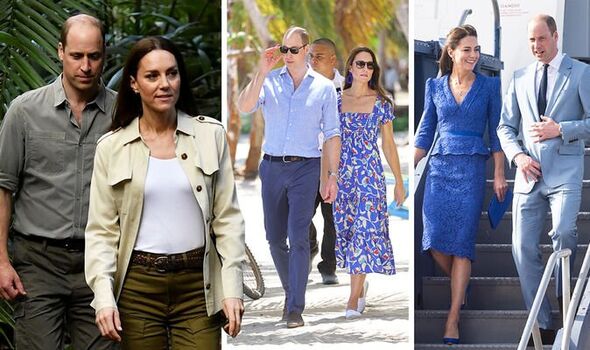 Kate Middleton and Prince William are currently halfway through their royal tour of the Caribbean. Yesterday, the Duke and Duchess of Cambridge touched down in Jamacia, after spending a couple of days in Belize. Over the past few days, the royal couple has been seen in the same colours or coordinated tones. Express.co.uk spoke to Rosie Hartman, Hirestreet’s Strategy and Styling Lead about Kate and William’s fashion choices, and she shared some of the best dresses inspired by Kate’s that are available to hire.

When the couple touched down in Belize, Kate opted for a lace Jenny Packham suit, featuring a peplum top and knee-length pencil skirt, in a cobalt blue that paid tribute to the country’s flag.

William, on the other hand, chose a powdered blue suit and white shirt.

The dress’ background colour was cobalt blue and had a large white, red and turquoise leaf pattern adorning it.

The Duke chose a sky blue linen shirt and navy trousers for their visit to the Garifuna community.

While visiting Caracol, an ancient Mayan archaeological site in Belize’s Chiquibul Forest, Kate looked every inch “Queen of the Jungle”.

As the day got cooler, she added a cream cargo shirt over her white t-shirt.

William wore khaki trousers and a grey shirt for the occasion.

When attending a reception hosted by the Governor-General of Belize in celebration of The Queen’s Platinum Jubilee that evening, Kate wowed her audience with a pink evening dress.

The gown by The Vampire’s Wife was bright pink, in a shimmery material, and featured flouncy shoulders and a tie waist.

With Kate centre of attention, William kept it smart and understated in a royal blue suit and pale blue shirt.

GET THE LOOK: Dazzle in pink with the LEXI Fuchsia Scarlet Maxi Dress

Speaking about the similar colour choices the royals have made during their trip Rosie said: “Kate is wearing colour pop looks which work for the sunnier climate.

“The on trend cobalt, pinks and khakis have been seen on catwalks and on the high street this season.

“She is choosing colours to reflect the vibrancy of the Caribbean but they are keeping true to her own style.

“The royal blue we have seen echoes the dominant colour of the Belize flag.

“This could also be seen as a subtle show of support to the Ukrainian people,” she added.

“We have seen William and Kate co-ordinate outfits occasionally in the past, but they have taken their ‘couple-outfit-goals’ to the next for level for this Caribbean Tour.”

The style expert went on to explain the message Kate and William could be projecting by coordinating their outfits: “It is a clear sign of unity and togetherness – which the world needs more of right now.”