A PROFESSIONAL cleaner explained how she gets her client’s bed to look so fluffy and luxurious – but people were stunned to hear that the secret is three duvets.

The bed also features a total of eleven pillows, and though it looks decadent, some viewers say it’s too much. 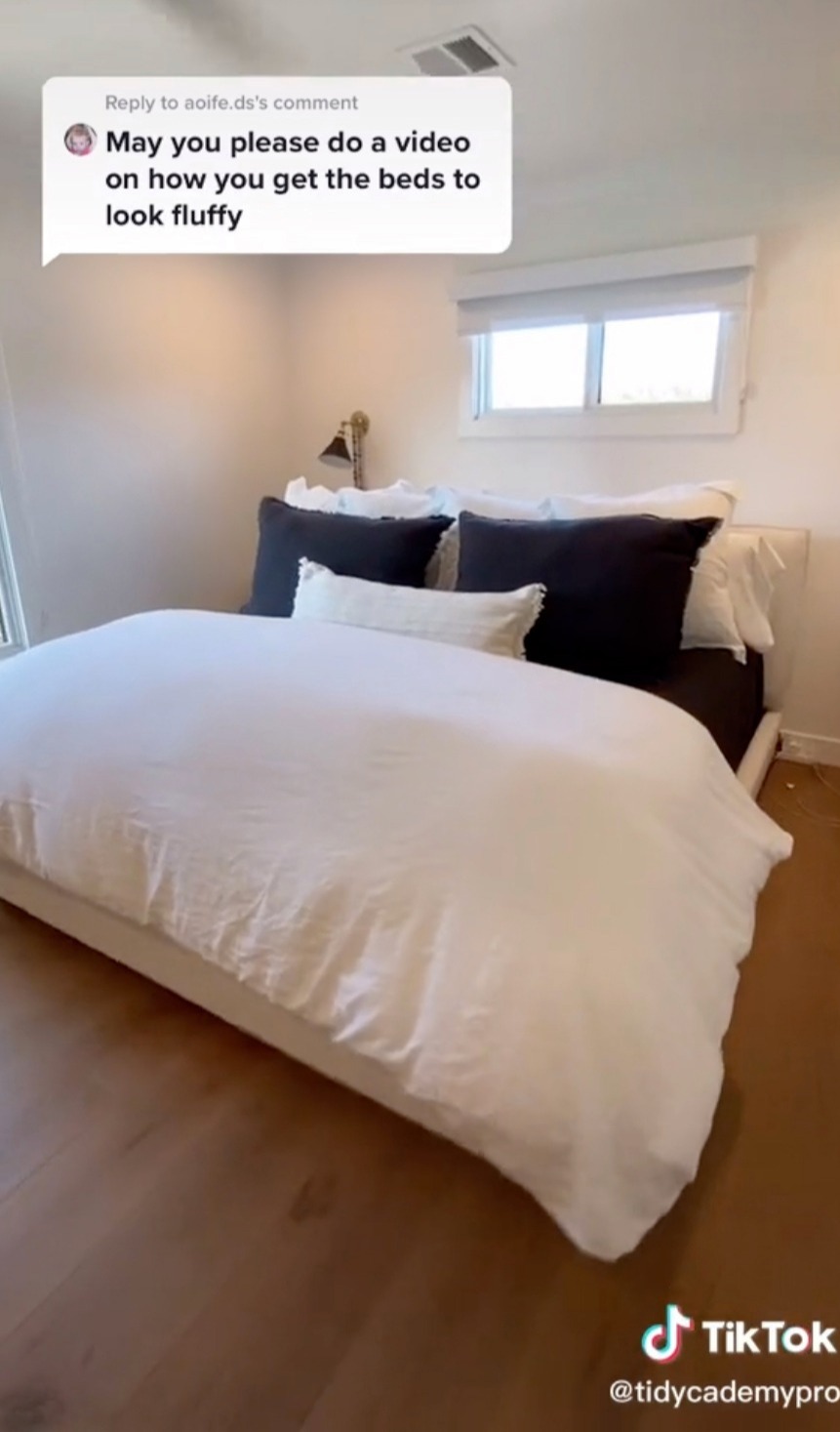 A professional cleaner and Tiktok user, who goes by the username tidycademypro, explained how she gets her client’s bed to look super luxurious.

She said: “How do you get your bed to look this big, full, and fluffy? This is my client’s bed and I’m gonna show you how to make it."

She said that using multiple duvets is “the reason this bed is so big and fluffy”.

She specified that the bed actually uses three duvets in total. 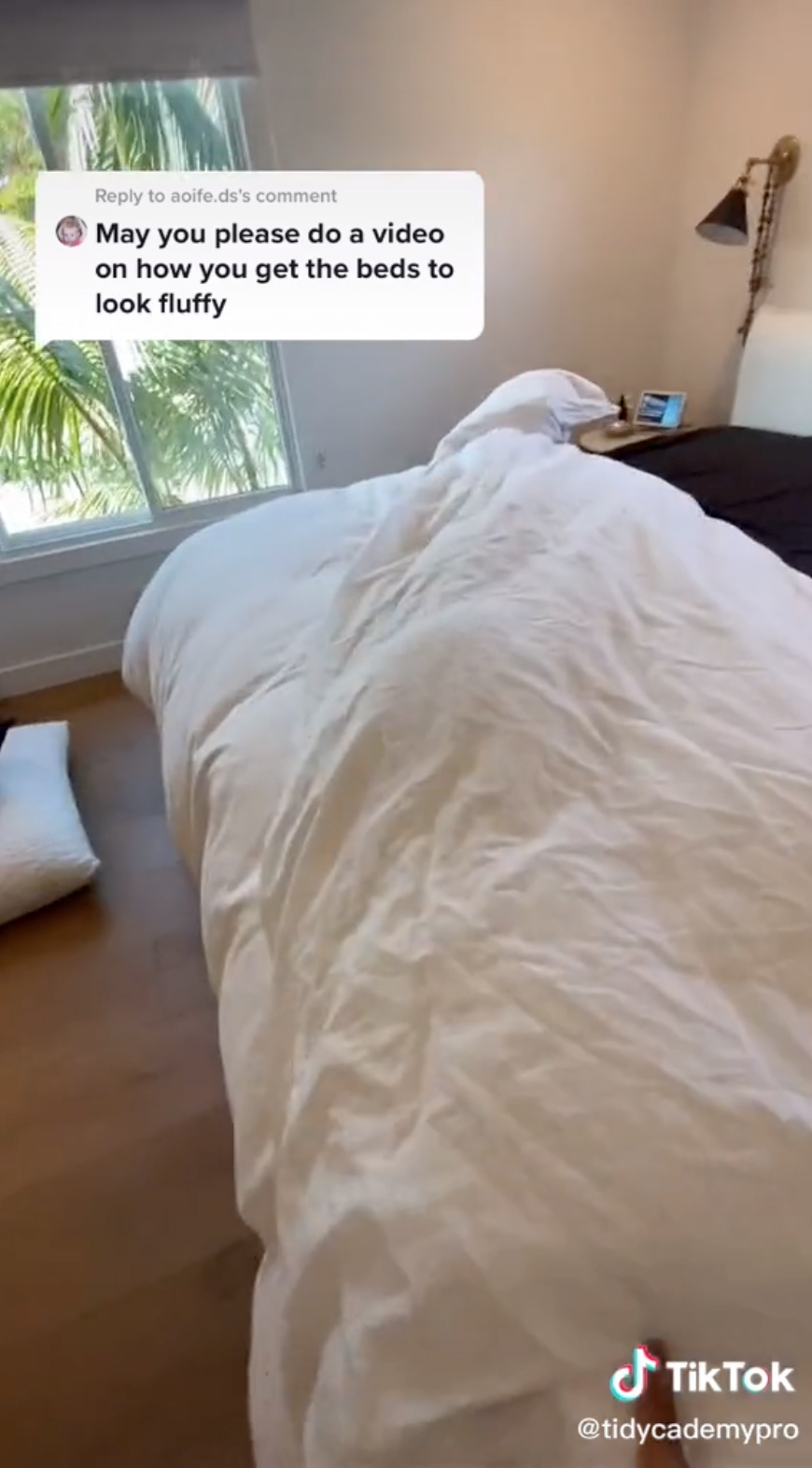 She explained: “My client said there are two duvet inserts in the white duvet comforter. So three comforters total!”

The two duvets used inside one duvet cover are both filled with down feathers, which makes the bed look even fluffier.

She explained that one duvet is placed on top of the mattress and then tucked into the bed, like a fitted sheet. 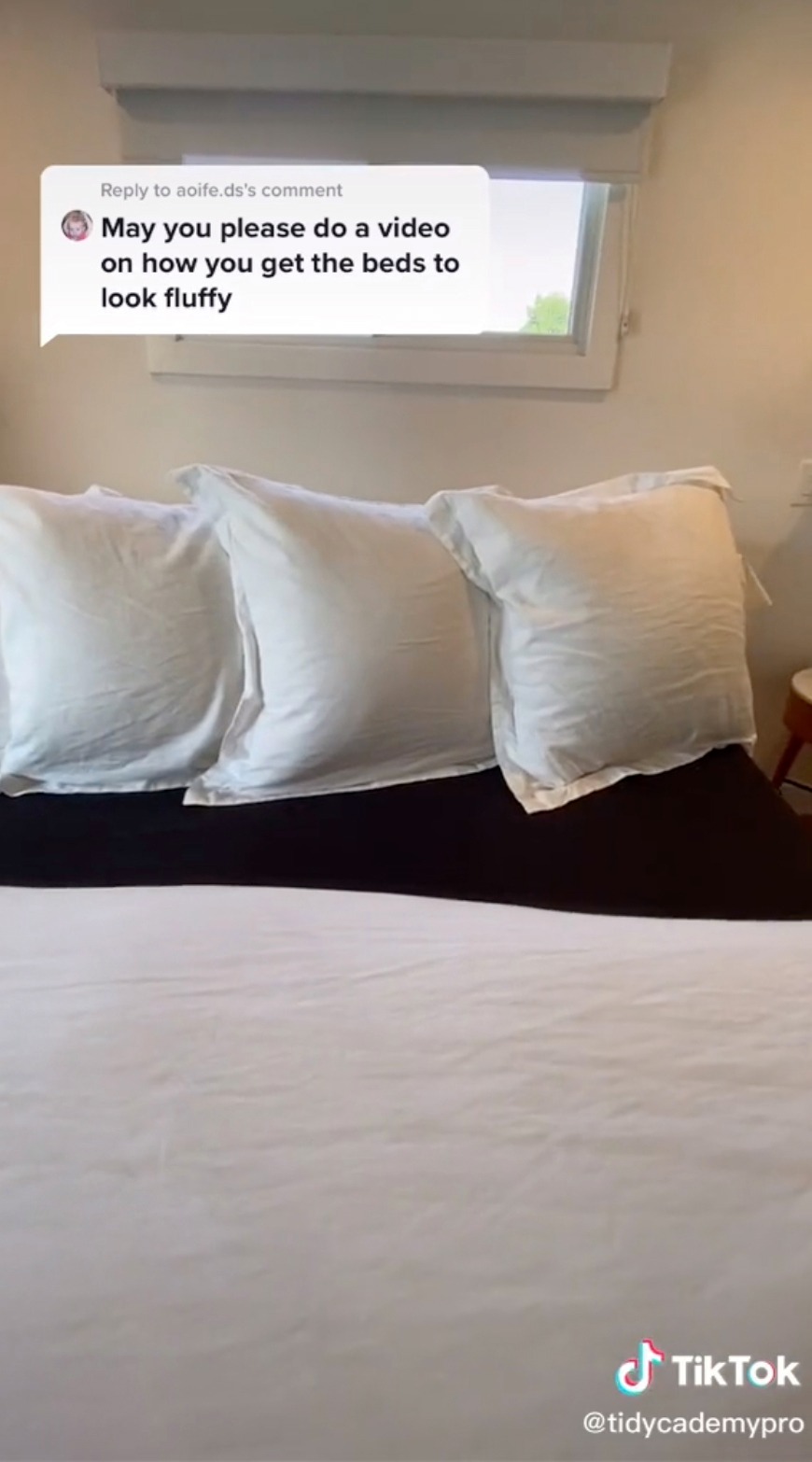 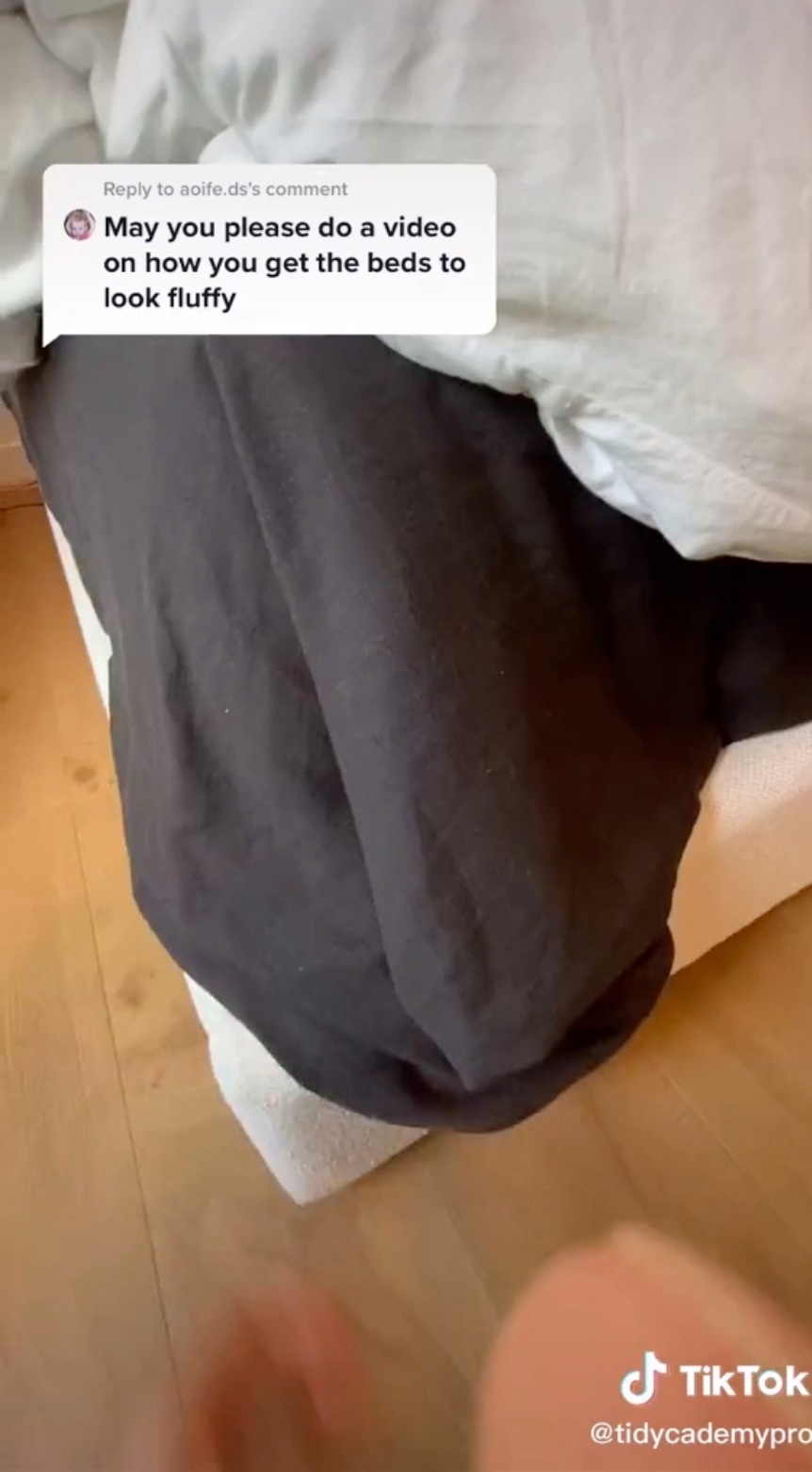 The other two duvets are then placed on top, and folded in half, so they look like a huge cloud covering just half the bed.

Folding the duvets so they only cover half the bed, she said, is “the key to making your bed look fluffy”.

She then added a vast array of pillows to the bed for extra impact.

She explained: “Now this bed has four regular pillows on it, four big white fluffy pillows, and two more big black pillows, and a lumbar pillow.

"So in total there’s eleven pillows on this bed.”

The clip has amassed over a million views, and opinion was totally divided among commenters. 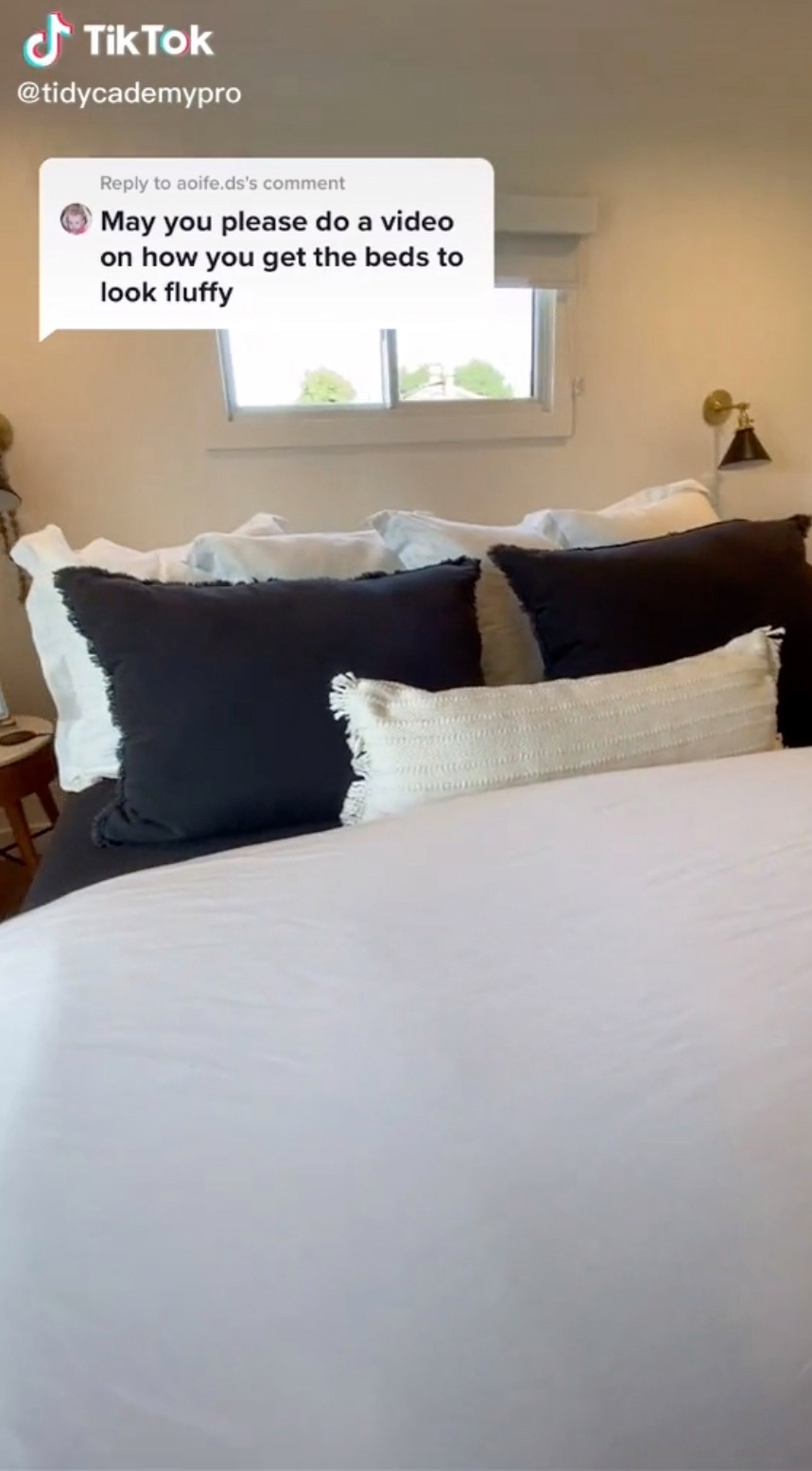 One commenter wrote: “This lady is insane. Three comforters on this bed and 11 pillows. Her entire personality is bed accessories. It’s way too much”, said one critical viewer.

“Lord. Then you have to do that every day?”, said another shocked viewer.

Others pointed out that several pillows would have to be removed before you could actually go to sleep.

“I would throw it all out when it’s time to go to bed”, one said.

Some, however, thought the technique was gorgeous.

“Oh I love it!”, said one viewer, and another wrote: “This is the fluffy bed of my dreams!”

For more cleaning and tidying hacks, this cleaning fanatic reveals how a LEMON can clean everything from your grubby oven to removing limescale from your shower.

Plus this mum’s simple trick stops bedsheets getting tangled in the dryer – all you need is some tennis balls.

On the topic of laundry, we’ve been washing our towels all wrong – here’s how you should really be cleaning them.