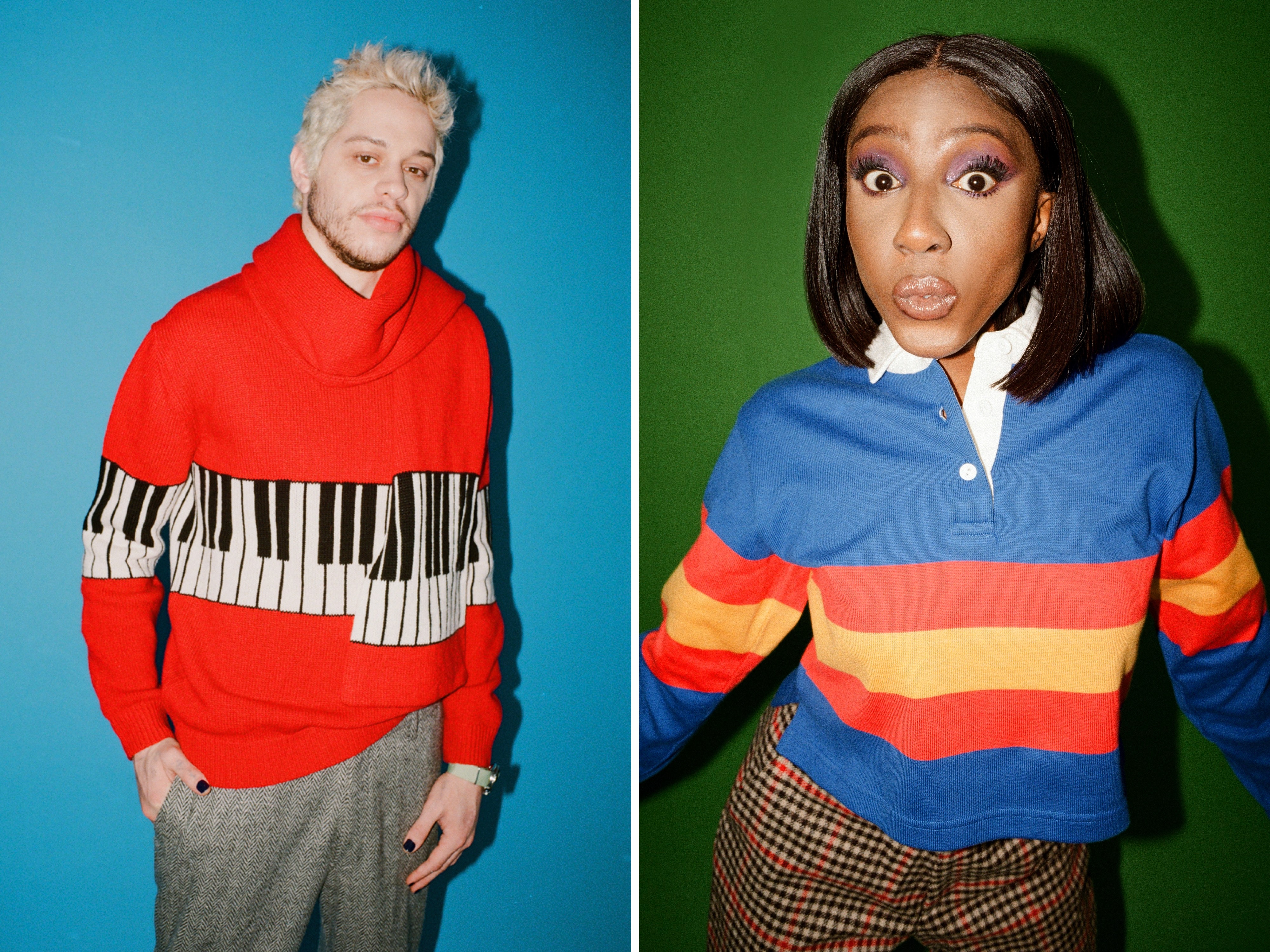 The latest unconventional season of New York Fashion Week proved that designers are getting back into their groove. For perhaps the first time amid the pandemic, the formats of the shows didn’t distract from their actual content—both the fall 2021 collections and the models who wore them. The most prominent of the latter was Ella Emhoff, who’s been keeping busy since signing with the mega agency IMG Models. The 21-year-old knitwear designer and stepdaughter of Vice President Kamala Harris made her runway debut at Proenza Schouler, followed up by her first-ever magazine cover. She was just one of the surprises to be found in this season’s runway shows, short films, and look books; the playwright Jeremy O. Harris and a total of three Saturday Night Live stars also put in appearances. Catch up on all of the cameos you may have missed, here.

New York knitwear brand Rowing Blazers hit us with a double whammy for their Fall/Winter 2021 collection: comedians Pete Davidson and Ziwe. The preppy streetwear label founder Jack Carlson was looking for something fun and humorous for his campaign, so he landed on a one-two punch of irreverent comedy by casting the performers. “People hear the word ‘classics’ and they think ‘stuffy.’ They hear ‘preppy’ and they think of something elitist and cringeworthy,” Carlson said in a statement. “They’re supposed to be about bright colors and beautiful fabrics, but more importantly: having fun, being yourself, and flipping the bird to anyone who takes themselves too seriously.”

More irreverent and humorous takes on the preppy classics courtesy of Ziwe, Pete Davidson, and their Rowing Blazers fits.

Writer and actor Tavi Gevinson was particularly excited to join the Coach crew, thanks to the brand’s choice of photographer. “Real Heads may remember that when I was wee I tore out Juergen Teller editorials from a bunch of issues of W and stapled them together until I could order his book,” she wrote on Instagram. “And then I wrote a long blog post complaining about how long it was taking for it to ship from Amazon.”

The irreverent London-based label Art School kicked off fashion week across the pond with the help of RuPaul’s Drag Race UK contestant A’Whora.

Ella Emhoff, whose mother is Vice President Kamala Harris, caused a stir when she made a surprise appearance at Proenza Schouler, just a month after signing to IMG.

Emhoff wasn’t the only scion in the cast. Meadow Walker, the daughter of the late actor Paul Walker, also made her runway debut.

Paris Hilton has been known to make occasional runway appearances, but her sister, Nicky Hilton, had rarely forayed into modeling before posing for Batsheva.

Saturday Night Live star Ego Nwodim kept it casual for Batsheva, with clutter and a toe band-aid on full display.

Designers seem to be tuning into SNL as of late: master of celebrity impressions Chloe Fineman also tried her hand at modeling for Christian Cowan.

Last but not least, one final SNL star: Bowen Yang sparkled in Christian Cowan’s look book, as well as alongside Fineman in the designer’s accompanying short film.

Maude Apatow paired one of Batsheva’s signature long dresses with Converse (and a cat).

Real Housewives of New York star Dorinda Medley was among those in Christian Cowan’s crew of “people of New York that make people fabulous.”

In a first for the fashion industry, the experimental label PH5—which previously collaborated with Sophia the Robot—created its very own CGI model and ambassador, AMA.