Home » Lifestyle » 2001: The year Howard drew a line in the sand and transformed Australia

2001: The year Howard drew a line in the sand and transformed Australia

John Howard’s government entered 2001 – the year it would face its third election – in decidedly ragged shape.

Voters were screaming about rising fuel prices, small business operators were furious at the complexity of the business activity statement (BAS) required under the new goods and services tax (GST), there was anger over the new tax being applied to beer and caravan parks, and self-funded retirees were unhappy over a superannuation surcharge.

Having scraped back into power in 1998 without winning a majority of votes, the Howard government’s chances of securing a third term at the general election due in 2001 were considered minimal at best. 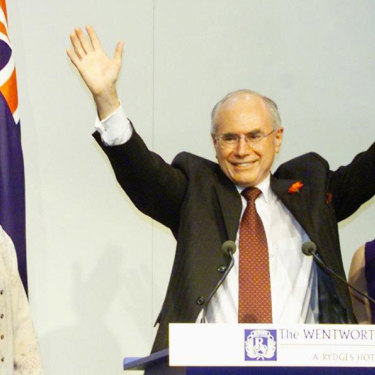 When Australia went to the polls on November 10, the Howard government was comfortably returned.Credit:Paul Harris

And yet, when Australia went to the polls on November 10, the Howard government was comfortably returned. The Labor opposition, led by Kim Beazley, suffered its lowest primary vote since 1934. It was perhaps the swiftest turnaround of political fortune in Australia’s history.

Howard transformed, presenting himself as the nation’s strong man, leaving Beazley battling the accusation that he was weak and vacillating.

It was the year Howard faced down international opprobrium when the MV Tampa arrived off Christmas Island, laden with rescued asylum seekers, and he sent Special Air Service troops to ensure none set foot on land.

His hard-line “Pacific Solution”, designed to deny asylum seekers passage to Australia, has essentially remained the approach of Australian governments, Coalition or Labor, ever since.

Howard was in Washington DC during the 9/11 terrorist attacks on the Twin Towers in New York and the Pentagon in the US capital. It moved him to take Australia into a war that lasted 20 years.

Last came the so-called children overboard affair, still considered one of the most cynical of election gambits.

As the election approached, Howard played each of these events into voter support for his government, and in doing so, radically altered Australia’s political culture in ways that resonate today.

But none of these developments could have been predicted as Howard battled stiff political headwinds for the first seven months of the year.

Early in the year, conservative administrations fell in Western Australia, the Northern Territory and Queensland, where Labor was installed in February after winning 66 seats, its biggest-ever haul in the state.

State politics can be dismissed as having little bearing on federal elections, but disaster followed for the federal Coalition government itself. A byelection on March 17 produced the Liberal Party’s first-ever failure to win the Queensland division of Ryan. It seemed to confirm doom awaited the Howard government.

Howard called the situation “clear-air turbulence” and embarked on a spectacular series of policy backflips and handouts to try to reverse the decline.

Days after the Ryan byelection, then treasurer Peter Costello announced the existing $7000 first home buyers’ scheme would be doubled to $14,000 until the end of the year.

The government abandoned plans to tax family trusts, BAS paperwork for the GST was streamlined, indexation of petrol was reduced by 1.5¢ a litre and the twice-a-year indexation of excise Labor had introduced in 1983 was axed. Caravan park residents received rent relief to compensate for the GST.

Costello’s May budget increased the tax-free threshold for self-funded retirees, and a one-off payment went to older voters to reduce the GST’s impact.

By the middle of the year, however, the Howard government’s reputation had suffered a serious blow from within.

A memo to Howard, written some months previously by Liberal Party president Shane Stone and leaked to Laurie Oakes of Nine News and The Bulletin, stated the government was seen as mean, tricky and out of touch.

Newspoll appeared to confirm the dire state of affairs, recording the government’s approval rating over the January to June period at 39 per cent to the ALP’s 45 per cent.

Amid all this, another byelection was required.

The seat of Aston in Melbourne’s south-eastern suburbs was up for grabs on July 14, after the death of sitting Liberal Peter Nugent. Against most predictions, the Liberals’ Chris Pearce won the seat, despite a swing of 3.66 per cent against the party.

‘I believe that the government is well and truly back in the game.’

Howard declared it the year’s turning point. “I believe that the government is well and truly back in the game,” he said on ABC TV’s Insiders program the morning after the byelection. “If there were an unstoppable momentum for Labor to win the federal election, they’d have rolled us over in Aston.”

Howard’s government was already embarrassed over widespread criticism of the conditions of asylum seekers kept in indefinite detention in Australia and was increasingly concerned about a spike in new arrivals: more than 5500 for the year. 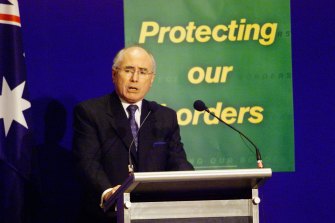 Howard denied permission for the Tampa to offload its rescued passengers and ordered SAS troops to board the ship when the Tampa’s Captain Arne Rinnan declared a state of emergency and steamed into Australian waters off Christmas Island.

Amid a diplomatic stand-off with Norway and criticism of Australia from other countries for failing its international obligations, then foreign minister Alexander Downer told Parliament that Australia “has no obligation under international law to accept the rescued persons into Australian territory”.

The government tried and failed to legislate a particularly draconian border protection bill. It would have provided the power to remove any foreign ship from Australian territorial waters, was backdated to cover the arrival of the Tampa, and would have meant no Australian court could review the actions or directions of an Australian military officer.

However, Labor subsequently supported the government in excising a number of islands and external territories from Australia’s migration zone, meaning asylum seekers had no automatic right to apply for refugee status if they arrived at those islands. 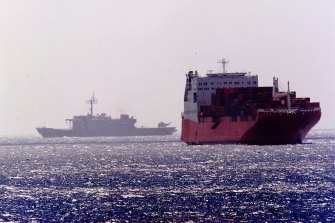 An Australian navy ship passes by the MV Tampa off Christmas Island in 2001.Credit:Craig Sillitoe

Beazley’s Labor Party also caved in eventually on other measures of Howard’s Pacific Solution that meant asylum seekers would be processed offshore in places such as Nauru and Manus Island.

Howard in return used Beazley’s ambivalence over the Pacific Solution as evidence he lacked the “ticker” to be prime minister.

Shortly afterwards, Howard flew to the US to meet then president George W. Bush as part of the 50th anniversary of the ANZUS Treaty.

As he gave a press conference in his hotel in Washington DC on September 11, one of the jets hijacked by terrorists smashed into the Pentagon, visible from his room.

The following day, Howard and his party were the only visitors in the US House of Representatives as it held an emergency debate on the tragedy. He received a standing ovation. 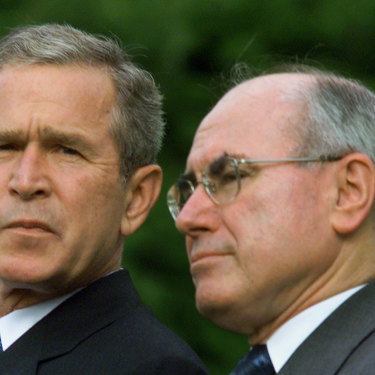 George W. Bush with John Howard in Washington DC on the eve of the September 11, 2001 attacks. Credit:Getty

Flying back to Australia, Howard resolved to invoke the ANZUS Treaty for the first time, committing Australia to support the US in whatever action it chose to avenge the attacks.

And so, with the decision to join the fight against the Taliban in Afghanistan, Howard became a wartime leader. Bush named him a “man of steel”. The war, Australia’s longest, would end in humiliation in mid-2021 when the Taliban took back control.

The election had morphed into a referendum on national security. Howard and his ministers ensured border security and anti-terrorism policies consumed the debate.

Finally, just a day before the election campaign began, then immigration minister Philip Ruddock announced sensationally that asylum seekers on a boat intercepted by an Australian naval vessel, HMAS Adelaide, had threatened to throw their children overboard.

Defence minister Peter Reith and Howard himself repeated the claim. Photos purporting to prove the allegation were circulated.

The truth was not revealed until long after the election. A Senate select committee found no children had been at risk of being thrown overboard and that the government had known this before the election. The photos, it turned out, were taken during a rescue after the boat sank.

Howard simply increased his efforts to hammer border security during the election campaign.

At the Liberal Party’s official election campaign launch in Sydney on October 28, Howard almost brought down the roof when he uttered the sentence that most characterised the transformation of his leadership.

“We will decide who comes to this country and the circumstances in which they come,” he thundered.

If the confrontation with the Tampa was his line in the sand, this was the slogan that would define the remaining years of Howard’s prime ministership.

On November 11, the government that couldn’t win a trick at the start of the year won 82 seats in the House of Representatives to Labor’s 65.

After the election, Beazley stepped down as Labor leader and was replaced by Simon Crean.

Howard went on to win another election in 2004, and finally to lose government and his own seat in 2007.