Home » Lifestyle » A chef discovers her wild side hunting, fishing and foraging in Tassie

A chef discovers her wild side hunting, fishing and foraging in Tassie

Your show – A Girl’s Guide to Hunting, Fishing and Wild Cooking – involves you completely changing your entire lifestyle.
That’s right, it’s a big, I don’t know … tree change, I suppose.

Given your distinguished and blossoming career, did it feel like a risk to move from the glamorous culinary life to going country in Tasmania?
It did, it felt like a huge risk, but when there’s something you want to do … I kind of toyed with the idea for a couple of years but it was like, “Oh no, it won’t work,” and you find all these reasons not to do it. So, I finally just took the leap and went for it.

In terms of the skills needed for your new lifestyle, was there any of that in your past or did you have to learn it all from scratch?
I mean, I’m good with knives but, apart from that, I had to learn it all. 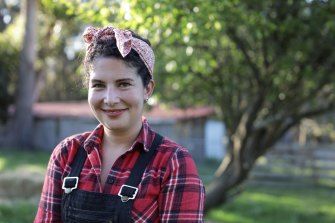 You weren’t a hunter or a fisher?
No, occasionally on a holiday every couple of years, but apart from that. It’s been a big time of upskilling for me.

Do you think most chefs could do with a bit of time out in the wilderness?
I think it depends on the person. Amongst my group of chef friends, not everyone is interested. Sometimes I’m like, “Come to this farm with me!” and they’re like, “Oh no, I’m just gonna stay in town and test recipes.” But my anxiety was thriving [while] cooking in Sydney, and so it was also partially for that. But I felt like whenever I cooked in the countryside, like when I worked in countryside France, I was a little bit more relaxed, a little bit more chilled, just a little bit more in touch with the world, I suppose.

Is it true that back in the day you went out and ran a pop-up restaurant in the Moroccan desert?
It was Fes, a town in the north, so not quite in the desert, but, yes, in the less well-trodden parts of Morocco.

You do seem to have a thirst for adventure, even before your current endeavour. Are you always lusting after new experiences?
Yes. I put that down to being from New Zealand – it may not be because of that, just a kind of wanderlust and thirst for new things and novelty.

New Zealanders and Australians have a bit of that in common – the further away you feel from the rest of the world, the more you feel the need to go out and see it.
That’s true, and it took me quite a few years to return to this side of the world and be like, “Oh there’s lots to see here too!”

You pursued a career in food from a young age: did you think that it would lead to TV, or was that unexpected?
That was very unexpected. Laurie (Critchley), a TV producer who wound up making the show, turned up one day when I was cooking at Franklin and was like, “Oh, have you ever considered making a show?” And I was like, “No, can’t say I have.” And here we are!

Since you took the plunge to head into the Tasmanian wilds, what’s surprised you the most about your new life?
I suppose it’s part of just being in Tassie. Maybe it’s because it’s a small community, maybe it’s because it’s Tasmania, one adventure leads to another and the more people you meet, it all happens quite naturally. I go wallaby hunting with Richard, a wallaby hunter on Bruny Island, and one day I was out fishing with some guys I met at the pub and they were like, oh do you use wallaby in the restaurant, you should go meet this guy, gave me his phone number, and the next weekend I was out wallaby hunting with him. Just the way those connections seem to happen so naturally.

What’s the best way to cook a wallaby?
Good question. In the beginning I didn’t cook them at all, because I kind of likened it to really rare beef or venison. I was trying to serve it to everyone raw to start with, and it’s only recently – actually since doing the show with Gordon Ramsay, and I did a raw wallaby dish and he did a cooked wallaby, and his dish was way better than mine – that I was like, “Oh maybe I should start roasting it, this is a good way!”

I have eaten kangaroo, but never wallaby.
Wallaby’s heaps better.

A Girl’s Guide to Hunting, Fishing and Wild Cooking is on SBS Food, Thursday, November 18, 8:30pm.

a, Chef, discovers, her, Side, wild
World News