"Some people live in fear of magpies, and I'm sorry for that," says Deborah Cheetham, soprano and composer. "But they sing, and sing to you. And that carolling is the most glorious thing."

In between pandemic lockdowns, Cheetham was in Port Fairy on the Great Ocean Road, working on her second opera which will premiere next year for Victorian Opera. Called Parrwang Lifts the Sky, it tells a story from Wadawurrung Country west of Melbourne, of the magpie who lifted the great blanket of darkness from the land and created the first dawn.

And while Cheetham worked, in a little rental overlooking the sea, a family of magpies would come every morning and serenade her. "I couldn't have wished for a better place to be writing this opera," she says. 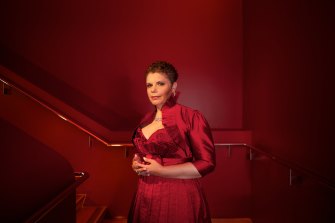 Parrwang is the first new production announced for VO's return in 2021, after a heavily truncated 2020 season, and is due to premiere in June. The announcement comes on the company's 15th anniversary and is accompanied by a new award: a $50,000 opera prize for emerging singers that includes professional work and private mentorship.

VO artistic director Richard Mills says the symbolism of a dawn story, in a year when the performing arts will (it is hoped) be reborn from a dark, painful 2020, is a welcome coincidence.

Mills says he wanted Cheetham to write a piece "steeped in her own culture, and the Wadawurrung language, and the stories in the country around Melbourne". The production will be part of the company's school program, livestreamed to thousands of primary and secondary students statewide.

"I thought it would be really beautiful for the young people of Melbourne to see a First Nations creation story, sung by a largely indigenous cast to point out the richness of First Nations culture that we're living in," Mills says.

The great opera canon has enduring value but, Mills says, if opera does not grow, change and speak to its society "it will become a total museum".

Cheetham says she is trying to break through "this premise that classical music is not relevant for First Nations people".

Some people live in fear of magpies, and I'm sorry for that. But they sing, and sing to you. And that carolling is the most glorious thing.

"Of course it is, all music is," she says. "As a First Nations composer I have a duty of care around the telling of stories that are of important cultural significance, and opera is the ultimate vehicle for that. It represents in the fullest sense the way the arts were embedded into indigenous cultures: the singer was also the painter, and the painter the dancer, and the dancer the storyteller."

For her first opera, 2010's Pecan Summer, Cheetham sought out a colleague to help her orchestrate the score; this opera is all her own work. For a "reveal moment" it will be sung in the Wadawurrung language.

Cheetham says she felt drawn to the story of the dawn.

"That symbolises an awakening," she says. "When I allow myself to imagine what next year will be like, when we reemerge from this chaos, the opportunity and the possibilities that brings: that sustains me. It brings hope.

"But we can't just re-emerge from this without considering what it is that maybe kept us in darkness. The dawn is a story of moving from ignorance to understanding. And that is a journey all Australia is on right now.

"My Aboriginal grandparents lived with permits and curfews for decades, not weeks. And here I am… Never did I fully understand that, in my bones, in my spirit, until I experienced a tiny sliver of that deprivation.

"There's an opportunity for Victorians to say we went through this hideous thing… now what do we do? Do we move from knowing about it, to understanding it?

"That's this beautiful story, of Parrwang deciding to lift the blanket of the sky."