Aaron Tveit & Dove Cameron play two of the zany inhabitants of the Golden Era musical-inspired town of Schmigadoon! The pair spoke to HL about the new show.

While you’re used to seeing Aaron Tveit and his singing talents on the Broadway stage, the Tony winner has now brought them to the small screen in Apple TV+’s new musical comedy series, Schmigadoon! The Moulin Rouge: The Musical star and the ultra-talented Dove Cameron star as two of the outlandish town people in the magical, musical land of Schmigadoon. “This is this is me getting to kind of live out all my dreams of playing Billy Bigelow in Carousel,” Aaron told HollywoodLife.com of his whimsical, bad boy character of Danny Bailey. “I never got to play that role, but it’s always been one of my favorite movies and musicals, so the idea I had for myself, I got to bring forward and poured into this, which was really, really cool.”

Dove, who takes on the role of the town seductress, Betsy McDonough, spoke about her character’s “knowing sexuality” as she tries to tempt town newcomer, Josh. “There’s this question that’s like, ‘Does she know what she’s doing?’ Or is this entirely innocent? And is just this is just her nature?” the Descendants star explained. “Betsy represents a certain ‘male fantasy’ for Josh, where she’s like, ‘I just love you and only you’ and she’s so wide-eyed and inherently sexual…She’s the classic temptress.” 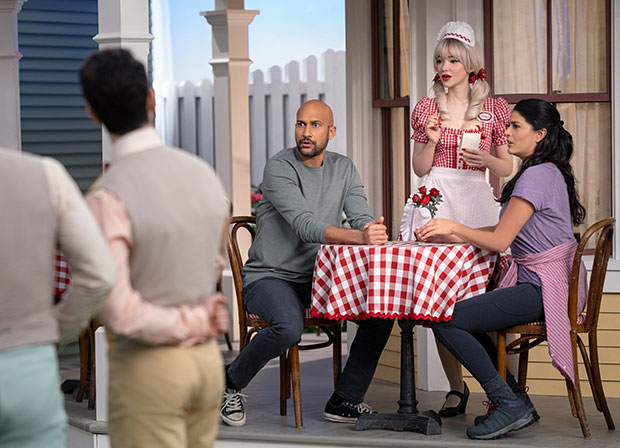 In the Lorne Michaels produced series, a struggling couple from NYC, Josh (Keegan-Michael Key) and Melissa (Cecily Strong), stumble into the land of Schmigadoon, and before long realize they’re trapped in a 1940s, Golden Age musical. The couple cannot leave until they find true love, which, upon arrival, is not with each other.

“On the outside, it looks like it’s just this fun and joyous show, but there’s actually a real important messaging within it,” Aaron said. “Both of our characters are people that are very traditional and very set in their ways, meet these very contemporary, progressive people. And both of them are changed for the better from knowing each other.” 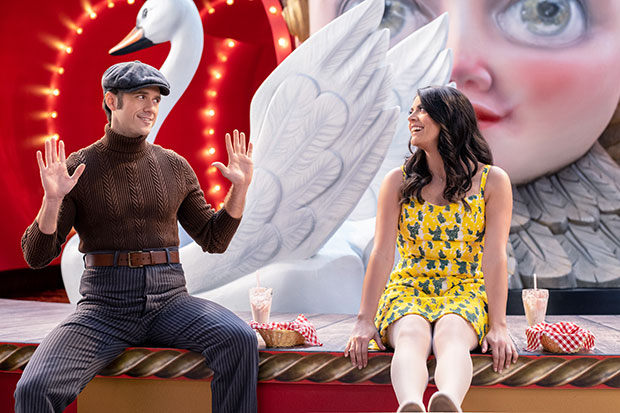 Schmigadoon!, which hits Apple TV+ on July 16th, was filmed from October to December, one of the early productions to get to work during the pandemic. “It was pretty special. I think we were all very grateful for what was happening. I mean, five or six months into the world stopping and, especially talking about theater and musical theater, an industry that still has been decimated — the fact that once we got through the protocols and our masks came off, we got to make a musical together, it put it into perspective how lucky we were to be telling this story,” Aaron recalled. Dove added she “couldn’t have said it better” herself.