Gimme gimme gimme more! The Abbatars will take you on a magical trip back to the 70s in the electric and soul-touching ABBA Voyage

When Abba made a comeback album last year, it was as though they had never been away. We’d had the musical, the museum, the endless tribute bands, the film of the musical and the sequel to the film.

Their greatest-hits collection, Abba Gold, had been in the charts for a thousand weeks. But there was one thing missing: for 40 years, there had been not a single Abba concert.

While their fellow veterans made a fortune by keeping the show on the road, Benny, Bjorn, Agnetha and Frida turned down $1 billion to reunite on stage. Now, they have finally done it – on their own terms. 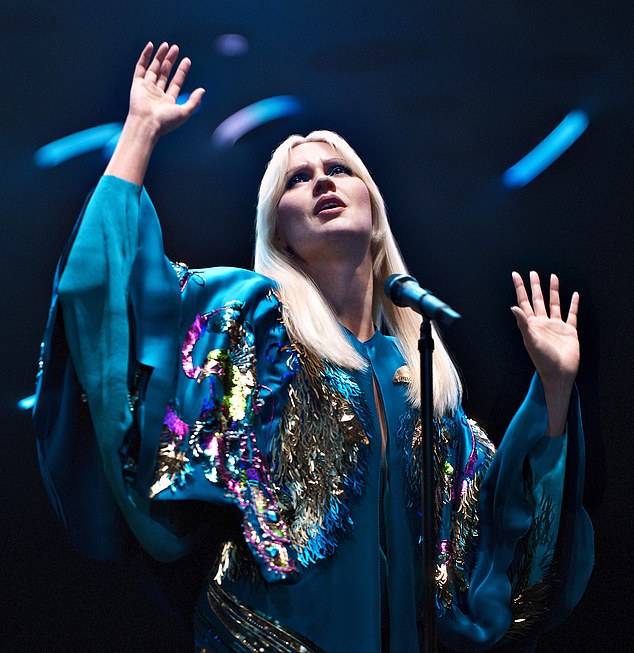 When Abba made a comeback album last year, it was as though they had never been away. Above: Agnetha’s Abbatar

They have built a brand new arena, accommodating 3,000 people, big enough to be exciting, small enough to feel intimate. They have invested £140 million and five years’ work into the show. They have recouped some of that by selling 380,000 tickets so far.

And they have hired George Lucas’s special-effects company to lay on scintillating lights, immaculate sound, and digital versions of their younger selves, inevitably known as the Abbatars.

On opening night the atmosphere is electric.

The crowd is evenly divided between British celebrities – Jarvis Cocker here, Sophie Ellis-Bextor there – and Scandinavian septuagenarians. One of them is sitting in the row behind me: the King of Sweden, Carl XVI Gustaf. There’s a lovely moment at the end of the first song when Agnetha and Frida (Abbatar above), who have come on wearing capes, take them off and toss them into the wings

For all the razzamatazz, the show will stand or fall on one thing. Will the Abbatars be up to it? Or will they be just too weird and ghostly, like the hologram of Roy Orbison that shimmered round the arenas in 2018?

The answer is that they are as good as they can possibly be. They’re about 80 per cent realistic, 20 per cent Madame Tussauds.

The hair is sensational but the skin is a bit waxy, which means that Benny is the most believable – because his face is largely covered by his beard.

There’s a lovely moment at the end of the first song when Agnetha and Frida, who have come on wearing capes, take them off and toss them into the wings. 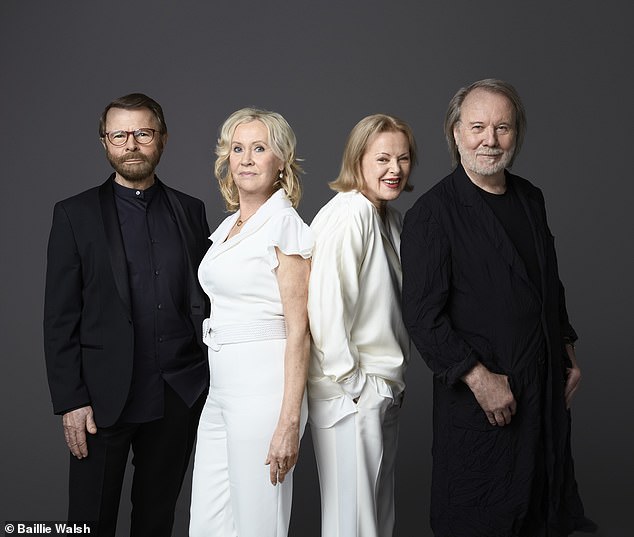 It helps that all the members of Abba (above) are still alive and, for this first night, actually in the building

The movement is spot-on: the technology has come on in leaps and bounds since Orbison’s effort.

It helps that all the members of Abba are still alive and, for this first night, actually in the building (Frida, like the Queen, now walking with a stick). When each Abbatar makes a little speech, it’s a real person talking.

The men crack little jokes, while the women speak from the heart.

It helps that the costumes, by Dolce & Gabbana among others, are superb. They’re very Abba and very 70s, all sparkle and glitz, but it’s the 70s as seen from the 2020s – far more elegant than the real thing.

Sales of velvet jumpsuits, in burgundy and forest-green, are about to go through the roof.

Above all, it helps that the Abbatars have Abba’s songs played by a dynamic ten-piece band.

After a slow start, the evening turns into a cascade of classics. There’s pinpoint pop in S.O.S., bittersweet drama in Knowing Me, Knowing You, delicious disco in Gimme! Gimme! Gimme! (A Man After Midnight), mellow warmth in I Still Have Faith In You, beautiful sadness in The Winner Takes It All, and all of this rolled into one in Dancing Queen.

It’s not just that the Abbatars move well. It’s that, most unexpectedly, they move you. These songs are in our bones: we know them all by heart.

Every time we hear them, we are tuning into the past as well as the present, which is what makes this Voyage, with its swirl of time travel, touch the soul.