Federal police warned the Coalition government in writing that then-Nationals MP George Christensen had “engaged in activities” in South East Asia that placed him at risk of being compromised by foreign interests.

In the letter, which the AFP and Christensen have repeatedly fought to keep secret, police said a nine-month probe into Christensen’s frequent travel to the region had found no evidence of criminal conduct, but he was a potential risk of compromise. 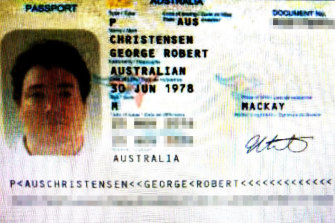 A copy of George Christensen’s passport, which was captured on his regular visits to South East Asia.Credit:

Nine News, The Sydney Morning Herald and The Age have sought to obtain the letter under Freedom of Information laws for three years, but the AFP refused on national security and privacy grounds. The AFP was forced to release the document on Tuesday after a final decision by the Information Commissioner found its disclosure was in the public interest.

The Queensland politician, who left politics at the May election after defecting from the Nationals to One Nation and placing himself in an unwinnable spot on the party’s Senate ticket, made three secret submissions to the information watchdog in a bid to prevent the AFP’s letter from being made public.

Christensen was dubbed the “Member for Manila” by colleagues after it emerged he had taken at least 28 trips to the Philippines, spending almost 300 days in the country, between 2014 and 2018.

The visits included frequent trips to Angeles City, more than 80km north of the capital Manila, which is known for its red-light district.

According to multiple Coalition sources, Christensen also spent a considerable amount of time in Thailand during the same period.

“The AFP has completed a thorough assessment in relation to this matter, with no criminal conduct on the part of Mr Christensen being identified,” the letter states.

“The assessment did reveal, however, that Mr Christensen undertakes extensive international travel to South East Asia during non-sitting periods and has engaged in activities that could potentially place him at risk of being targeted for compromise by foreign interests.”

“On 24 May 2018 the AFP met with Mr Christensen and informed him of the potential risk of compromise.”

The letter did not go into detail about the nature of Christensen’s alleged “activities” in South East Asia.

This masthead has previously reported that a staff member at an adult entertainment bar in Angeles City claimed Christensen was a regular at the venue.

At the height of the AFP’s probe, Dutton and then-prime minister Malcolm Turnbull discussed the prospect of disendorsing Christensen before the 2019 election, according to multiple Liberal sources. But the matter was complicated by the fact that Christensen was a Nationals MP.

Christensen, who has a Filipina wife, has attacked media coverage of his visits to the Philippines as a “vile smear” and insisted he did nothing wrong.

Asked last year why he was fighting the release of the document, Christensen said: “I am not happy with documents that basically falsely accuse me of a serious crime being made public because therefore people will get to then report what you are falsely accused of and that’s just wrong for anyone”.

Former prime minister Malcolm Turnbull, former deputy prime minister Michael McCormack, Dutton and Nationals Leader Barnaby Joyce were all briefed on the probe at least once by the AFP.

In her decision handed down on June 30 this year, Information Commissioner Angelene Falk rejected the AFP’s submissions that the release of the document was an unreasonable disclosure of Christensen’s personal information, saying personal privacy considerations were outweighed by the public interest.

“I am persuaded that a public purpose would be served through the release of the document by increasing scrutiny, discussion, comment and review of government’s activities in accordance with … the FOI Act,” Falk said in her decision. “I am satisfied that disclosure would not be unreasonable in this case.”

The AFP also argued the release of the letter would damage the security of the Commonwealth and have a “substantial adverse effect” on its operations by compromising the “provision of frank and candid briefings to the minister of home affairs in relation to sensitive matters”.

But after inspecting the document, Falk said she was “not satisfied that the AFP has discharged its onus” in establishing that the document’s release would adversely affect its operations.