Mandatory aged care worker registration has been removed from federal government legislation to reform the troubled sector, delaying the change until next year as unions and providers argue over details of the scheme.

Opposition health spokeswoman Anne Ruston said the government had “capitulated to the unions” by removing the schedule on worker screening from a bill originally drafted by the former Coalition government and rewritten to be introduced as a key Labor reform. 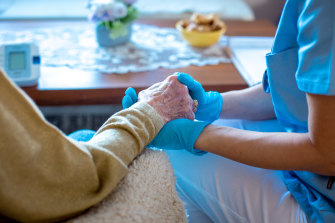 A key measure in the original bill that would have required all aged care workers to be registered has been removed.Credit:iStock

“It is absolutely essential that the government stands up to the unions and implements good policies to protect both our aged care residents and care sector workforce,” Ruston said.

The Senate on Monday began debating the Aged Care and Other Legislation Amendment (Royal Commission Response) Bill 2022, which is almost identical to the previous government’s bill to set up a new funding model and the first stage of minimum staffing.

But a key measure in the original bill that would have required all aged care workers to be registered has been removed. Instead, the government plans to include worker registration in a new aged care act to be introduced into parliament next year.

Health Services Union NSW secretary Gerard Hayes said while the union supported the registration of workers, it should not be seen as a “punitive” measure and workers must not be expected to bear the cost of registration.

A system under which workers could be banned from the sector would discourage people from coming to work in aged care, he said.

“We support registration that would encourage and promote training and enhancement of skills,” Hayes said.

The HSU argued in its submission to a Senate inquiry examining the former government’s bill that banning orders were “likely to cause serious financial and reputational harm to an individual” and constituted “serious and extensive” powers.

“HSU is opposed to exclusion and individual blacklisting as a default,” the submission said. “We advocate for a regulatory authority that is empowered to consider individual worker actions and organisational practices and systemic issues.”

“Interaction with nursing and allied health registration and interface with the NDIS registration process need to be resolved,” he said. “We need to take time to support personal care staff to get prepared for a transition to a registration model.”

The bill also contains a provision that will give aged care providers immunity from prosecution for using physical and chemical restraints. The government will release an exposure draft of the quality of care principles that will guide the consent process for restrictive practices in the coming weeks.

The Greens have tabled an amendment seeking to delete this provision but it is not expected to succeed.

Aged Care Reform Now’s Sarah Russell, who unsuccessfully ran as an independent in the seat of Flinders at the federal election, said the Albanese government “will be remembered as the one that stripped many older Australians of their fundamental legal and human rights” if the bill passed unamended.

Joseph Ibrahim, a geriatrician and head of Monash University’s health law and ageing research unit, said workforce registration was a complex area and would cost money to set up and run.

“It’s a key step towards strengthening the workforce capability, training and being able to ensure we have workers with the skill sets required for the care required in a contemporary system,” he said.

“The worker registration is only the first step – in and of itself, it is not enough. Setting a minimum standard and stipulating the qualifications needed for workers is part of this concept, which creates pressure to improve pay and access to formal training.”