Labor leader Anthony Albanese will head to Perth on Friday night after coming out of isolation but has been told by his doctor to take it easy for the first few days.

Albanese has told colleagues he is feeling well after contracting COVID-19 last week and is ready to make up for the lost week. 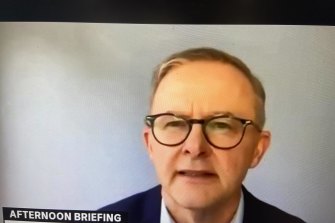 Anthony Albanese Albanese has participated in a number of television and radio interviews while in isolation.

Albanese will fly to Perth on Friday night and headline Labor’s campaign launch in the city on Sunday, but it is unclear whether he will immediately hit the hustings in Sydney on Friday.

Labor officials are also still weighing up whether to agree to a debate hosted by Nine News and The Sydney Morning Herald and The Age, wanting to see whether their leader has completely recovered from the virus.

Labor’s campaign spokesman, Jason Clare, said the campaign launch was “going to be a key moment in this campaign, a fantastic opportunity for Albo and the whole team to make the case to the Australian people”.

Asked on Friday whether he was feeling OK, Albanese – who is due to get out of isolation on Thursday night – said: “Yeah, I am.”

“It’s been a difficult week, but my symptoms have been much milder than many other people have had, so I am looking forward to getting out,” he told Sydney radio station WSFM.

“My doctor tells me I have to take things easy, particularly in the first few days to not do the 16- and 20-hour days that I was doing. But it will be good to be out and about and the first thing I’m doing is heading to Western Australia where we have our campaign launch this Sunday.”

Albanese said he was “shocked” when he received the text message from NSW health authorities informing him his PCR result was positive last Thursday.

“It was the day after the [April 20] debate and I’d had a win in the first debate with Scott Morrison and I’d been busy,” he said. “I felt fine. I got a routine test because I was travelling to Perth the next day and I tested positive and then the symptoms started to appear the next day.”

Morrison said on Friday he was “pleased” Albanese had recovered from COVID-19 but accused him of having a relatively quiet week in isolation.

“I’m looking forward to him rejoining the campaign. He’s had a pretty quiet week. I remember when I was in iso I had a very busy week,” Morrison said.

Albanese has participated in a number of television and radio interviews while in isolation, while senior ministers such as Clare, Kristina Keneally, Richard Marles and Katy Gallagher have taken the reins of the Labor campaign.

Morrison has agreed to the debate put forward by Nine, the Herald and The Age, which would air during the usual 60 Minutes timeslot on Sunday night to ensure a large audience.

The prime minister accepted the proposal on Wednesday but Albanese is yet to decide if he will back the event. At least three other debates are being suggested across the major television networks.

Labor responded on Thursday morning with a proposal for a debate at the National Press Club in the final week of the campaign.