Federal Labor leader Anthony Albanese has launched a presidential-style pitch for Queensland votes in the party’s most marginal state seat ahead of a federal election expected to be called within days.

Mr Albanese arrived at the pre-campaign rally, held at the Kedron-Wavell Services Club in Chermside on Brisbane’s north, to “Albo 2022” signs and a sea of red T-shirts worn by about 350 of the party faithful. 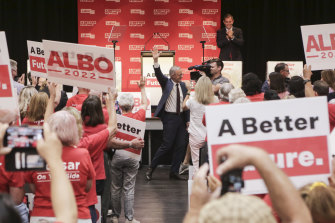 Labor has rolled out messaging centring leader Anthony Albanese in its pitch to Queensland voters, at a pre-campaign rally in Brisbane on Sunday.Credit:Matt Dennien

Brisbane-based frontbenchers Terri Butler and Jim Chalmers then introduced him to the crowd, gathered in the Labor seat of Lilley — held by Anika Wells on a margin of just 0.64 per cent — as an “honorary Queenslander”.

“I know we need a better government,” Mr Albanese told the room, in a venue he had visited just weeks prior while set up as a flood evacuation centre. “And I know we need Queensland to help deliver it.”

Both Mr Albanese and Prime Minister Scott Morrison have already put in months of quasi-campaign days in the state, considered a key piece of the federal electoral puzzle.

The ALP holds just six of Queensland’s 30 federal seats, most around the populated south-east corner. When Brisbane-based Kevin Rudd swept to power on his “Kevin ’07” campaign, the party won nine seats off the Coalition in Queensland alone.

Echoes of that effort were apparent in Mr Albanese’s new red and white slogan corflutes, and the US presidential-style focus on a leader Queensland voters themselves will not see on a ballot paper.

An approach similar to Premier Annastacia Palaszczuk’s 2020 re-election effort — in which the still then relatively newly minted federal leader did not make an appearance.

The pair were expected to have at least one shared appearance in coming days, a government source said. Labor is hopeful of winning two or three Queensland seats at the poll, including Longman, Flynn and Leichardt.

The LNP has suffered an early setback in Lilley, with army veteran Ryan Shaw pulling out of the race in late February after almost 10-months of campaigning. He was replaced this week by higher-education director Vivian Lobo.

He also reiterated the party’s already-announced policies around childcare and spruiked its plans for health and Medicare, “because we care”.

“On the morning after the election, I believe that we can begin a better future,” Mr Albanese said. “The better future all Australians deserve but after a tough few years — for some, the hardest years of their lives.”

Ms Wells later took to the stage, imploring supporters to join campaigning efforts in the electorate after a 2019 result in the “proud, resistant island of red in a sea of blue” that was won by little more than 1200 votes.

“Just like Queensland Labor has, it is time to make that sea red from Coolangatta right up to the Cape,” she said. “We Queenslanders are used to carrying the hopes of Australian Labor on our shoulders.”

The Morning Edition newsletter is your guide to the day’s most important and interesting stories, analysis and insights. Sign up here.