Alice M. Rivlin, who had a guiding hand in national economic affairs for decades, playing a foundational role with the Congressional Budget Office and serving as budget director, a cabinet-level post, under President Bill Clinton, died on Tuesday at her home in Washington. She was 88.

The Brookings Institution, the Washington think tank with which she was long affiliated, announced her death.

Ms. Rivlin spent much of her career bouncing back and forth between Brookings and top government posts, among them vice chairwoman of the Federal Reserve Board under Alan Greenspan.

In yet another incarnation, she volunteered to help nurse the near-bankrupt District of Columbia government back to health in the 1990s by running its Financial Management Assistance Authority. In that post she was said to wield more operational power than the mayor and the City Council combined.

But it was her tenure as the founding director of the Congressional Budget Office, whose creation she had advocated, that established her as one of Washington’s most influential economists.

She was widely credited with shaping the C.B.O. into an authoritative and nonpartisan fiscal analyst, the first to provide Congress with reliable and impartial data on the fiscal consequences of a broad range of proposed legislation.

“I think it’s the biggest contribution I made,’’ Ms. Rivlin said in an interview for this obituary in 2008, noting that she had insisted that its work be limited to analysis. “The most important decision I made was that we would not make recommendations.”

She and her staff, which swelled to 225, were nonetheless repeatedly challenged along partisan lines as electoral tides shifted. Reagan administration officials, for example, complained that her conventional estimation models did not reflect the virtues, as they saw them, of supply-side economics, which argued that lowering taxes and cutting regulations would spur economic growth.

On another occasion, she disparaged a Clinton administration deficit-reduction idea as a “display device.”

Ms. Rivlin came to regard complaints from politicians of all stripes as the inevitable price of being what she called a “professional critic of wishful thinking.”

An enrolled Democrat, Ms. Rivlin said she often saw herself more as a liberal Republican. In her book “Reviving the American Dream: The Economy, the States & the Federal Government” (1992), in which she argued that deficits were the biggest impediment to economic growth, she called herself “a fanatical, card-carrying middle-of-the-roader.’’ 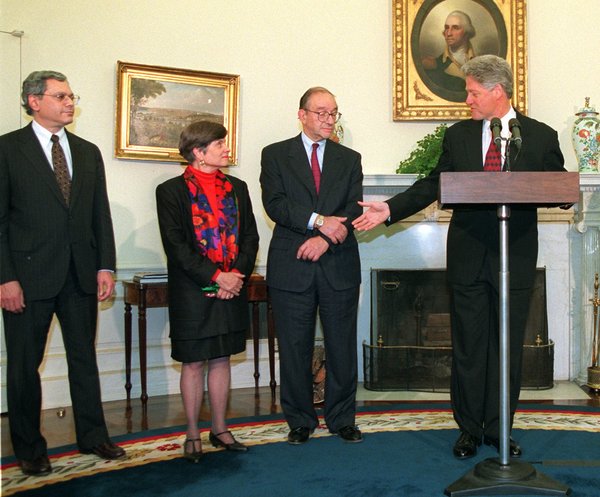 In 1971, she took a leave from Brookings at the urging of her friend Meg Greenfield, the deputy editorial page editor of The Washington Post at the time, to write editorials for the newspaper, replacing a staff member who had suddenly left.

In subsequent decades she wrote a regular column for The Los Angeles Times and turned out a prodigious number of op-ed articles as well as policy papers for Brookings.

Ms. Rivlin could be unequivocal in her opinions. She once approvingly quoted a critic who called Fannie Mae and Freddie Mac — the publicly sponsored but privately owned mortgage giants now largely controlled by the government — examples of “the most deceitful socialism I know.”

She was born Georgianna Alice Mitchell (called Georgie Alice as a girl, she later preferred to go by Alice) on March 4, 1931, in Philadelphia and grew up mainly in Bloomington, Ind., where her father, Allan C. G. Rivlin, headed the Indiana University physics department. He had worked on developing the atomic bomb as part of the Manhattan Project. Her mother, Georgianna (Fales) Rivlin, was a national officer of the League of Women Voters.

While a student at Bryn Mawr College in Pennsylvania, where she had intended to study history, Ms. Rivlin was inspired by a summer economics course in Bloomington that redirected her ambitions. Then came graduate work at Harvard; marriage to Lewis A. Rivlin, a lawyer; and a move to Washington, where she had won a Brookings fellowship to finish a difficult Ph.D. dissertation on projecting demographic trends, for which she had to rely on rudimentary computer punch cards.

After a brief stint on Capitol Hill at the request of Representative Adam Clayton Powell Jr., the New York Democrat, who headed a select committee on education and labor, Ms. Rivlin was summoned by President Lyndon B. Johnson to the Department of Health, Education and Welfare.

There, as assistant secretary for planning and evaluation, she was part of an administration-wide effort to replicate management techniques that had been brought to Washington from the Ford Motor Company by Robert S. McNamara, the defense secretary who served under both Johnson and John F. Kennedy. Mr. McNamara had been president of Ford.

Her appointment to head the newly created Congressional Budget Office in 1975 shoved the soft-spoken, 5-foot-2-inch Ms. Rivlin into the political limelight.

She dined out for years on the tale of her selection. The Senate and the House had each formed committees to select a chief for the budget office, and the Senate panel chose Ms. Rivlin. But another candidate was favored by the House, where Representative Al Ullman, an Oregon Democrat who was chairman of the Budget Committee, was outspokenly opposed to picking a woman.

After months of stalemate, Ms. Rivlin’s fortunes unexpectedly changed when Wilbur D. Mills, the Arkansas Democrat who headed the House Ways and Means Committee, was forced to resign after a highly publicized incident involving alcohol consumption and an Argentine stripper. (She had fled his car and wound up in the Tidal Basin.) Mr. Ullman took Mr. Mills’s post, and his successor on the Budget Committee acceded to the Senate’s choice of Ms. Rivlin. She later liked to say that she owed her job in part to Fanne Foxe, the stripper.

Ms. Rivlin immediately met resistance in setting up the budget office. To the barons of the appropriations committees, which had long dominated the legislative budget process, the office seemed to threaten their power. But over time she built respect for it on Capitol Hill.

Ms. Rivlin earned high marks for her ability to analyze the economy and work with Republicans and Democrats alike. She also earned respect for telling committee chairmen that budget constraints would not allow them to build every last pork-barrel project.

After another stint at Brookings, she became a candidate for director of the Office of Management and Budget in the Clinton administration. When Leon Panetta was chosen instead, Ms. Rivlin accepted the No. 2 post.

An article in The New York Times in 1994 described her as “a numbers-cruncher-in-chief while Mr. Panetta did a lot of the political work.”

She succeeded to the top job when Mr. Panetta took over as White House chief of staff, and she served from 1994 to 1996.

A career-long hawk on the federal deficit, Ms. Rivlin took pride in helping to set the stage for four straight years of budget surplus in the late ’90s, the first federal black ink in nearly 30 years. By then she had moved on to the Federal Reserve.

After turning down previous Fed offers — considering herself a fiscal and not a monetary specialist — Mrs. Rivlin finally accepted the No. 2 post there in 1996 and became the governor charged with administration and the payments process. “I loved the Fed,’’ she later said. Her term ended in 1999.

Ms. Rivlin had earlier served as president of the American Economic Association and as a professor of public policy at George Mason University. In 1983 she won a MacArthur Foundation fellowship.

For much of her life she was an avid hiker, in the Himalayas, South America, Europe and the American West, frequently with her friend Donna E. Shalala, a former cabinet colleague and now a congresswoman from Florida.

Ms. Rivlin retained her married name after she and Mr. Rivlin divorced in 1977. She married Signey G. Winter, a professor at the Wharton School of the University of Pennsylvania, in 1989.

She is survived by her husband as well as her children from her first marriage, Catherine, Allan and Douglas, and four grandchildren.

Her family said that until hours before her death Ms. Rivlin was working on a forthcoming book that called on congressional leaders to end their partisan warfare.

“Stop focusing on winning the next election and using the congressional rules to prevent votes on sensible solutions that are backed by a bipartisan majority and have broad public support,” she wrote, “and get back to the business of working across party lines to make good public policy to solve problems for the American people.