An obese mother-of-three who was desperate to get out of bed for the first time in four years was left sobbing in pain as carers tried to lift her in a hoist, so that she could spend some ‘normal’ time with her family.

Denise Eccleston, 58, from Tamworth, West Midlands, who features in 60 Stone & House-Trapped: Big Body Squad on Channel 5 tonight, had not left her house in seven years due to her 40 stone frame.

The once active mother-of-three used to work as a nurse, but had to quit after injuring her back while on duty, and sadly passed away after being filmed for the documentary.

Denise’s spine was in very bad shape at the time of the documentary, and she needed a constant supply of oxygen due to the pressure of the extra weight on her chest. 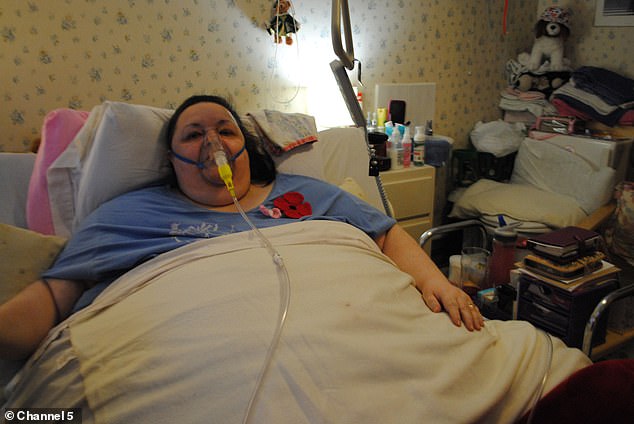 Denise Eccleston, 58, from the West Midlands gained weight after injuring her back working as a nurse. The bed-bound mother-of-three, who weighed 40 stone, passed away after featuring in a Channel 5 documentary, House-Trapped: Big Body Squad 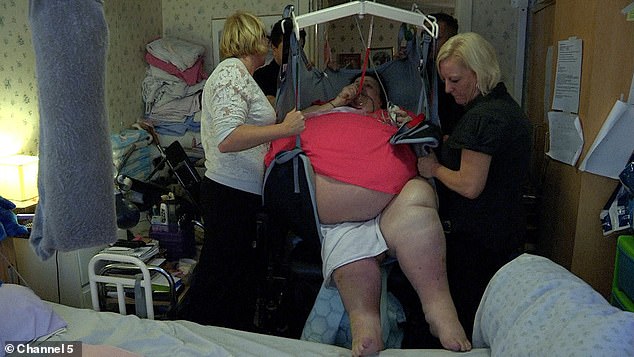 Denise being carried via a hoist into a specially made wheelchair in order to go sit in the living room with her husband Eddie, after spending the last four years in bed

Denise’s dedicated husband Eddie, did his best to accommodate his wife’s condition and give her the support she needed.

He even ordered a custom-made supersized chair so that she could sit in the living-room with him instead of staying in her bed.

‘Even if it’s just a few hours in the day time, I’d be able to chat to my husband and give him some support,’ Denise said in the documentary.

‘It’d be back to how we used to be. And that would be heaven,’ she added. 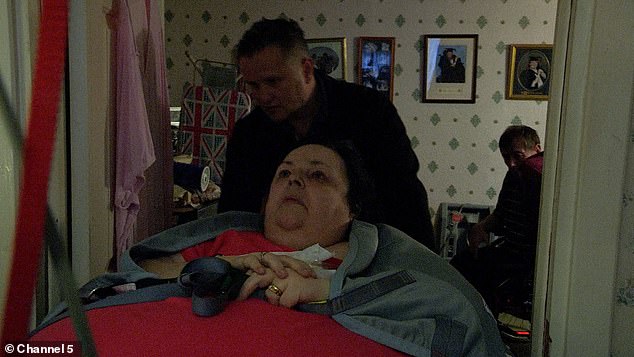 In a heartbreaking moment in the documentary, Denise was filmed while her carers tried to propel her on a hoist to transport her to the chair, which was only a few steps away.

But the pain proved too much for her, and she soon begged to be left on the bed as her husband and carers comforted her. 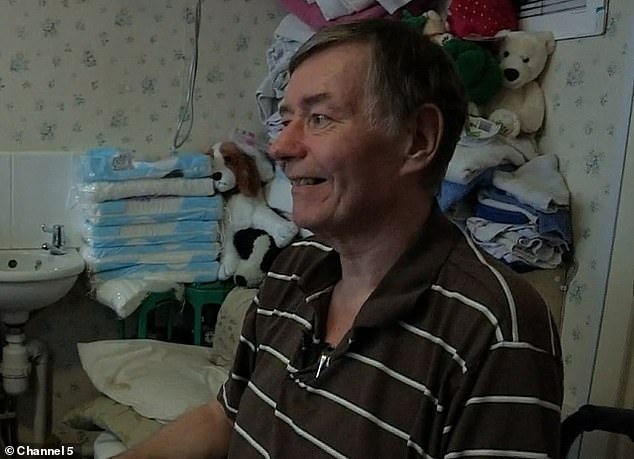 Eddie (pictured) hoped that spending £8,000 on a specially-designed chair would improve his wife’s quality of life and help them spend more time together

The chair, which costed £8,000, took three years to make and was in development for thirteen years. It contained special air-float technology to support someone of Denise’s size and weight, and help her with her blood circulation.

In order to get to the chair in the living room, Denise had to be carried in a custom-designed hoist from her bed to a specially crafted wheelchair, and then from the wheelchair to another hoist located in the living-room. 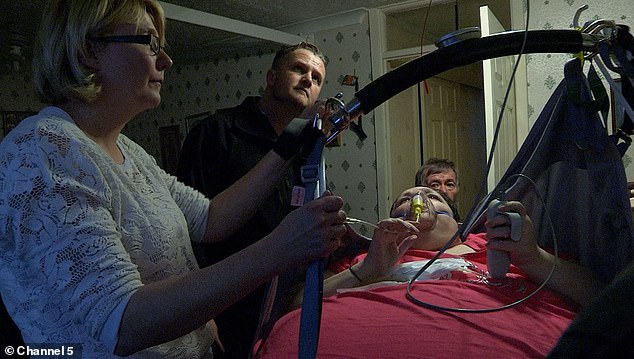 Unfortunately, the second hoist used to lift Denise onto the custom-made chair (pictured) broke, meaning she had to be transported back to her room 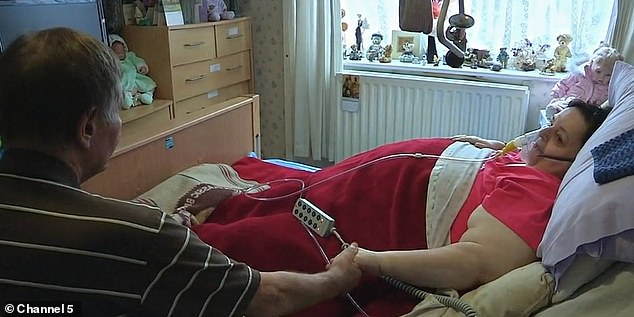 Eddie and Denise wanted to spend more time together, but they couldn’t live a normal life with Denise confined to her bedroom

But being transported from her bed to the wheelchair proved too painful for Denise, because of her chronic lymphoedema, a debilitating condition in which excess fluid collects in tissues and causes swelling.

The pain became unbearable when Denise became stuck in the hoist. Unable to fit in the wheelchair, she was in pain, mid-air in the hoist.  It took her carers thirty minutes to move her four feet in total.

‘It’s not going to work,’ a devastated Denise said, holding on to her oxygen mask.

‘I can’t do this,’ she cried, before begging her husband to stop. 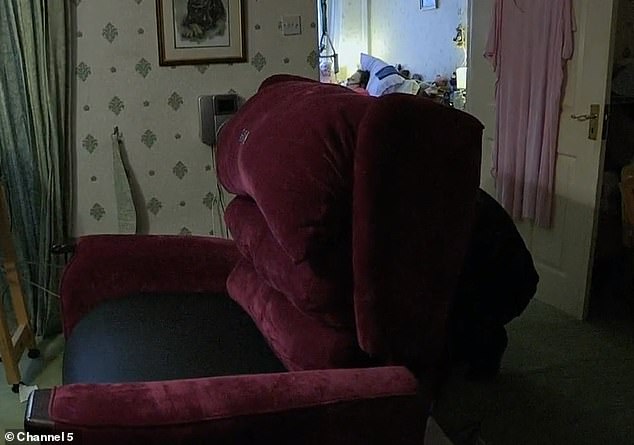 The £8,000 custom-made chair ordered by Eddie for Denise, which sat in the living-room and was only used once before she died 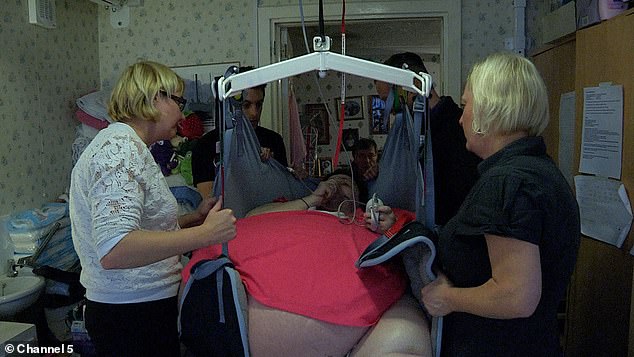 After 40 minutes of agonising pain, the team of carers managed to sit Denise in her wheelchair and it looked as though she would be able to make it to the supersize chair.

But the second hoist, located in the living-room, was broken and refused to lift her up, reducing her efforts and the team’s to nothing.

It was revealed at the end of the documentary that Denise only managed to sit in the chair once before passing away.

Denise started gaining weight after a back injury forced her to quit her job as a nurse.

‘I just miss not being able to be a wife and a mother the way that I used to be. I have been stuck in this room and I can’t get out,’ she said.

‘I want to be positive, because I’m quite a positive person.’ 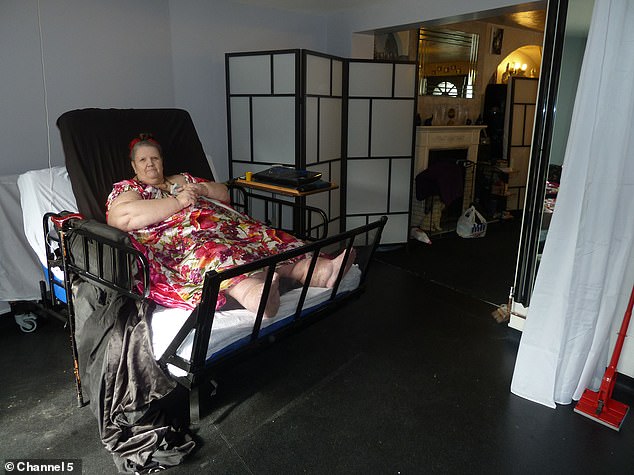 Also featured in the documentary was Sandra (pictured), whose bed had to be replaced with a custom-made model

‘I did try to get out of bed a fortnight ago,’ she said, ‘but I was in a lot of pain and ended up with the paramedics coming.’

She was looked after by two carers, Linda and Andrea, costing her council £16,000 a year.

The two women were hired by Eddie to cater to Denise’s needs while she was bed-bound. They bathed her six days a week, making sure to prevent or treat skin infections – a condition common to extremely obese patients.

Thanks to her husband efforts, Denise was able to hand pick her carers, as the work they performed was of a very intimate nature.

When the carers were not around, Eddie was the one looking after Denise, but thanks to his arrangements, she was also able to pay for her carers to sit with her to give her husband a break six days a week.

Also featured were Keith, an man who weighs 58 stone and has be bathed by two carers daily and Sandra, an overweight woman whose bed had to be replaced by a custom-made model able to support her weight.