Premier Daniel Andrews is in a wicked political position. For the next few months, he will walk a tightrope between the need to restore some measure of normality to people’s lives and the importance of protecting lives, and our health system.

When presented with modelling from the Burnet Institute that suggests a “moderate” risk of the hospitals being overwhelmed even if no rules are eased, he and his Chief Health Officer Brett Sutton predictably erred on the side of caution. 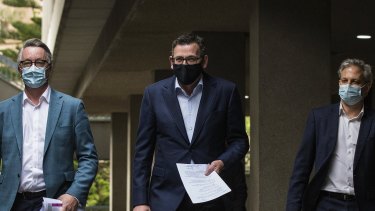 Victoria will be in lockdown for another six weeks until the 70 per cent double-dose mark. Even after that, retail and hospitality businesses won’t be able to trade indoors and people won’t be able to meet at another person’s house. Those milestones will not come until 80 per cent vaccination.

Gladys Berejiklian’s government, whose road map is also underpinned by Burnet Institute modelling, will do at 70 per cent what Victoria is planning to do at 80, and density limits will still apply.

Because NSW received emergency supplies of vaccines and is weeks ahead in its inoculation program, it means Victorians will probably need to wait a whole month after NSW reaches its 70 per cent target, forecast on October 9, to experience similar freedoms.

This will be jarring for Victorians.

The question Andrews government MPs will be pondering is whether the community can bear waiting even longer in return for protecting our health workers and their ability to provide an acceptable level of care to non-COVID patients. Labor politicians will also be wondering how many businesses will be able to reopen their doors come November.

Andrews on Sunday was at pains to offer hope and the potential for a Christmas lunch with family. But each positive utterance was followed by a warning about the fatal consequences of opening too quickly.

In the pandemic, polling showed Andrews’ advantage over the Coalition lay largely in voters’ belief that Labor was better at protecting people from COVID-19. Andrews cannot afford a situation where news bulletins are filled with hospitals struggling to cope, grieving families, and ambulances driven by soldiers because there are not enough paramedics.

If this occurred, some might ask what Victoria’s lockdowns have been for.

Andrews governs with a laser focus on his voter base. His strong emphasis on protecting “nurses and ambos” is difficult to miss.

Andrews’ focus on these groups is driven by an intention to save lives and maintain health services, but it is also political. These workers and their unions were crucial to his 2014 and 2018 election wins both in terms of their propensity to vote Labor and to knock on doors to campaign for Andrews.

“We will stand with you,” Andrews told these workers on Sunday.

Much of the community is deeply battered by stay-at-home rules and their weariness has led to a creeping unwillingness to abide by the letter of the laws. Rightly or wrongly, some may question whether Andrews places too much emphasis on health workers who signed up to do a difficult job.

None of the state’s ministers want the hospital system to be put under pressure. However, there have recently been differences of opinion on the reopening of schools and elements of the picnic plan. Some ministers are more worried about social and economic harm of further lockdowns, while Sutton, who obviously cares about these costs, has put a higher priority on keeping case numbers as low as possible.

The top medico, a trusted voice for much of the public, gave an insight into his thinking when he said on Sunday that “people might well be asking why we are opening up anything” before the 80 per cent double dose figure. It’s questionable if a significant number of cooped-up Victorians would be asking that question.

More than anything else, Andrews – and Victorians – will be hoping the Burnet modelling is overly pessimistic. Its predictions are underpinned by an assumption that case numbers continue on the same trajectory as they were rising as at September 17.

However, the rate of growth has dropped in Victoria in the past week and slowed significantly in NSW, where the crucial reproduction rate is now less than 1. This could be a sign that vaccine uptake will soon start bending Victoria’ epidemic curve downwards.

The Burnet researchers acknowledge their model could be too pessimistic because it does not factor in the potential for warm weather to slow cases down. It also assumes many vaccinated people stop getting tested if they have symptoms.

Andrews repeatedly stressed that modelling is fallible; this point has been missed in much of the national debate over the Doherty Institute model that guide’s national cabinet’s reopening plan.

Could we ease more restrictions at 70 per cent if the real-world scenario panned out better than the Burnet model predicts? “I absolutely hope so,” Andrews said on Sunday.

Victorians, and Andrews, will cross their fingers in unison.