Brett Whiteley has been part of artist Natasha Walsh’s life for years. Her Archibald Prize entry this year is part tribute, part commentary on Whiteley’s 1976 winning piece, with herself in the mirror.

Instead of a naked woman on the left of the painting, Walsh has painted her dog, Arthur, “kind of scratching himself”. She was uncomfortable with the nude in the original, “without a head, discombobulated; she’s kind of just there while the artist does something completely unrelated”. 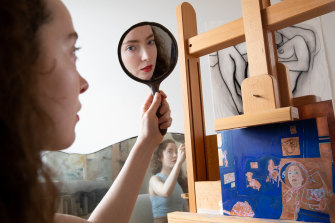 Walsh also appears in the painting seated, in her dressing gown. Under way on the easel is The Gaze, a self-portrait inspired by Gustav Klimt’s Danae, itself a semi-finalist in the 2019 Doug Moran National Portrait Prize. Instead of being curled up with her eyes closed, as in the Klimt, the artist looks directly back at the viewer.

“On the one hand, it is an homage, admiring the experimental parts of [Whiteley’s] practice, the way he celebrates the function of the artist in our culture, but on the other hand, it’s me trying to reposition the female in that space,” Walsh says. “It’s an homage and a gentle subversion.”

Whiteley’s was the first studio the Neutral Bay-based artist visited, when she was seven. Later, studying at Sydney’s National Art School and working as an artist, the shadow of Whiteley loomed large. In 2018, she won the Brett Whiteley Travelling Art Scholarship which took her to Paris and London.

“I have this immense admiration for the way he was like a bowerbird, alchemically creating art from all these places and components. I loved how experimental he was, but also his whole thing as an artist. He was creating his own persona… there’s almost this performative quality, especially in his depictions of the studio with an expensive Chinese vase, for example, it feels like an imagined space – partly real and partly exaggerated.“ 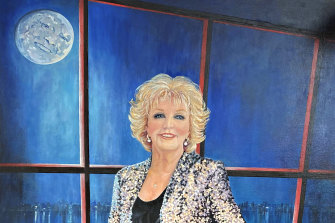 Patti Newton, painted by Margaret Dawson, is an entrant in the Archibald Prize 2022.

A four-time finalist in the Archibald, Walsh has her first solo show at N.Smith Gallery in May. “I love how in art you can communicate in a way that is not as direct as speech or writing. You can persuade people gently,” she says. “You can explore the human psyche in an image, you can get into people’s minds.”

Unlike Walsh, Patti Newton had never considered having her portrait painted, let alone one that would to be entered in the Archibald Prize. When Melbourne-based artist Margaret Dawson approached her with the idea last year, Patti was unsure, but her late husband, Bert, convinced her.

In hospital when the prospect was flagged, the much-loved entertainer was thrilled with the idea – even more so when he saw a study of the portrait. “In the last sitting, [Margaret] had Bert’s face in the moon and the next time I saw her, he was gone,” Patti says. “It was very poignant to have that there because he knew about it.” 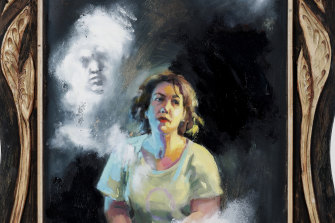 Detail of Wendy Sharpe’s ‘Self portrait with ghosts’.Credit:John Fotiadis

Dawson worked as an artist with the Prime Minister’s Department and the Department of Trade in Canberra throughout the 1970s, and then spent a decade sculpting, designing and installing the Myer Christmas windows.

At a certain point in making the two-metre by one-metre portrait, she would get her husband to turn it upside down on the easel. “When you start to paint to draw and paint, your brain focuses on what you think you see: you know where the eyes are, where the nose is, but it mightn’t be correct,” she says. “When you turn it up, you have to focus on something that the brain is not looking at, so then you see your faults.”

The portrait celebrates the late pioneer of TV known as Moonface, who died in October last year, as well as his wife, and involved three live sittings at the artist’s home in Blackburn, where the Newtons started their married life.

Patti suggested one of the defining elements featured: a moon in the window with Bert’s face in it, looking down. “Even now, we look up at the moon and say goodnight to Bert, particularly the little [grand] kids,” she says. 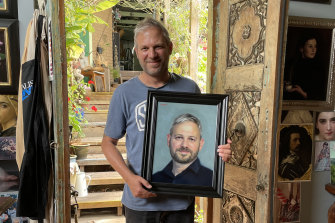 Brett Sutton holding a study of him by Vicki Sullivan, in the leadup to her painting him for the Archibald.

Sydney-based Wendy Sharpe won the Archibald Prize in 1996 for her Self-portrait as Diana of Erskineville, the first self-portrait by a woman to win; she has been a finalist six times. A self-portrait with ghosts in the background is her entry this year.

Sharpe’s paternal grandmother and great-aunt were psychics, as was her great-great-grandmother, who lived in what was then Russia and is now Ukraine. “I was thinking about all these psychic women in my family and have always loved spirit photography,” Sharpe says. “I also like things which have something real and something intangible, or not of this world, in the same painting. It is kind of two worlds, the real and the supernatural.” 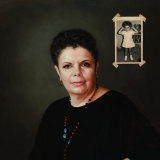 A realist painter, Sullivan continues to enter the Archibald even though she’s never been a finalist. Realism is not popular in this country, she says. “I want to make my portraits seem as if the subject could walk straight out of the painting and into the room.”

Entries in this year’s Archibald Prize, with the number one prize worth $100,000, are due at the Art Gallery of New South Wales by April 1 and must have been painted in the past 12 months. The winner will be announced on May 13.