The country’s leaders have broadly agreed on changes to isolation requirements and testing after a last-minute national cabinet meeting as Omicron sweeps the country.

Prime Minister Scott Morrison is speaking after national cabinet met to discuss a shift in pandemic management ahead of New Year’s Eve.

So far 21,304 cases have been confirmed across the country, the highest daily total yet. Case numbers are believed to be much higher due to testing and result delays that have left many relying on rapid antigen tests for confirmation.

Earlier on Thursday, Health Minister Greg Hunt said that while case numbers were growing, there was strong evidence from Australia, South Africa and the United Kingdom that the Omicron variant was less severe than the Delta strain of the coronavirus. 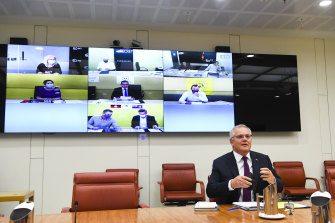 Hospitalisation rates remained low, he said, so the main challenge was now the number of people who were in isolation as close contacts.

“So today, national cabinet is focusing on the furloughing and the contact definitions and the way in which we’re able to test people to ensure that we are prioritising those PCRs for people who are clearly symptomatic and highly at risk,” he said on Thursday morning.