Australia’s Chief of Navy has opened the door to the nation’s ageing fleet of conventional submarines remaining in operation into the 2050s if the federal government’s proposed nuclear-powered fleet cannot be built in time.

Vice Admiral Mike Noonan confirmed the six Collins-class submarines, which were built in the 1980s and early 1990s, might need to undergo two complete rebuilds over the coming decades. 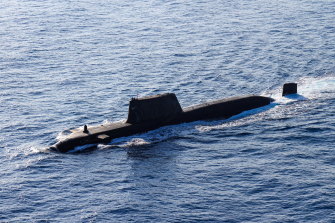 The development means Australia could be operating 50-year-old submarines at a time when tensions in the Indo-Pacific region are predicted to heat up in the face of escalating Chinese aggression in the South China Sea and the Taiwan Strait.

Prime Minister Scott Morrison and Defence Minister Peter Dutton have previously confirmed all six Collins-class boats would undergo a life-of-type extension, which gives the boat an extra 10 years of service. It has not previously been revealed that Australia’s military planners were contemplating a second rebuild in the 2030s and 2040s.

Mr Morrison announced last month it was dumping a $90 billion contract with France to build conventionally powered submarines and would instead develop a nuclear-powered fleet with Britain and the United States under a new defence pact called AUKUS.

But the nuclear submarines may not begin arriving until the 2040s, which would be years after Australia’s first Collins-class submarine is expected to be taken out of service in 2038 following one life-of-type extension.

Vice Admiral Noonan rebutted suggestions Australia would face a capability gap in the 2040s, telling a Senate hearing on Friday the Collins-class submarines could undergo a second extension.

“They’re not going to be retired … we will upgrade all six as per the government’s announcement,” he said. “I don’t write off the opportunity for us to further upgrade these submarines beyond that period.”

Asked by Labor senator Kimberley Kitching whether this meant the Collins-class boats would still be in the water in 2040 or 2050, Vice Admiral Noonan said: “Yes senator, potentially.”

Vice Admiral Noonan also confirmed American and British nuclear-propelled submarines might be based in Australia in the coming decades while Australia developed expertise in their nuclear propulsion technology.

He said there had been no discussions about basing American or British submarines in Australia but it was something he envisioned under the AUKUS agreement.

“I do expect as a result of the AUKUS announcement that we will certainly be keen, I’m certainly keen, to see a greater visibility of visits by UK and US submarines in order to give my people exposure to the sort of submarines and technology that we will be acquiring and ultimately to get experience in nuclear technologies,” he said.

Vice Admiral Noonan also confirmed Australia was not yet able to access certain parts of British and American submarines because of the sensitive technology. He said the Defence-led taskforce assessing how to develop nuclear-powered submarines over the next 18 months would work on how to access this technology.

“We are unable to access the back end of the submarine under our current security arrangements with the US,” Vice Admiral Noonan said.

The main justification for going with the US and Britain is that their submarines use highly enriched uranium and the reactor does not need to be refuelled for the 33-year lifespan of the boat. If Australia were to build nuclear-powered submarines with the French, the nuclear fuel in the core of the boat’s reactors would have to be replaced every 10 years.

But a number of defence experts and former politicians, including ex-prime minister Malcolm Turnbull, have raised doubts about the claim that the reactor would never need to be accessed and suggested Australia would need some kind of nuclear industry to maintain the fleet.

Australian Manufacturing Workers’ Union assistant national secretary Glenn Thompson told the Senate hearing he didn’t know of “any piece of equipment that is set-and-forget for 33 years”.

Mr Thompson also criticised the government for a lack of consultation with unions, saying thousands of jobs were at risk from the cancellation of the French contract.

“We’ll lose the skills, the jobs, the digital infrastructure, the SME [small and medium enterprises] strategy, research and innovation,” he said. “We trashed Australia’s reputation as a nation with which to conduct business. We’ve discarded our sovereign risk in addition to our relationship with the French.”