Author recalls growing up in estate plagued by drugs and prostitution An author has shared a candid account of growing up on a Scottish sink estate in the Nineties.

Fashion journalist Lynne Coleman, who has written three books and now lives in Edinburgh, moved to an ex-council house in Auchenback, a few miles outside of Glasgow, when she was six.

She told how arson, vandalism and violent brawls were ‘commonplace’ throughout her traumatic childhood, and recalled the time her alcoholic father clashed with a local gang who were using the park outside their home for prostitution.

It also saw her sister Laura spiral into an addiction to heroin which resulted in her dying ‘under suspicious circumstances’ at the age of 36 from an overdose. 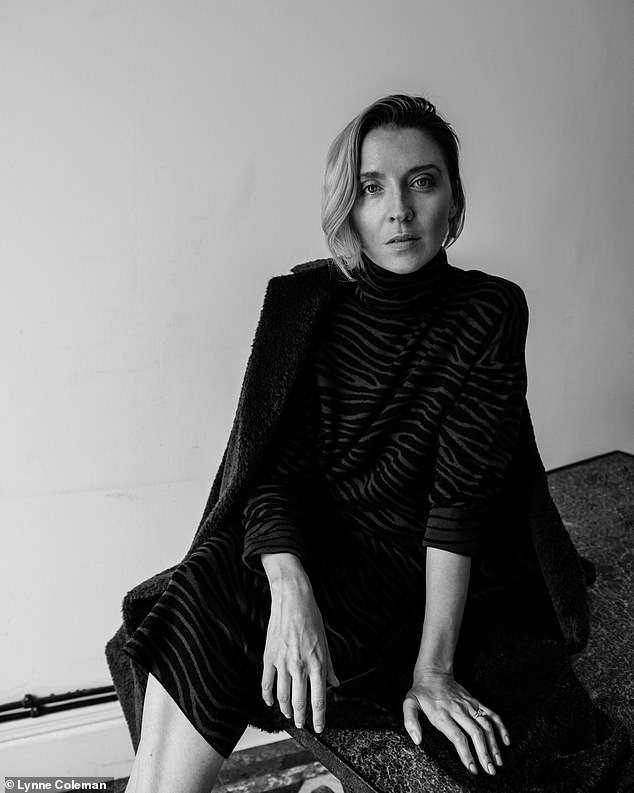 Fashion journalist Lynne Coleman, who now lives in Edinburgh, moved to an ex-council house in Auchenback, a few miles outside of Glasgow, when she was six

Lynne fled when she was 17 and set up home with her first husband in her late teens, but claims she only felt ‘free’ when, over a decade later in 2016, she moved in with her second husband, whom she has been with for five years.

Speaking to FEMAIL, mother-of-three Lynne said she is thankful to now live in a ‘safe space with no conflict’, adding: ‘I can only imagine how hard Covid-19 has been for people trapped in a place that doesn’t feel safe.’

‘Home is so important now because it’s the place where I feel most secure,’ she said.

‘Having to spend the bulk of your time in one place means you need to mentally and physically declutter.’

Writing on The Flock, Lynne told how she’d never been comfortable with the concept of home until meeting her current partner. 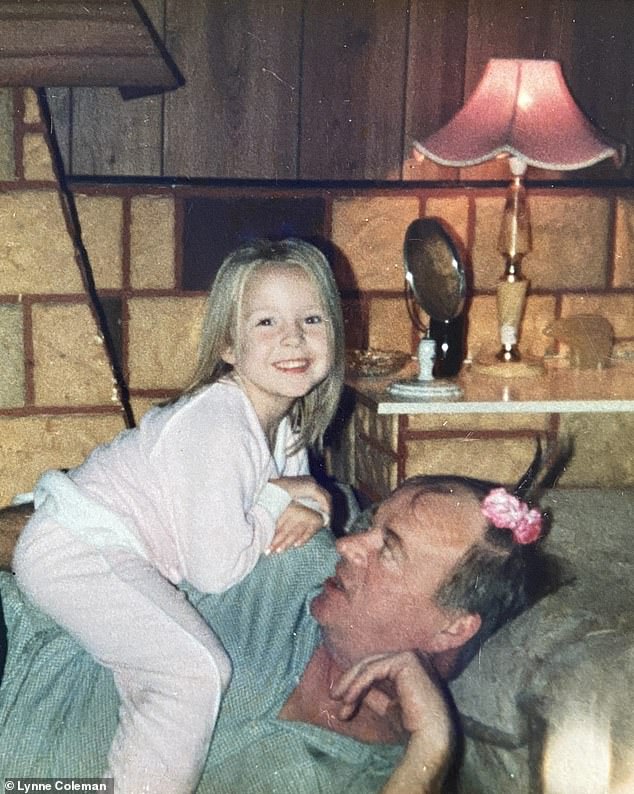 Mother-of-three Lynne, pictured with her late father, said she is thankful to now live in a ‘safe space with no conflict’

‘The way I grew up was unconventional – a fact I discovered to my detriment much too late, via the cataclysmic collapse of a first marriage that book-ended my twenties,’ she explained.

‘As a kid, novels like Matilda and movies like Annie resonated for reasons I couldn’t quite put my tiny finger on.

‘My father drank daily to drown out reality and my mother radiated a synthetic warmth that seemed to fuel conflict more than comfort. When I was six, we left our airy two-bed Victorian corner flat in the south side of Glasgow in order to buy an ex-council house in a town a few miles outside the city.

‘The moving process felt rushed. As my father clashed with a gang who were using the park outside our new home for prostitution, we crash-landed into the harsh surroundings of early Nineties Auchenback, my juvenile mind overtaken with the sensation we were moving from the frying pan into the fire.’ 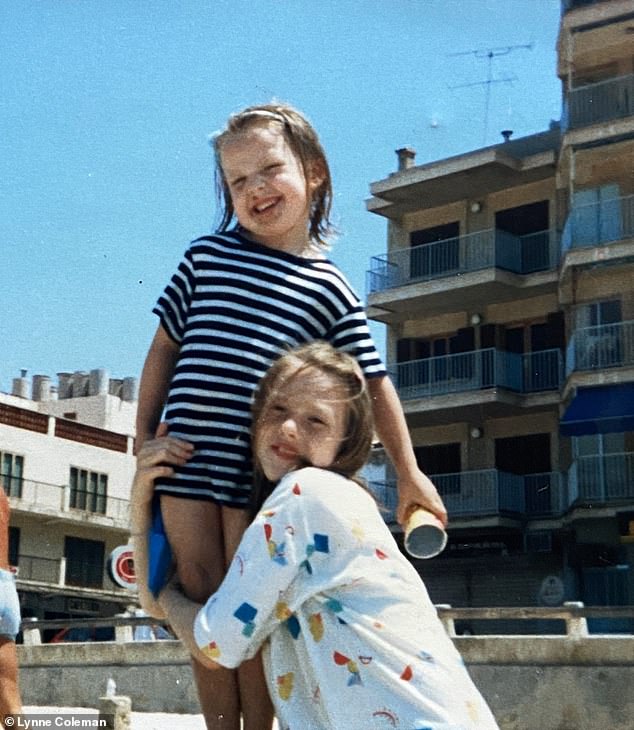 Lynne pictured on their estate as a child with her older sister Laura, who died of a heroin overdose under suspicious circumstances at the age of 36

Shortly after they settled in, Lynne told how she watched a drug dealer who lived across the road being chased by rival henchman.

‘Thinking our house would be a safe haven, he battered down the front door shouting for my dad to aid him,’ she recalled.

‘Dad was, of course, in the pub, leaving my church-going-mother operatically shrieking at him to shoo or she’d call the police. This kind of activity in our hood would become commonplace, alongside arson, vandalism and violent brawls.

‘From here, my father fell further into the bottle. Unemployed and unengaged, his unhappiness was palpable. Nonetheless, I felt a homely comfort coorie-ing into this drunken beached-whale of a man, most often to be found sleeping off the Guinness while burning his backside on the two-bar electric fire my mother hated heating the house with due to its cost. 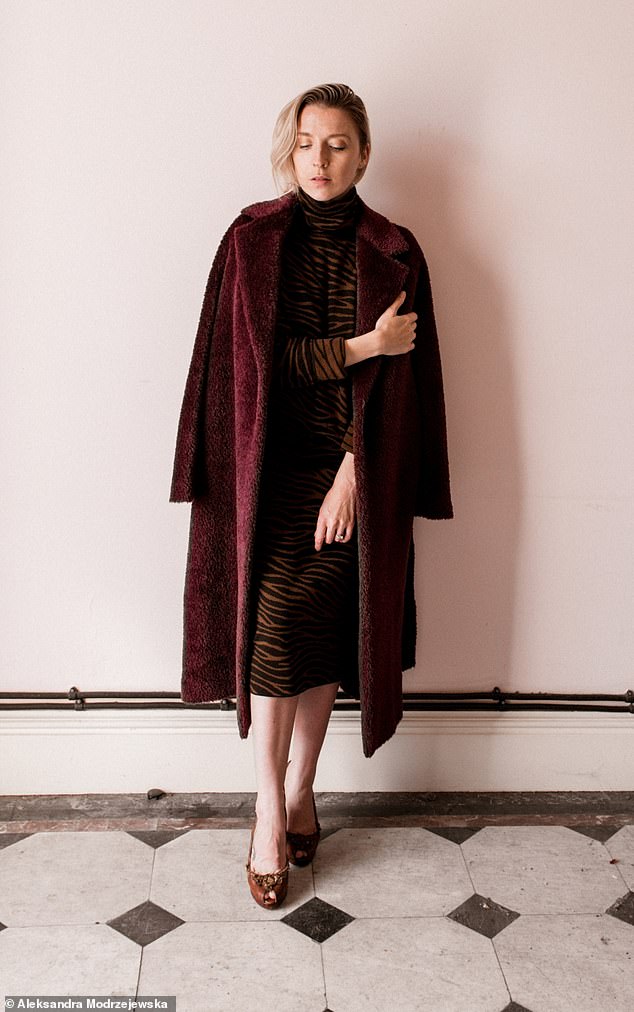 Shortly after they settled in, Lynne (pictured now at home in Edinburgh) told how she watched a drug dealer who lived across the road being chased by rival henchman

‘A former merchant seaman, he remained marooned here until his death eight years later, succumbing to the social trappings of Scottish mortality rates following to a lifetime abusing alcohol and nicotine. He was 52.’

Lynne told how her mother held down a job at a bank providing the roof over their heads and the food in their bellies. Emotionally though, she said they were ‘malnourished’.

‘The situation left a lot of alone time for my sister and I,’ she explained.

‘She was six years my senior, and the emotional scar tissue created by the shrapnel of our family’s dysfunction would cast a long shadow over her tragically short life, repeating behavioural patterns she learned in childhood.

‘She died of a heroin overdose under suspicious circumstances at the age of 36. In one of life’s surrealist moments, I was informed of her passing via a FaceTime call from my estranged husband, the same night I lost the gong for communicator of the year at the Scottish Fashion Awards in London. 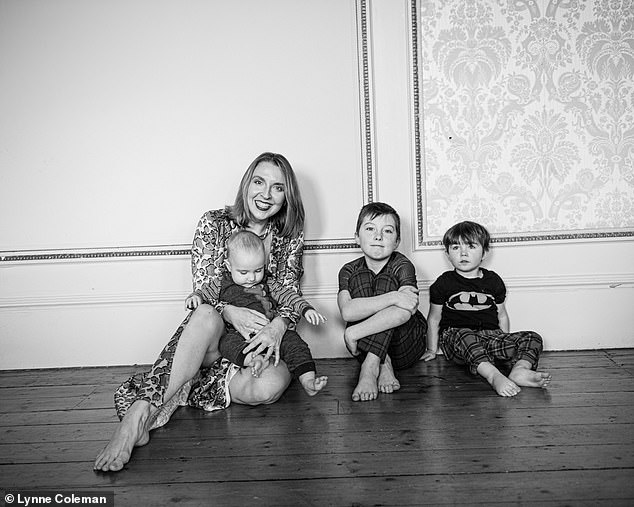 Lynne fled her family home when she was 17 and set up home with her first husband in her late teens, but claims she only felt ‘free’ when, over a decade later in 2016, she moved in with her second husband, whom she has been with for five years

‘In reality I’d lost her 15 years prior to that moreish golden brown.’

While her sibling turned to drugs, Lynne took a different path, spending all her spare time at friends’ houses.

‘Going out was always preferable to staying in,’ she said. ‘Socialising became my shield, and sleepovers in a succession of besties’ bedrooms were scheduled like a monthly rota in home avoidance.

‘There were two states, solitude or socialising, and anything in the middle made me uncomfortable. I became the Mo Farah of emotion, perfecting the art of running away like a long distance athlete. It was a party trick I would later learn to unpick in a bid to become happier.

‘My own exit strategy was clear – buckle down and secure a university place. And so, I studied.’

Lynne told how she studied so hard that when the police turned up one afternoon looking for witnesses to a petrol bomb attack that killed her neighbour’s dog and burned their house down, she had to ‘regretfully inform them that if I stopped every time a bang or commotion occurred outside, I’d never get any work done’. 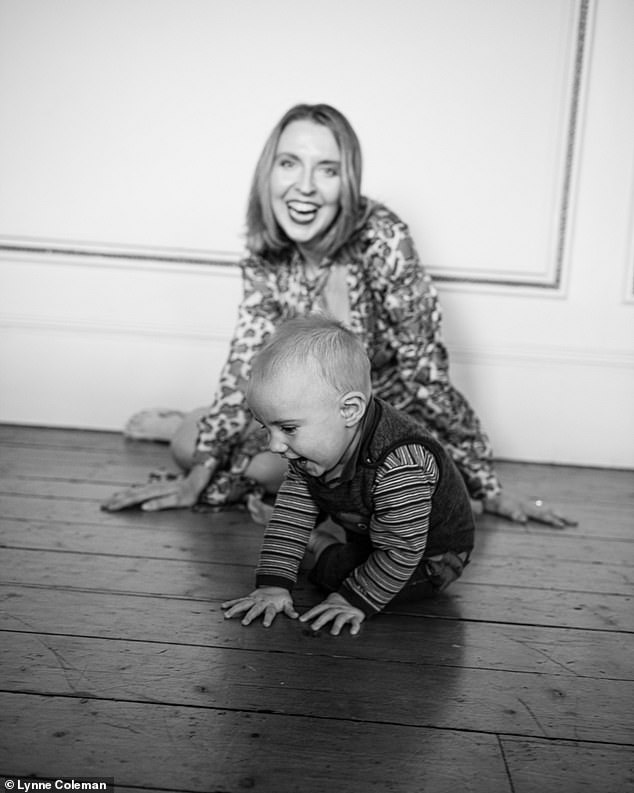 Speaking to FEMAIL, mother-of-three Lynne said she is thankful to now live in a ‘safe space with no conflict’, adding: ‘I can only imagine how hard Covid-19 has been for people trapped in a place that doesn’t feel safe’

That was her last summer in that situation. At 17 she moved cities, but admitted it didn’t take long for her teenage rebellion to catch up with her.

‘I did the most controversial thing I could think of by settling down and building a home in the twilight of my teens,’ she wrote.

‘It would take another decade of personal disasters, mixed with exceptional high points including the birth of my firstborn and having my first book published, before I would finally get to that elusive place I longed for.

‘On the day I packed my toddler and 10 years of life up to move from our one-bedroom flat to the home of my now-husband, I finally felt free.

‘We arrived at our illustrious new address totally unaware that 200 years before, Marie Antoinette’s daughter had done the same flit, fleeing the revolution to set up home six doors down from our new pad.

‘I think about her now, walking the street, enjoying the gardens and taking in the same view I do, while she too healed from her own personal trauma. I fantasise about fictitious cuppas, trading war stories about our upbringings. “Oh, your father died due to his set of social circumstances? Mine too! Your mother rubbed people up the wrong way? Snap! Your sibling perished at the hands of an oppressor? Same here!”‘

Lynne, who is currently working on her fourth book, said she now feels safe in the knowledge that she has finally found ‘home’. At least 20 more migrants arrive in UK waters this morning