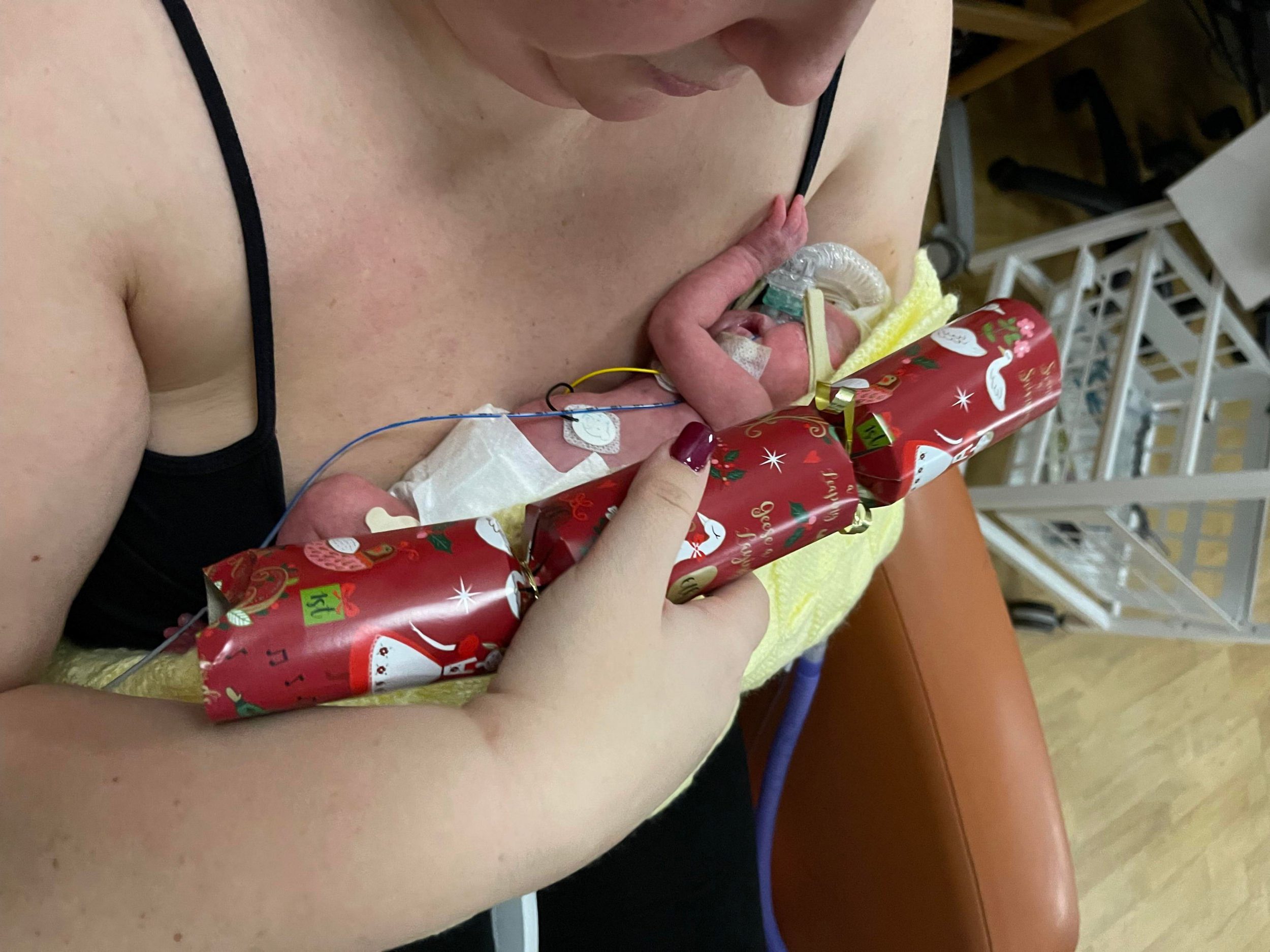 These parents are counting their blessings this Christmas, celebrating the arrival of their baby daughter after an incredibly stressful birth where her twin sadly didn’t make it.

Despite being born almost three months early, Lily Bickerdike-Guile defied the odds of her survival, and will be enjoying her first Christmas weeks before she was officially due to be born.

Tiny Lily was born alongside her twin sister Daisy on October 20 at just 15oz after mum, Cheryl Guile, went into labour at 23 weeks.

The twins were given just 20% chance of survival and, tragically, Daisy developed a serious infection and passed away in November.

However Lily, who is being cared for in the NICU unit at John Radcliffe hospital in Oxford, has continued to stun medics with her progress and Cheryl, 38, has been documenting her growth by comparing her to various objects.

When Lily was five days old and weighed just 1lb, she was pictured next to her dad Ray’s hand.

At 20 days old and weighing 1lb 5oz she was only marginally bigger than an iPhone, and at one month old and 1lb 9oz she was around the size of a pop bottle.

More recently, Cheryl, from Milton Keynes, snapped eight-week-old Lily (who now weighs 2lbs 9oz) next to a Christmas cracker, as she prepares to celebrate her first Christmas despite not being due until February 6 next year.

Cheryl, who also has four other children and one grandchild, had an emergency caesarean when her waters broke early and she developed an infection in her womb.

She said: ‘I heard the team of nurses gasp when they saw how unexpectedly tiny they were.

‘I was told by the consultant that we would need some serious good luck on our side if they were even to survive the night as their chances were very low. I was so terrified, I didn’t know if Ray would make it to see our girls alive.’

In her short life so far Lily has already endured numerous medical setbacks and procedures, including countless blood transfusions, a collapsed lung, and a lumbar puncture.

Cheryl says of her tradition measuring her daughter: ‘Measuring Lily against objects started after Daisy passed away, I realised how precious every moment was and wanted to document every part of Lily’s journey.

‘My children had also said when they met the girls, when Daisy was critical care, that they never realised their extreme teeny size from the pictures I had shared so I decided to do the comparison pictures.’

Unfortunately, due to Lily’s extra care needs, the family won’t get to be together on the day itself, but they’ve made arrangements so no one is alone.

‘I have left my children at home for two months while spending every single day with Lily,’says Cheryl. ‘I have promised them that I will be home with them at Christmas.’

She continues: ‘Ray is staying on his own with Lily. It will break my heart to leave her but her incubator is decorated with little pink fairy lights and she has a little Christmas stocking in the hope Santa will stop by.’

They’re now looking forward to the day Lily is cleared to come home.

‘It will be the time we were supposed to be bringing two identical babies home so it will be tinged with sadness but at the same time it will be the happiest day of our lives.

‘I know her brothers and sisters will be fighting over who will be holding her.

‘But the most important thing is that we will finally be able to be a family again.’