Entitled Moby Dickens, it portrays Dickens knee-deep in floodwater in her hometown of Lismore. 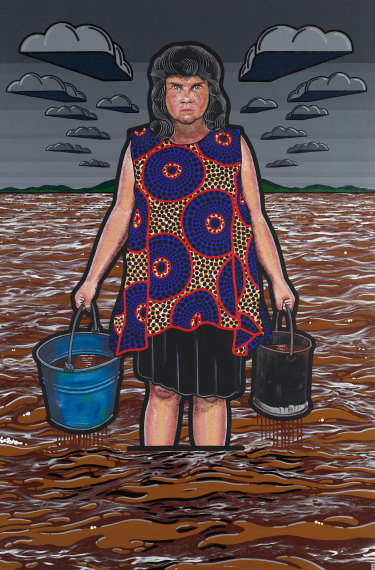 “This painting represents 20 years of taking a risk and pursuing a dream, surrendering normalised employment,” he said.

“I’m sure many of my artist colleagues can relate to that,” adding that a change of government may change the fortunes of artists.

Douglas paid tribute to his parents Bob and Yvonne Hill, saying his mother would have probably said: “Adam, you’ve got the wrong socks on.” 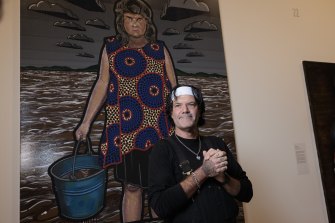 Blak Douglas with his Archibald Prize-winning portrait after the announcement on Friday. Credit:Brook Mitchell

His subject, Dickens, is one of the nine artists commissioned to do work for the Art Gallery of NSW’s Sydney Modern project due to open later this year. She appeared on video link from her Lismore home, during the announcement.

“I’ve known Karla for about 20 years,” Douglas said. “I am godfather to her daughter Ginger, and Charlie the dog. I knew that she was tentative about being portrayed. But I knew she would say yes to me,” he said.

“Painting her in water is such a literal metaphor for everything we’re embroiled in right now. Globally and domestically and there’s a sneaky, cryptic kind of metaphor in there about the art world. She insisted that she should be painted with a bucket that is leaking.

“There are 14 clouds in the painting. It rained nonstop in Lismore – 14 days and 14 nights of rain, it was quite biblical. And I’m really stoked to have my trademark clouds for the first time in an Archibald entry,” he said.

Douglas is trained in illustration and photography, and became a self-taught painter. Born in Blacktown and raised in Penrith, he is also a classically trained didgeridoo player, and has performed nationally and internationally accompanying the likes of Christine Anu, Emma and Casey Donovan, Jessica Mauboy, Jenny Morris, Jane Rutter and Peter Sculthorpe.

As his reputation in the art world grew – thanks to his graphic illustrations with a social justice bent – he changed his name to Blak Douglas to avoid confusion with comedian Adam Hills.

This year’s $40,00 Sulman prize winners are Claire Healy and Sean Cordeiro for their rendering of the fight between the warrior Raiko and the demon Shuten-doji.

The winner of this year’s Wynne Prize is Nicholas Harding, with his painting Eora, of pandanus trees.

The Archibald, Wynne and Sulman exhibitions open on Saturday at the Art Gallery of NSW.