When Scott Morrison came under frenzied, sustained assault last week over his handling of the flood emergency, there was one person who did not come out swinging. Anthony Albanese.

The Opposition Leader’s response was – by conventional political standards – restrained. He encouraged people to heed the warnings, while urging governments to provide whatever support people needed wherever it was needed. 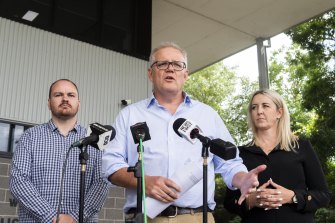 Prime Minister Scott Morrison came under fire for his response to the floods.Credit:Rhett Wyman

He stopped being his own attack dog.

While he was lauding the achievements of women on International Women’s Day – then promising in speeches on the economy and foreign policy to be part Bob Hawke, part John Howard and part Kevin Rudd – the person spearheading Labor’s assault on the Prime Minister’s handling of the crisis, and landing direct hits, was his disaster and emergency management spokesman, Queensland Senator Murray Watt.

It was the culmination of a deliberate strategy to lift Albanese above the fray. To make him look prime ministerial. The lost weight, the new glasses, the tamed hair, the sharper suits was part of the transformation process, and this more measured reaction in a crisis, criticism delivered with a skewer rather than a meat axe, just as people are beginning to pay more attention, built on that.

If you believe the polls, it’s working.

Senior members of the government, and Morrison particularly, have spent the best part of three years convincing themselves that Albanese was their best asset, that no one knew who he was and even if they did, they would never vote to make him prime minister because they could never picture him in the role. Added to that, COVID-19 not only prevented Albanese from defining himself early on, it also blocked the government from doing it for him.

The basic mistake of underestimating an opponent bred complacency.

Despite history showing that opposition leaders seldom match incumbents when it comes to preferred prime minister and despite Morrison’s own chequered performance, the view peddled within the government, relayed by obliging commentators, was that Morrison’s higher personal ratings would transport the Coalition to another victory.

When Labor’s lead solidified, frantic efforts were unleashed to brand Albanese as a risk, to paint him as a threat to national security because he was China’s preferred candidate and to cast him as the most left-wing leader of the Labor Party since Gough Whitlam. So far they have not registered.

Now, according to an increasingly desperate Morrison, Albo has gone from being brainwashed by the Chinese to being programmed by Jenny Craig.

Clearly confusing himself with Shakespeare’s Caesar, Morrison struck on the bizarre tactic of mocking Albanese’s new lean and hungry look to argue it was another reason not to trust him.

“I’m not pretending to be anyone else. I’m still wearing the same glasses. Sadly, the same suits … and I weigh about the same, and I don’t mind a bit of Italian cake either,” Morrison said on Sky, referring to Albanese’s refusal to even take a bite of cannoli for the 60 Minutes cameras on his birthday.

This from the man who created the daggy dad persona – a character his colleagues had never previously seen – for the 2019 election, then ever since has pretended to be everything from a hairdresser, to a welder, to a lab technician, confident that goofy pictures would grab voters’ attention. They have. At great cost to his dignity and authority.

Liberals who a few months ago rattled off a list of up to a dozen gettable seats in NSW as their pathway to victory are in despair. They are convinced the election is lost. They are furious with Morrison and Alex Hawke for deliberately stalling preselections and incensed by briefings to media against Dominic Perrottet over management of the flood crises claiming it’s a repeat of the undermining by Morrison’s surrogates of Gladys Berejiklian during the Black Summer fires.

They say Andrew Constance could regain Gilmore, but after that it’s a struggle. They believe North Sydney, held by Trent Zimmerman, is under serious threat from independent Kylea Tink, that Dave Sharma could lose Wentworth to another independent Allegra Spender and the way things are going, not even Berejiklian could reclaim Warringah from Zali Steggall.

They say they could lose five seats in Western Australia, one in South Australia, four in Victoria and two in Tasmania. Another plugged-in Liberal has drawn up a list of 24 seats at risk across the country. That is much more optimistic than Labor dares to be. Labor’s key players, incredulous that Morrison could muck up another disaster, are doing their utmost to keep expectations in check.

Unsurprisingly the deep gloom inside the government has triggered more than the usual academic internal canvassing of the nuclear option. Removal of Morrison. This week, one Liberal MP cautioned against discounting the possibility of a change before the election then named a cabinet minister he believed was slyly scheming against the Prime Minister. MPs backing both likely contenders – Peter Dutton and Josh Frydenberg – have also privately accused their opponents of canvassing votes in preparation for a contest either before the election or after.

The truly depressed say it is too late. Too late for it to make a difference and too late to engineer it. The optimists – and there are still a few around – say there is no such thing as an unwinnable election. That is true. All the government needs is clear air, a responsible budget and a faultless campaign during which Albanese implodes.

Above all it needs Morrison to behave like a prime minister, to forgo stunts and blame-shifting, leave the sledging to others or to negative advertising and construct a compelling argument for his re-election. Not too much to ask, is it?