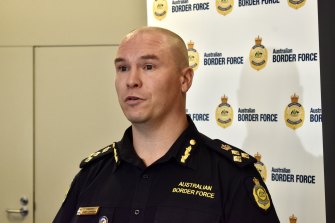 Commander West James Copeman, who celebrated the 100 days with other ABF staff with a cake at Perth Airport on Friday, said the figure amounted to about 40 per cent of the arrival numbers seen pre-COVID, but it was increasing week by week.

Copeman said the airport ABF workforce had surged to meet demand and, generally, the past 100 days had been smooth sailing, but there were some issues with international arrivals not knowing Australia’s vaccination requirements.

“International passengers I would suggest are not match fit, so everyone’s learning different rules and regulations around coming in,” he said.

“Australia does have a set of requirements that you need to be able to complete prior to entry in Australia, but I fully encourage people to get on and research where they’re going to, not just Australia, but where they might be departing from.”

In May, an Irish couple who flew into Perth to meet their toddler grandchild for the first time were deported shortly after arriving from their 19-hour flight.

At the time, the ABF said the unvaccinated couple had arrived without a valid medical exemption.

Copeman also urged arrivals into WA to get their heads around the new digital passenger declaration card, which was introduced in February.

The card replaces the paper-based card handed out on planes prior to arrival in Australia and has been used 1.7 million times. The old card will continue to be an option.

“With the border well and truly open and inbound passenger numbers increasing daily, this also serves as a timely reminder for travellers to complete their DPD before jumping on your flight to Australia to ensure you speed up processing on arrival,” he said.

Despite muted traveller figures compared to pre-COVID levels, the government is hopeful Premier Mark McGowan and Tourism Minister Roger Cook’s upcoming trips to Europe, Indonesia, South Korea and Japan will help reconnect WA with the rest of the world, despite still being in a state of emergency.