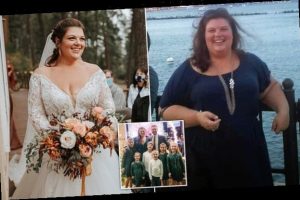 Bride who weighed 420lbs and ate 8,000 calories a day looks almost unrecognizable in wedding photos after losing more than half her body weight

A bride who weighed 420lbs and ate a whopping 8,000 calories a day looks almost unrecognizable in her wedding photographs after dropping 196lbs.

Darci Hanson, from Seattle, Washington, never imagined that she would be able to find a wedding dress to fit her 28-30 frame when she reached her heaviest weight of 429lbs in November 2018.

The mother-of-six, 33, admitted she had an insatiable addition to food, and would consume nearly two litres of Coke, an entire raw cookie dough roll and massive carb-laden pasta and bread based dishes daily.

But after she lost a friend at a young age, Darci realised she needed to make healthier choices so she could always be there for her kids – Kathryn, nine, Julianna, eight, Rosaleigh, seven, Wyatt, six, Franklin, four, and Annabelle, three. 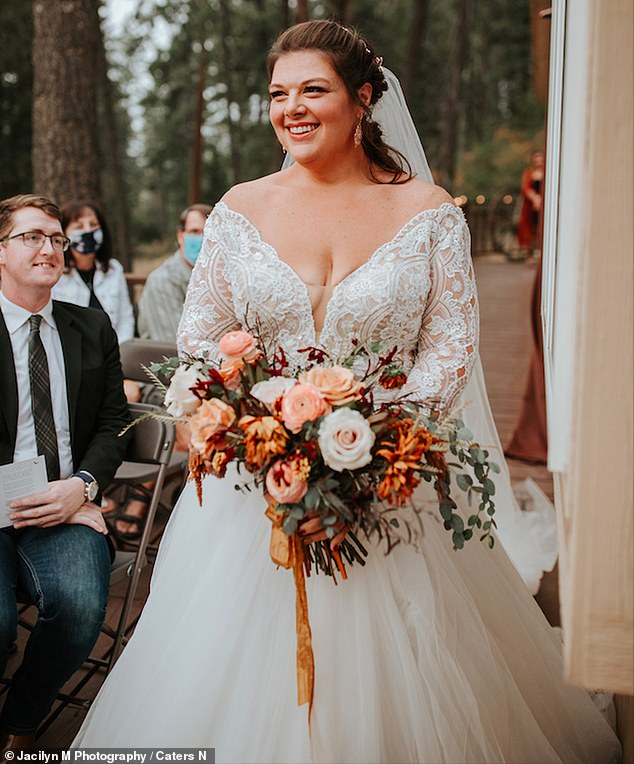 Mother-of-six, Darci Hanson, from Seattle, Washington, 33, who used to eat 8,000 calories a day, looked almost unrecognizable in her wedding photographs (above) after dropping 196lbs and eight dress sizes 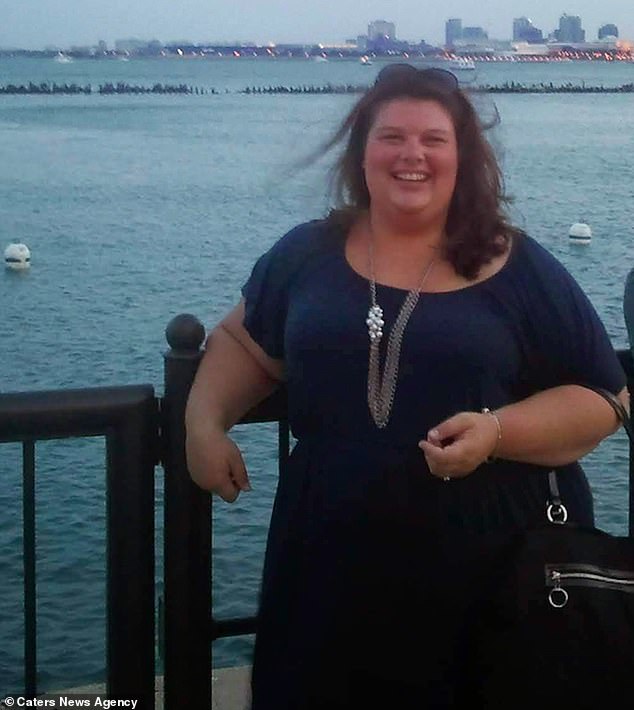 Darci Hanson, (pictured before weight loss) thought she would never find a wedding dress when she was at her heaviest weight of 429lbs back in 2018

She explained: ‘I was always a pudgy kid, but low self-esteem compounded by poor relationships made me turn to food to try and cope.

‘I had a terrible food addiction that I used to avoid my emotions.

‘I would drink Coke like crazy and loved all things bread and carb, especially donuts and pasta.

‘I had no idea how many calories I was consuming. The weight kept piling on.

‘I lost a dear friend way too early in life, and it made me look around and realize I wanted a better life for myself and my kids.

‘I didn’t want to waste a single second I had been given.’ 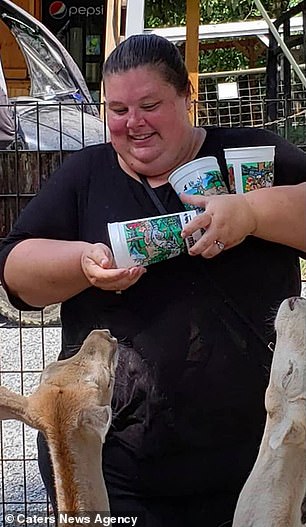 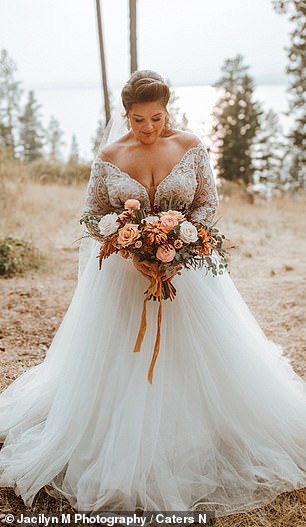 Darci said she would often eat nearly two litres of coke, an entire raw cookie dough roll and massive carb-laden pasta and bread based dishes daily (pictured before and after weight loss) 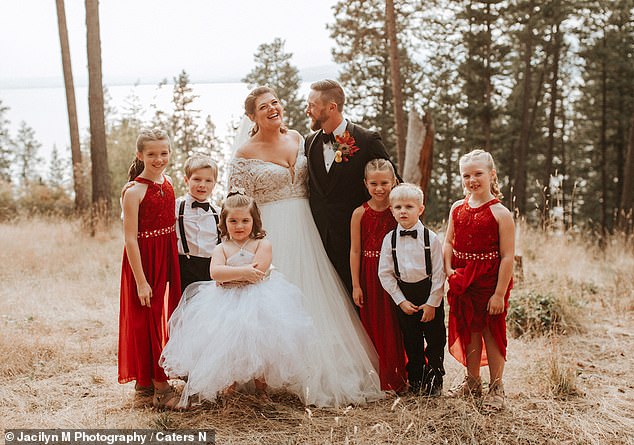 Darci ditched her sugar addition for a ketogenic diet, so she could be there for her kids – Kathryn, nine, Julianna, eight, Rosaleigh, seven, Wyatt, six, Franklin, four, and Annabelle, three (all pictured with Darci and husband Tait)

Darci quickly ditched her carb and sugar-filled diet and instead started following a ketogenic diet, which instead focuses on healthy proteins and fats.

She quickly dropped 196lbs and also underwent vertical gastric sleeve surgery in April 2019, which helped her lose another 140lbs.

After dropping a staggering eight dress sizes and 196lbs, Darci was able to slip into her dream wedding dress and tie the knot with her husband Tait, 30, in September.

She revealed: ‘I never thought I would get to wear my dream dress, and that finding it would be so easy.

‘I bought it off the rack and my sister-in-law made one tiny adjustment to one of the sleeves for me, but other than that it fit like a glove.

Darci’s diet before and after her weight loss

Dinner: Home cooked gluten free, vegetarian meals, such as a ‘Spanish rice’ style quinoa with black beans, avocado and corn and quesadilla from a single corn tortilla and cheese.

‘We spent the month before the wedding at our family cabin turning it into our wedding venue, and that helped me lose the last 10lbs I wanted to before the big day.

‘I hadn’t been that size since I was a freshman in high school, so it was a huge accomplishment for me.’

Darci admitted that at her biggest size, she constantly felt run down and she would feel anxious about small things, such as being unsure if she would fit into restaurant chairs.

She recalled one of her most embarrassing moments, which was when a stool collapsed after she stepped on it while at a fall festival with her kids.

The mother continued: ‘It’s not easy existing in the world at that size. The worst thing was always feeling exhausted and winded. I had no energy. 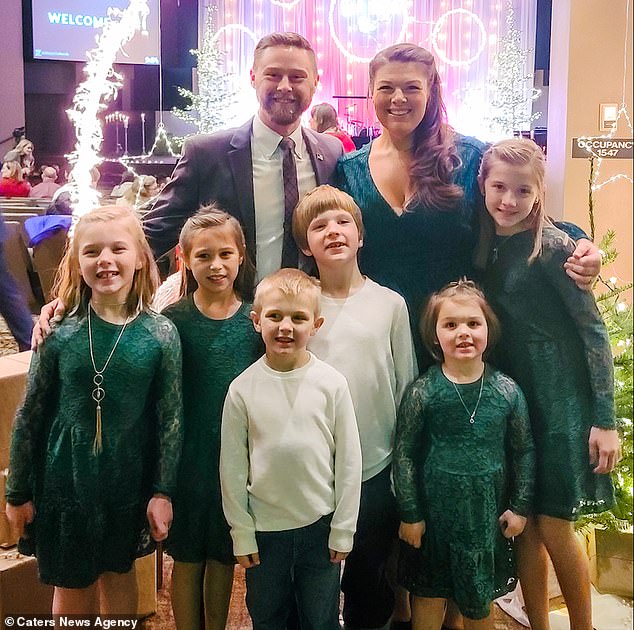 ‘I remember stepping on a stool at a fall festival to get on a hay ride with my daughter and the stool completely crumbling beneath me.

‘Walking into restaurants and being terrified that the chairs would have arms on them was always a big one, too.

‘I never knew if I was going to be able to fit in them or not.’

But Darci managed to drop 56lbs after she adopted a workout routine and switched to a ketogenic diet.

She also consulted with her doctor and underwent a vertical gastric sleeve surgery in April 2019, which helped her lose another 140lbs. 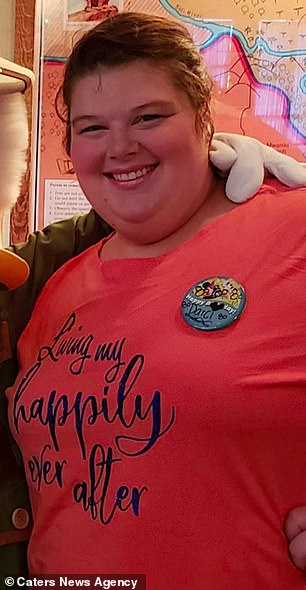 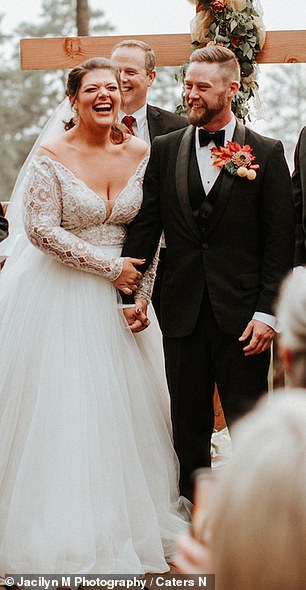 After dropping a staggering eight dress sizes and 196lbs, Darci was able to slip into her dream wedding dress and tie the knot with her husband Tait, 30, in September

Darci and her husband Tait run a blog together called the Hanson Homestead, where they share healthy, family friendly recipes from natural ingredients.

‘Don’t be ashamed or afraid to consider asking for help.

‘I would never go back to the way I ate before. I now eat a vegetarian and gluten-free diet, and feel fantastic.

‘I feel better than I ever have in my life. I don’t have to say no to anything because of my size or athletic ability.

‘I run with my kids, I hike with my husband, I swim and play shop and love every single second of my life.’