As thousands of South Lake Tahoe residents who fled California’s Caldor Fire were cleared to return to their homes this weekend, officials warned there may be an unexpected threat waiting for them: bears.

“The delicate balance between humans and bears has been upset,” Sgt Simon Brown of the El Dorado County Sheriff’s Office told reporters, per the Associated Press.

With humans away for more than a week, the local bears became bolder, making more appearances in centrally located, urban neighborhoods than they usually do. In addition to humans being away, it’s possible that habitat and food source destruction from the wildfire may have compelled the bears to seek refuge in the urban areas, according to SFGate. 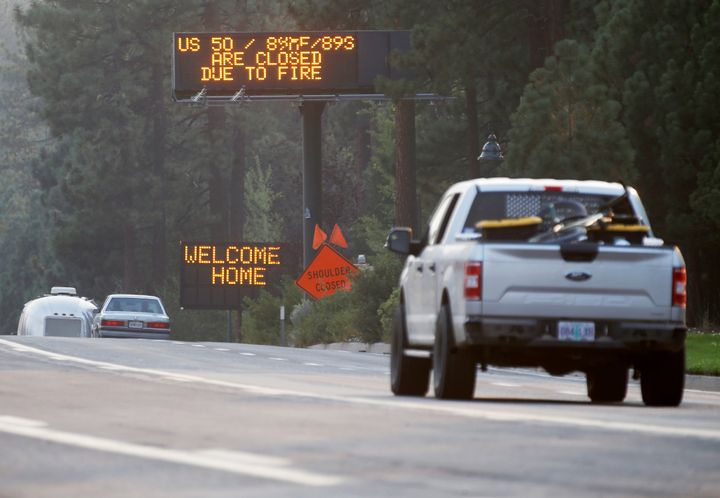 The bears have been strewing garbage around and, in some cases, entering homes uninvited. South Lake Tahoe Police Chief Dave Stevenson told local news station KCRA that the department had gotten reports of 17 break-ins this week, and 15 of them turned out to be perpetrated by bears.

Sgt. Brown told SFGate that it’s “not a crime” for bears to break into homes. And while law enforcement can’t “arrest” the animals, they will try to lure them away from homes, he said.

Bear expert Toogee Sielsch has warned that returning residents should be cautious if they notice any indications a bear could have entered their home ― because the animal could still be inside.

“When you come home and if you find that it looks like a window’s open or door’s open and something has accessed into your house, don’t rush in and definitely don’t block that spot,” Sielsch told KCRA. “It might be a wild animal that has made ingress into your house because that spot’s the only way they’re going to know to get out of your house.”

Authorities lifted the mandatory evacuation orders for South Lake Tahoe and the surrounding areas on Sunday afternoon, downgrading them to a warning as firefighters managed to contain more of the Caldor Fire. Officials noted that the threat of the fire was not totally gone, and that the air remained smoky and especially hazardous to those with health issues.

The rapid growth of the Caldor Fire, which began on Aug. 14, led to the U.S. Forest Service closing nearly all national forests in the state through Sept. 17. Multiple state parks around California have also been fully or partially closed in the wake of a dozen large fires burning across the state.

Though wildfires have historically been a natural ― and even beneficial ― feature of the Western landscape, human-caused climate change and a legacy of counterproductive forest fire suppression have combined to create massive, deadlier and more destructive blazes. European settlers who colonized the U.S. and Canadian West largely implemented the practice of extinguishing wildfires ― rather than letting smaller, less intense fires run their course ― leading to a large buildup of flammable vegetation across the region. And a warming climate has led to significantly hotter and drier conditions in which big fires can ignite much more easily.