A man who has survived sexual abuse and rape and a suicide attempt that left him paralysed for 10 months has revealed how he overcame his troubled past, and is now a coach helping others.

Paul Scates, 39, who lives in Bournemouth, was eight when a close family friend started to abuse him on a regular basis.

Now after multiple suicide attempts and managing to spend £70,000 on credit cards as a result of a manic bipolar episode, Paul has ‘processed’ his experience and helps others.

The mental health campaigner said: ‘It’s my passion to help others and we can all heal. I like to call recovery “discovery”, as it is a journey of stages which slowly builds out resilience. 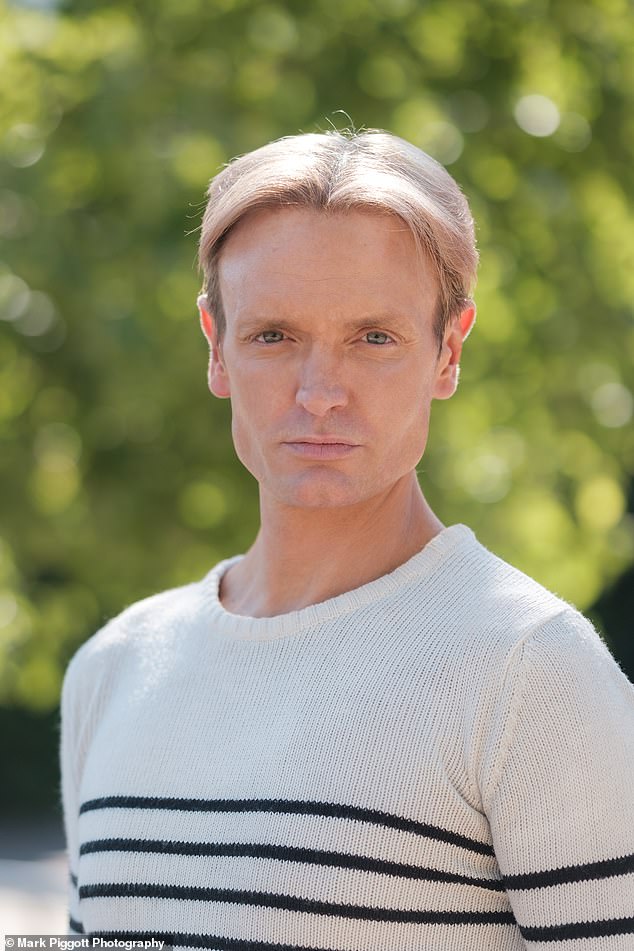 Paul, 39, pictured, is now a wellbeing coach and has worked with various charities including Heads Together to try and help others with their trauma 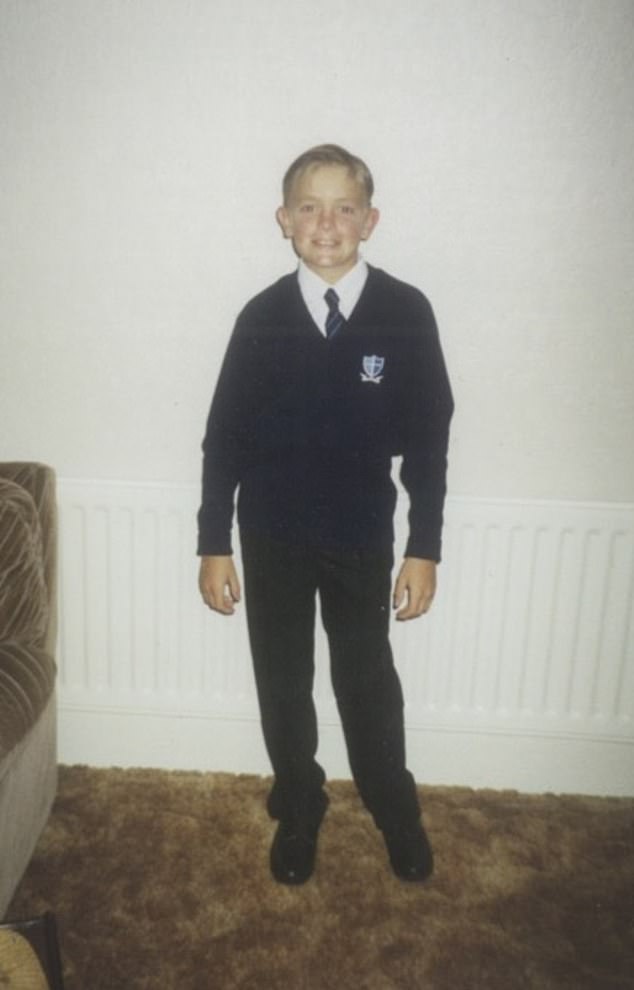 Paul Scates, pictured aged 10 in his school uniform, was abused by a family friend from the age of eight. He now helps others to heal from trauma and with their mental health issues 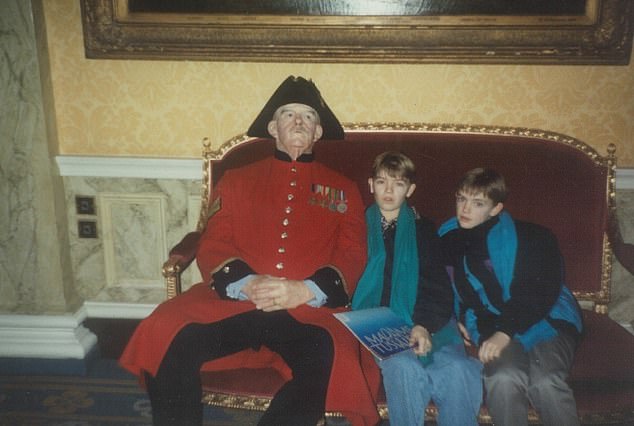 Paul and his brother, Mark, on a trip to Madame Tussauds in London. Paul (centre) was eight-years-old and in the grip of the sexual abuse. He said when he looks at this picture he sees a scared and confused little boy staring at the camera

‘Someone may not know the answers to their challenges but if we invest in them and they have opportunities for help, they will learn how to become the architect of their recovery.

‘I like to see mental health as “mental wealth” as the struggles in my own life, dealing with childhood sexual abuse and rape has put colour into my life.’

Paul, who has bipolar, uses his own experiences with trauma to help others. When he was eight a close family friend started to psychologically and sexually abuse him.

He said that his abuser was well known within the community, and a family friend with the two families often going on trips together or staying at each others houses.

Paul said: ‘The first time anything happened I was asleep and then woke up and completely froze. It was confusing and dark and I wasn’t sure what was happening to me. 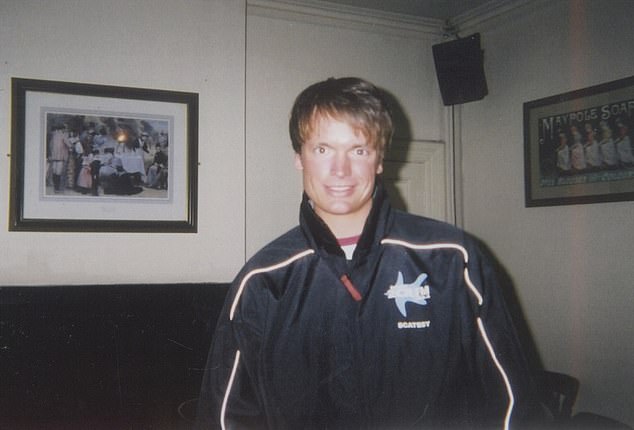 Paul, pictured when he was 18 and using drugs and alcohol, was abused by a family friend as a child and raped by two men when he was a teenager living in London 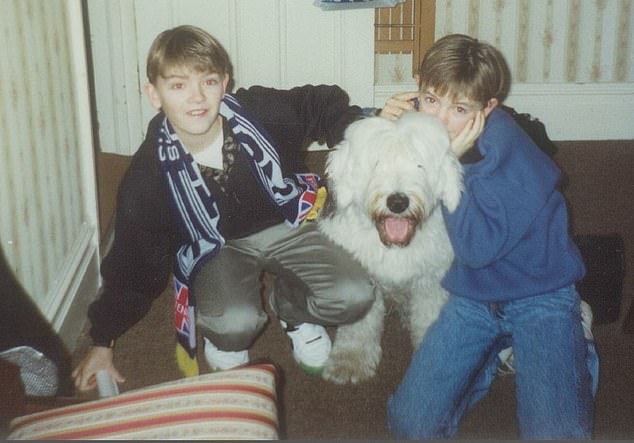 The mental health advocate, pictured aged 11 with his brother Mark and their family dog, was paralysed for 10 months after he jumped out of a first floor window when he was 16

‘After I ran straight to my father and I was scared but couldn’t speak and he thought I had had a nightmare.

‘The next morning I saw the friend while I was brushing my teeth and he said “we’re OK aren’t we?”, and my body just knew it had been him.’

The abuse carried on periodically and Paul worried about speaking out, as he didn’t want to upset his parents and destroy their friendship with the other family.

In his teenage years Paul moved to London and during his time in the capital he was the victim of a horrific crime. While living in a hostel, he was mugged and raped.

Paul’s childhood abuser collected him after the incident and ‘knew right away that the story I had told everyone, because I didn’t want them to know about the rape, wasn’t true.’

After returning to his home Paul hit rock bottom and jumped out of his abuser’s bedroom window, which was on the first floor of his home.

Paul said: ’I don’t know if I wanted to die, I just wanted to get out and for all the pain to stop.

‘The pain was unbearable. My abuser’s daughter found me laying on the floor, unable to move, and she just screamed.

‘While I was in hospital my abuser would come visit and that was when my parents started to realise something was wrong as I’d act differently when he was there.

‘Although I was in pain – mentally and physically – I didn’t want to bring anymore hurt into my house. This man was my parents’ friend after all. 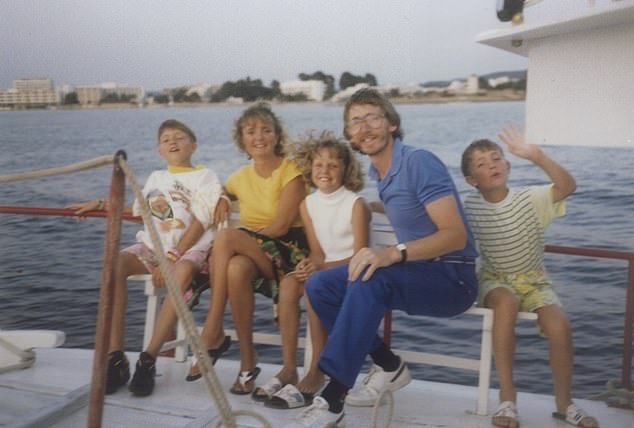 Paul, pictured aged eight during a boat trip with his family, did not tell anyone for years about the abuse he was suffering but he told his father after trying to commit suicide 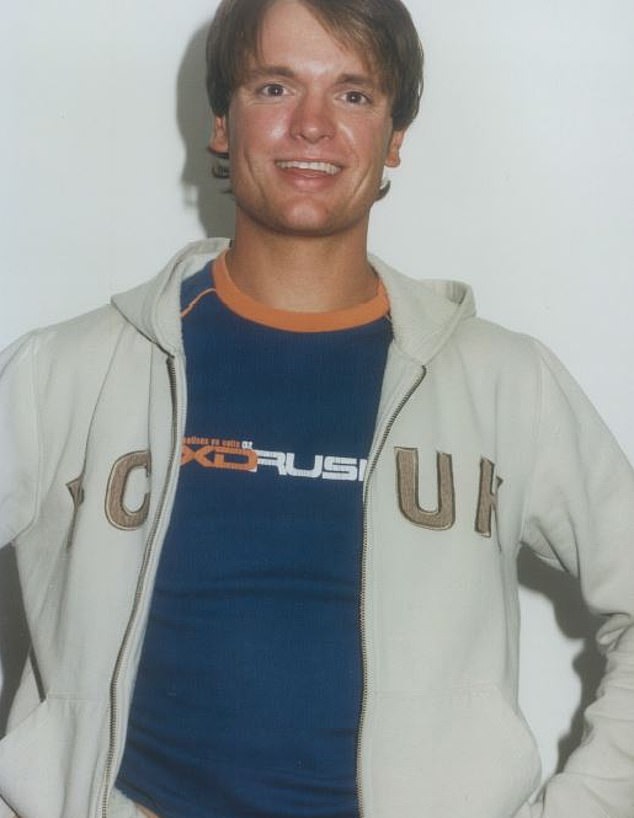 Paul, pictured in an undated photo, also struggled with mental health while he at university and managed to spend £70,000 on credit cards as a result of a manic bipolar episode

‘One day I spoke to my dad and said to him “remember that night when I was little and you thought I’d had a nightmare? It wasn’t a nightmare.”

‘I didn’t want to upset my dad, but he just told me “that man has stolen enough of your life”.

Although Paul’s abuser was reported to the police, he has never been charged and Paul said he is now on the run. The two boys who raped him in London were later jailed for another crime.

Even after the abuse stopped Paul struggled with his mental health and managed to spend £70,000 on credit cards as a result of a manic bipolar episode while at university. 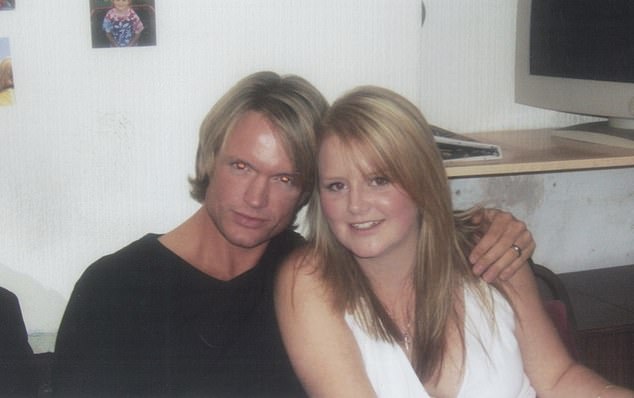 Paul, pictured with his cousin Natalie the night before he jumped out of the window, broke his back and was paralysed for 10 months after breaking his back. He said during the suicide attempt there were no thoughts or feelings going through his mind, he just felt vacant

Paul said that he thought buying clothes, gadgets, holidays and drinks for friends would get people to like him.

His spending finally stopped when his parents intervened and used £60,000 of their retirement savings to help Paul pay back his debt.

Paul paid an additional £5,000 back over a number of years and the lenders wrote off £5,000 because he had set up repayment plans and paid off other debt.

Looking back on what happened to him now, Paul said hat he has ‘processed’ the abuse and wants to see justice happen so that his abuser ‘cannot hurt anyone else.’

Paul now helps others to turn their lives around after experiencing abuse, mental illness or another traumatic event, and also advises the key mental health charities in the UK. 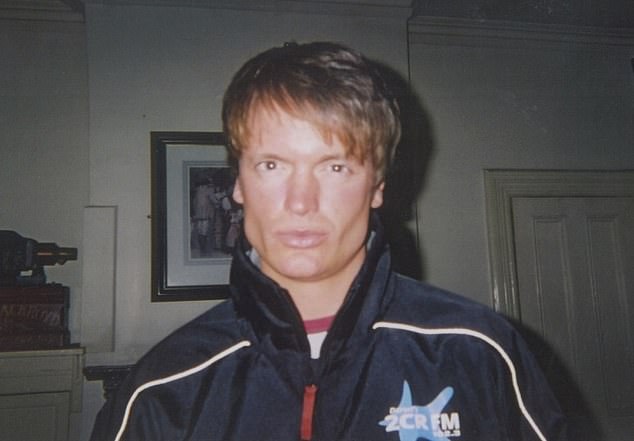 Paul, pictured at 18, now helps others to turn their lives around after experiencing traumatic events and has worked with a number of clients to try and improve their mental health 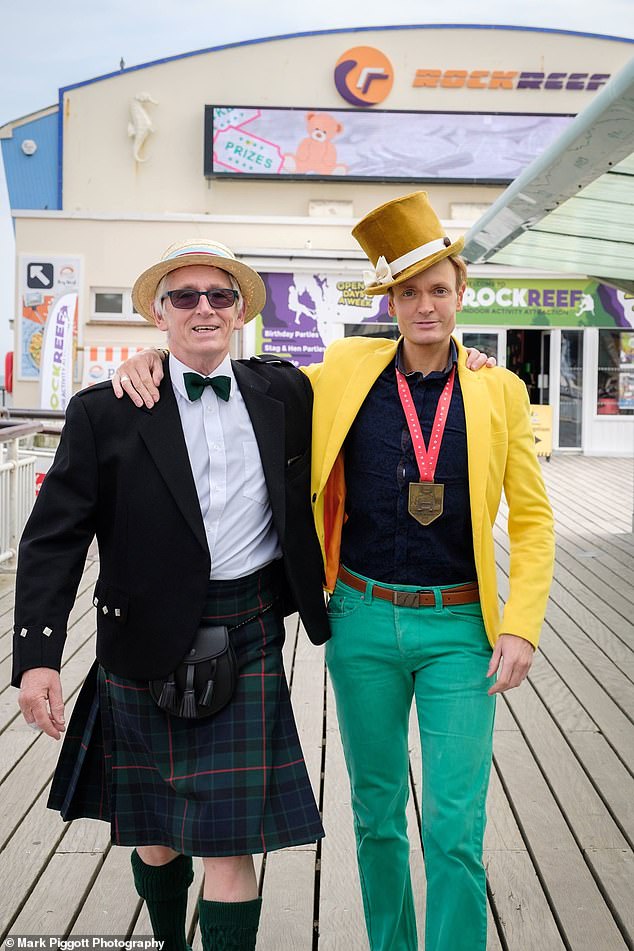 Paul and his father Norman, pictured together on Bournemouth pier, both have bipolar and are about to go on a tour of the UK called the Bonkers Tour

As a self-trained wellness coach, he has worked with dozens of people and has often takes unusual approaches to helping them.

For example while working with a cocaine addict, Paul talked through their problems while running – as the client said doing the exercise recreated the buzz of taking drugs.

He said: ‘It’s important that we ask why people, especially children, don’t want to do join in or something. There’s always a reason and it might be the key to helping them.’

He is also passionate about raising awareness about mental health and ran the London marathon in 2017 for Heads Together, the charity supported by Prince William and Harry. 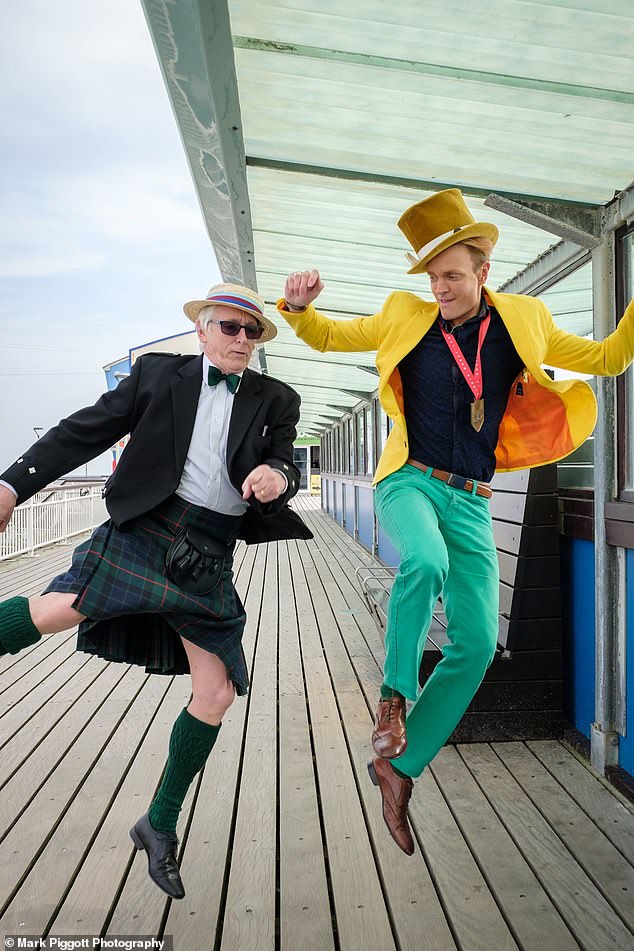 Paul, pictured with his father, said it is his ‘passion to help others’ and that ‘we can all heal’

Now Paul is due to start a father son tour with his father Norman, who is also Bipolar, called the Bonkers Tour which will be a humorous take on mental health.

Paul and Norman will go around the UK in a bus, delivering their mental wealth programme to schools, colleges, universities, public events and employers trying to help as many people as possible.

Father and son will answer the questions people never dare ask at stops including Bournemouth, London and York in May.